Germany: Relationship Between A User's Comment And A Specific Viewable Object: Non-Technical

The application underlying this decision relates to the area of multimedia content. However, the European Patent Office refused to grant a patent that deals with a relationship between a user's comment and a specific viewable object. Here are the practical takeaways of the decision T 1822/18 (Augmenting user-input information/ARRIS ENTERPRISES) of November 24, 2021 of Technical Board of Appeal 3.5.07:

Lowering the cognitive burden for a user is not a technical effect.

According to the Board in charge, the claimed invention relates to augmenting user-input information. The Board summarized the invention as follows:

1. The application relates to augmenting user-input information associated with a media source such as a movie (description as published, paragraph [0002]). According to the background of the invention (description, paragraph [0003]), various devices exist that provide a source of viewable media content, such as televisions, computers and mobile devices. Viewers of such media sources may wish to provide some type of commentary related to what is being viewed.

Some services offer a viewer the opportunity to provide a comment that is then viewable by others who follow the viewer or who visit the web page hosting the comment. The comment is often general and easily assigned to the media content as a whole. In other cases, however, the comment is specific to a single portion of the content. This can be confusing, since a comment directed to a specific portion, for example, can lack relevance to a user outside the context of that specific portion of the content. A user may often wish to obtain additional information about a specific portion of content, people or objects viewed in the content, and this can be challenging. 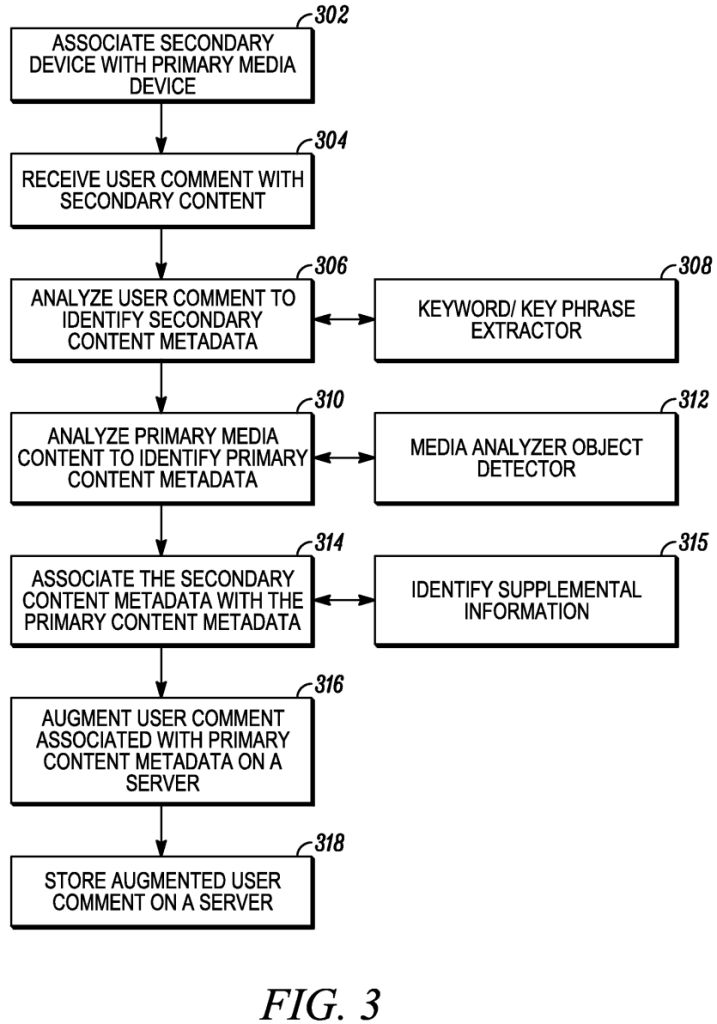 Claim 1 (main request - numbering added by the Board)

[F1] A method of augmenting user-input information (109), the method comprising:

[F4a] wherein the user-input information comprises a user comment responsive to the display of the primary media content,

[F7] wherein the primary-content metadata comprises information relating to a specific viewable object displayed in a scene in the primary media content, and

During the appeal proceedings, as a first step, the Board in charge determined the distinguishing features over the closest prior art document D1:

2.5.2 The board agrees with the examining division that the method disclosed in document D1 automatically creates an association between the user comment and the primary-content metadata, this metadata comprising, for example, the content ID and point in time (D1, paragraphs [0084], [0085], [0088], [0104], [0109] and [0114]). However, the board agrees with the appellant that features F6a and F7 are not disclosed in document D1. Consequently, the board concludes that the distinguishing features are the features F4b, F6a and F7. ...

The Appellant argued the technical effect produced by the above-cited distinguishing features as follows:

2.6 According to the appellant a technical effect of the distinguishing features was that an association between the user-input information and a specific viewable object in the primary media content could be generated automatically using only the user's comment and the primary-content metadata. In other words, the only user-input information that was used to generate the association was the user's comment (statement of grounds of appeal, page 3).

Then, the Appellant defined the technical problem:

2.6.2 The appellant argued that in the light of the aforementioned technical effects the objective technical problems solved were: (i) how to adapt the method of document D1 to work with different devices, (ii) how to reduce or eliminate the disruption to viewers due to interaction with the primary device, and (iii) how to remove the possibility of incorrect "point and click" operations.

However, the Board in charge did not agree to this assessment:

2.7 Regarding the alleged effects of the distinguishing features with respect to avoiding the "point and click" operations used in the method disclosed in D1, there is nothing in claim 1 which precludes the use of "point and click" operations for user input, including for inputting the text of a user comment (for example by using a pointing device to select letters on a displayed keyboard). Moreover, according to the established case law, lowering the cognitive burden for a user is not a technical effect (see, for example, T 1741/08, Reasons 2.1; T 1834/10, Reasons 5). This applies also with respect to diverting the user's attention as well as in the case of multiple viewers.

2.7.1 Furthermore, the board does not see that lowering a burden for the user is derivable from the distinguishing features over substantially the whole range claimed (see G 1/19, Reasons 82). Indeed, the claimed subject-matter is broad, and it is not limited to: a particular form of human-machine interaction, the case of multiple viewers, or a commenting user with special needs.

2.7.2 Regarding the possible generation of a wrong association in the method disclosed in document D1, the board informed the appellant during the oral proceedings that it was not convinced that the association created by the claimed method was necessarily one that was intended by the user. Indeed, the association created depends, among other things, on the availability of suitable primary-content metadata and the time period for receiving a comment after a user has viewed a specific media content on the display.

As a result, the Board arrived at the conclusion that the distinguishing feature would only relate to the presentation of information and would thus lack further technical considerations:

2.8 Contrary to the appellant's submissions, the board considers – in line with the examining division's opinion (see the contested decision, point 13.4; see also the annex to the summons of 10 May 2017, point 4.3) – that the distinguishing features are aimed at the presentation of information to the user for a non-technical purpose (for informational and commercial applications, for example; see the description, paragraph [0035], for an example application). In particular, the relationship between a user's comment and a specific viewable object displayed serves only for the purpose of displaying this relationship with the aim of enhancing ("augmented user comment") the informational content presented to a user.

In view of the above, the distinguishing features do not contribute to a "further" technical effect (see decision T 1173/97, OJ EPO 1999, 609). Moreover, the board does not see that the distinguishing features involve any "further technical considerations" (see opinion G 3/08, OJ EPO 2011, 10, Reasons 13.5.1). Instead, the generation of the association between the parsed user-input metadata and the primary-content metadata by means of analysing the metadata can only be seen as a non-technical algorithm underlying the claimed method. Claim 1 does not specify how this non-technical algorithm underlying the distinguishing features is specifically implemented by exploiting particular computer hardware characteristics, for example, which may, at least in certain circumstances, allow a specific technical effect to be derived within the computer system in the sense of a "further" technical effect (see decision G 1/19, Reasons 51).

Therefore, at the end of the hearing, the Board in charge dismissed the appeal due to lack of inventive step.