The challenge of transactions in particular takes into account that it is often attempted in pre-insolvency phases to deprive the creditors of access to the debtor's assets by way of objectively unjustified transfers of assets or to put individual creditors in a better position.

The insolvency administrator is entitled to challenge transactions entered into prior to the filing for insolvency and which place the creditors at a disadvantage.

The term "transaction" has to be interpreted broadly. It includes any action which has a legal effect, e.g. promissory contracts, contractual obligations, real acts (Realakte), acts of legal procedure, resolutions taken by corporate bodies, but also omissions.

Placing Creditors at a Disadvantage

The placement of creditors at a disadvantage must be assumed where the assets that are meant to satisfy the creditors were reduced from an economic point of view. Therefore, a disadvantage can be given in case of a decrease in assets, an increase of liabilities, an aggravation of access possibilities or an aggravation or a delay of enforceability. The challenge rights partly differentiate between direct and indirect disadvantages. A direct disadvantage is given where the disadvantages relating to a transaction occur in the debtor's assets without further circumstances, e.g. the sale of an asset below value. In contrast, it is sufficient for an indirect disadvantage, if beside the transaction itself additional circumstances arise that cause the adverse effect on the creditors. For example, this is the case where the debtor in fact receives an equivalent consideration which, however, is irrecoverable.

The contemporaneous exchange of equivalent value, a so-called cash transaction (Bargeschäft), is privileged. In such case, a challenge of the transaction is explicitly excluded by law, with the exception of a challenge based on a willful prejudice or an incongruent coverage.

The burden of proof for any placement of the creditors at a disadvantage is with the insolvency administrator. In this regard, however, the law provides for several alleviations of the burden of proof.

In the event that the transaction was concluded between the debtor and a related party (nahestehende Person), less stringent requirements for a challenge apply. These parties normally have better opportunities to be informed about the financial circumstances of the debtor and are, by experience, more likely willing to collaborate with the latter to the detriment of the creditors. If the debtor is a natural person, related parties are, inter alia, spouses, husbands or relatives. Related parties of a corporate entity are, in particular, members of the management or supervisory board and personally liable shareholders.

Furthermore, persons who have the opportunity to inform themselves about the financial circumstances of the debtor due to a relation under corporate law or a service contract are related parties to the respective corporate entity, as well.

CHALLENGE RIGHTS AND THEIR PREREQUISITES 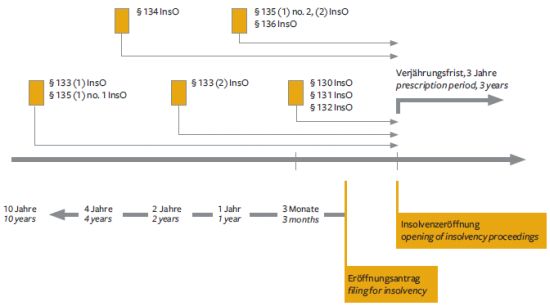 As a rule, the shorter the time period between the transaction and the insolvency filing, the lower are the prerequisites for the challenge.

Furthermore, the case law provides the insolvency administrator with several generous alleviations of the burden of proof regarding the knowledge of the addressee of the challenge of the debtor's intent to disadvantage his creditors. For example, a subsequently concluded standstill agreement or a subsequent agreement to pay in installments can already establish the subjective prerequisites for a challenge.

Currently, the legislator is discussing adjustments to the prerequisites for a challenge pursuant to Section 133 InsO.

The insolvency administrator can also challenge the repayment or the collateralization of a shareholder loan or an equivalent claim (Section 135 InsO). A collateralization, for instance, would be the provision of a surety by the shareholder for a loan granted by third parties. Repayments can be challenged if they occurred within one year prior to the insolvency filing. The providing of security can be challenged if such transaction was effected within ten years prior to the insolvency filing.

Furthermore, the insolvency administrator can challenge the satisfaction of a third party's claim for repayment of a loan if such claim was secured with a security granted by a shareholder of the debtor and if such transaction was transacted within one year prior to the insolvency filing; the same applies for claims which are economically equivalent to loans.

The aforementioned challenge rights basically have an equal, independent status, i.e. they do not exclude each other and can be fulfilled simultaneously.

Any assets of the debtor sold, transferred or relinquished under the transaction subject to the challenge must be restituted to the insolvency estate. Also, this claim is subject to interest-bearing. The claim for restitution becomes due when the insolvency proceedings are opened. The restitution has to be made in kind. Where a restitution is not possible, compensation of value has to be paid.

Claims of the Addressee of a Challenge