New Balance is an American sports footwear and apparel brand that has been around since 1906. The famous "N" logo of the brand wasn't featured until the '70s when New Balance released the 320 sneakers. Nowadays, "N" has become the iconic symbol of the brand.
Recently, the Supreme Court ("SPC") issued two retrial decisions which withdrew the Beijing High People's decisions and determined, due to constituting similar trademarks to New Balance's cited Trademarks, the said two Disputed Trademarks No. 7976207 and No. 8520182 of N logo registered by Qierte Co, Ltd ("Qierte") were invalidated. 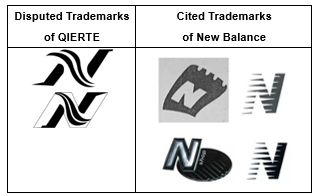 Beijing Intellectual Property Court overturned TRAB's decision and determined the trademarks constitute similar trademarks. Because both 2 Disputed trademarks and all Cited trademarks can be recognized as Capital N letter, and the evidence provided by New Balance could prove they had enjoyed certain reputation on its N logo, thus the coexistence would arouse confusions. [(2015) Jing Zhi Xing Chu Zi No.3615-3616]

Previously on Qierte - Not a coincidence

Since 2014, New Balance has initiated multiple trademark infringement lawsuits against Qierte and its affiliated company New Bunren(China) Sporting Goods Co., Ltd., and has applied for invalidation of the latter's "N" logo trademarks. 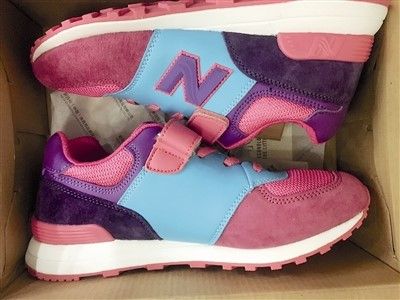 The infringed sneakers at issue - Image via: Hangzhou Daily Newspaper

Therefore, the two defendants were ordered to immediately stop the manufacture and sale of sports shoes that violated the N logo, and compensate New Balance for economic losses and rights protection expenses total of RMB 3.3 million. Even if both two parties further appealed to Hangzhou Intermediate People's Court, and cases are pending in second instance, obviously, the winning of New Balance is a good start for the following invalidation disputes. [(2016) Zhe 8601 Min Chu No.296]

Let's go back to the subject N logo invalidation litigations. After full of twists and turns during first instance and second instance, the SPC make the seemingly more reasonable final decision to New Balance. The controversial issue of the retrial before the SPC is still whether the Disputed trademarks and the Cited trademarks are similar. New Balance pointed out the comparison of similarity should not focus on the logos per se, but should comprehensively consider the factors including distinctiveness and reputation of the trademark and the subjective intention of the trademark applicant etc.

In addition, the evidence provided by New Balance could prove it had enjoyed certain reputation before the filing date of Disputed Trademarks. As competitor in the same industry, Qierte should have a considerable understanding on New Balance's prior trademarks, nevertheless, Qierte use the easily confused trademark in actual business, which cannot be deemed as "good faith".

In the light of above, the Cited Trademarks and Disputed Trademarks constitute similar trademarks, and the SPC overturned the second instance judgement.

Even if the SPC didn't precisely pointed out the malicious and confusing use by Qierte in actual business activities influence the judgment similarity, it can be speculated from the description of SPC judgment and Court debates, the Judge has comprehensively considered the subjective intentions of confusing use made by Qierte.

Last year, Beijing High People's Court issued Guidelines for the Trial of Trademark Right Granting and Verification Cases, of which elaborate the application of similarity judgment could be comprehensively considering the below factors and their interaction based on whether it is easy to create confusion for the relevant public:

Actually, New Balance has been troubled by the "copycat" shoes bearing different N logo since it entered China. One example is Qierte Co., Ltd. from Jinjiang City, Fujian Province mentioned in this article.

From my personal understanding, N logo, as simple as it is, wouldn't just change the look of the sneakers but bring fames to New Balance as one of the top sport companies.

The quick search into the Chinese trademark database disclosed different N logo trademarks co-existing in class 25, which are owned by some shoe-making enterprise. From the perspective of consumers, will you feel confusions by the shoes bearing these different N logos?

ARTICLE TAGS
China Intellectual Property Trademark
POPULAR ARTICLES ON: Intellectual Property from China
Patent Law in India
Anand & Anand
The Patents Act 1970, along with the Patents Rules 1972, came into force on 20th April 1972, replacing the Indian Patents and Designs Act 1911. The Patents Act was largely based on the recommendations of the Ayyangar Committee Report headed by Justice N. Rajagopala Ayyangar. One of the recommendations was the allowance of only process patents with regard to inventions relating to drugs, medicines, food and chemicals.
Difference Between Passing Off And Infringement Of The Trade Mark
Khurana and Khurana
A Trade mark may be defined as a lawfully protected abstract, word, symbol, color, mark, slogan or a mixture of those related to an organization or a selected product that differentiates it from the others accessible within the market.
All You Need To Know About "Well-Known Trademarks"
Khurana and Khurana
With coming up of the new Trade Mark Rules 2017, a new procedure has been created that allows the Registrar to proclaim a particular trademark as "well known".
Process: Trademark Registration In India
Intepat IP Services Pvt Ltd
Many entrepreneurs do not comprehend the importance of a TM search.
Concept Of Fair Use And Fair Dealing In Copyright
S&A Law Offices
Fair use supports "socially laudable purposes," typically, if not exclusively, involving the use of the copyrighted work by a second author
Does AI Qualify As An ‘Inventor' Based The Statute In Indian Patents Act, 1970?
InvnTree Intellectual Property Services Pvt. Ltd.
In a first, the Indian Patent Office has objected to recognizing AI as an inventor in a recent application numbered 202017019068 citing the provisions laid in Section 2 and Section 6 of The Indian Patents Act, 1970.
FREE News Alerts
Sign Up for our free News Alerts - All the latest articles on your chosen topics condensed into a free bi-weekly email.
Register For News Alerts
Article Tags
China Intellectual Property Trademark
Related Articles
国家知識産権局、知的財産権公共サービスの5カ年計画を発表 Kangxin
中国、2021年1万人当たり高価値発明特許保有件数7.5件に Kangxin
명예 ｜ 첸백스가 발표한'2022 대중화구 법률지침', 캉신이 차트에 올랐다! Kangxin
캉신 소장, 아시아 IP2021년도 중국 지적재산권 전문가 100위권에 선정 Kangxin
희소식이 잇달아 전해진다.캉신이 2022 The Legal 500 아시아태평양 차트에 선정! Kangxin
Mondaq Webinars
Diverse Liquidity Options for Complex Cayman Islands Fund Structures
Travers Thorp Alberga
Webinar Grand Cayman Cayman Islands
Global Contract Management and Process Improvements
Nexdigm Incorporated
Webinar Chicago United States
More Webinars
Comparative Guides
Cartels
Franchising
International Arbitration
Merger Control
Trademarks
More Guides
Mondaq Advice Centres
Global
Trademarks in SAARC Countries
More MACs