The Situation: The NMPA and CNIPA recently jointly issued the Implementation Measures for the Early Resolution Mechanism for Drug Patent Disputes. The CNIPA and China's Supreme People's Court have each issued, separately, rules for an Article 76 Proceeding that a patent holder could opt for against a generic drug applicant.

The Result: The three recent legal rules have unveiled detailed mechanisms of China's patent linkage system. Unlike in the United States, patent holders may choose to commence an Article 76 proceeding by means of a civil action before the court and/or an administrative determination before the CNIPA. The NMPA will grant a nine-month stay for marketing approval of the generic drug application pending a judicial or administrative decision. The first generic drug applicant that successfully challenges the validity of listed patents and obtains marketing approval will be granted a 12-month market exclusivity.

Looking Ahead: International patent holders should be mindful in selecting patents for listing, actively prepare for patent validity challenges for the listed patents, and be ready to commence an Article 76 proceeding by means of a civil action and/or an administrative determination within 45 days after a generic market application is disclosed.

China has recently unveiled its own version of a patent linkage system that has been highly watched by stakeholders and industry observers.  This new system will also create a new form of pharmaceutical patent litigation in China.

Details of China's early resolution mechanism were further outlined in three legal measures that were promulgated and came into effect on July 4 and 5, 2021, namely:

Article 76 of the Chinese Patent Law has been commonly perceived as China's Hatch-Waxman Act. However, the early resolution mechanism under Article 76 and subsequent implementing measures have also featured a number of marked Chinese characteristics.  International pharmaceutical patent holders and practitioners need to heed this and also take steps to manage how this new mechanism will work in the larger context of the Chinese patent litigation ecosystem. As generic drug competition intensifies in China, industry stakeholders may need to consider how to leverage this new mechanism in China and address possible accelerated invalidity challenges in China while coordinating parallel proceedings in the United States and elsewhere.

A generic drug applicant seeking marketing  authorization will be obligated to file a patent declaration based on the status of the listed patent (if any) on the CPIRPMD, in particular:

In fact, Article 76 proceedings also apply to applications for biosimilars, although there will be neither a 9-month stay period for marketing approval pending a judicial or administrative decision, nor a 12-month market exclusivity period.

Choosing Between a Civil Action and an Administrative Determination 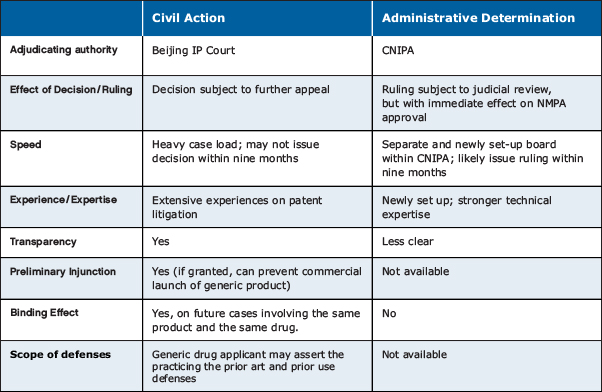 The following summarizes several salient issues a patent holder should consider in deciding whether to commence a civil action or an administrative determination:

1. Under China's patent linkage system, the market exclusivity period is tied to a successful patent invalidity challenge, and it is not clear whether such invalidity challenge needs to be filed after the Type IV declaration. Therefore, patent holders need to be mindful in selecting certain patents for listing on CRIPRMD, while keeping others away from Type IV challenges. As to the patents that are selected for listing, patent holders need to be well prepared to defend their validity.

2. Legal practitioners should coordinate potential parallel proceedings in China and other jurisdictions, such as the United States, at an early stage, being mindful of differences in civil procedure or legal systems that may lead to contrary positions taken, or strategies and arguments adopted in a non-U.S. litigation. U.S. practitioners may also make use of the potential shift of burden of proof offered by the new mechanism and seek to adopt strategies that are not originally applicable due to the lack of U.S.-style discovery.

ARTICLE TAGS
China Food, Drugs, Healthcare, Life Sciences Food and Drugs Law Intellectual Property Patent
POPULAR ARTICLES ON: Intellectual Property from Worldwide
Patent Law in India
Anand & Anand
The Patents Act 1970, along with the Patents Rules 1972, came into force on 20th April 1972, replacing the Indian Patents and Designs Act 1911. The Patents Act was largely based on the recommendations of the Ayyangar Committee Report headed by Justice N. Rajagopala Ayyangar. One of the recommendations was the allowance of only process patents with regard to inventions relating to drugs, medicines, food and chemicals.
Assignment And Licensing Of Copyright
Singh & Associates
Copyright is a protection given to the creators of certain types of works as an acknowledgment to their intellectual input
New Aussie Domain Name
Davies Collison Cave
A new Australian domain name, .au will be available from 24 March 2022. Australian individuals, businesses, and organisations will be able to register their existing and new domain names in the .au domain name space...
Patent Specification - Where The Rubber Meets The Road
Singh & Associates
In order to obtain a patent, an applicant must fully and particularly describe the invention therein claimed in a complete specification.
Compulsory Licensing In India
Khurana and Khurana
WIPO defines patent as an exclusive right granted for an invention, which is a product or a process that provides, in general, a new way of doing something, or offers a new technical solution to a problem
What Can Be Patented In India?
Intepat IP Services Pvt Ltd
Sections 3 and 4 of the Indian Patents Act, 1970 specifically state exclusions to what can be patented in India.
FREE News Alerts
Sign Up for our free News Alerts - All the latest articles on your chosen topics condensed into a free bi-weekly email.
Register For News Alerts
Article Tags
China Food, Drugs, Healthcare, Life Sciences Food and Drugs Law Intellectual Property Patent
Related Articles
広東知的財産権保護センター、粤港澳大湾区実用新案価値分析レポートを発表 Kangxin
どのように技術成果を保護したほうがよいか？商業秘密? Or 特許権? Kangxin
先行技術に「逆示唆」があるかについての判断 Kangxin
Inventor Compensation In China Toby Mak
国家知識産権局、『商標審査審理指南』の公告（第462号)を公布 Kangxin
Mondaq Webinars
What Can Be Achieved in Luxembourg in Terms of Securing Assets in Pre-Trial, Pre-Enforcement Situations?
Bonn Steichen & Partners
Webinar Luxembourg Luxembourg
Hot Topics in Fund Finance [REPLAY]
Cadwalader, Wickersham & Taft LLP
Webinar New York United States
More Webinars
Comparative Guides
Cartels
Franchising
International Arbitration
Merger Control
Trademarks
More Guides
Mondaq Advice Centres
Global
Trademarks in SAARC Countries
More MACs