In view of heightened socio-economic and political uncertainties in 2016, global economic activity during the year experienced a decline in the overall growth rate, from 3.4% in 2015 to 3.1%. As reported by the International Monetary Fund, most major economies recorded a deceleration in growth, except Canada.

The advanced economies grew by 1.7%, compared to 2.1% in 2015. The US posted a lackluster growth of 1.6% relative to the 2.6% achieved in 2015, as weakness in non-residential investment weighed on growth. The Caribbean region had an estimated economic growth of 3.4% in 2016, a deceleration compared to the 4.0% of the previous year.

Against this global backdrop, the Cayman Islands marked another year of economic resilience in 2016. Gross Domestic Product (GDP) is estimated to have improved by 2.7% during the year, albeit it represents a slight moderation from the 2.8% growth in 2015.

For the Cayman Islands, growth in the first quarter of 2017 was estimated at 2.0%, consistent with the overall forecast for the year of 2.1%. The slower forecast growth relative to 2016 is associated with the expected softening of growth in capital investments compared to the peak-level construction activities which started in 2015. See Figure 1. 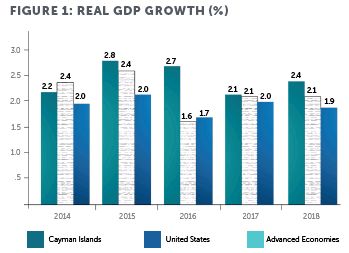 Looking forward, an improved growth of 2.4% is forecast for 2018 as a number of domestic industries are expected to benefit from the completion of ongoing infrastructure projects while new ones are scheduled to start such as the George Town cruise berthing facility and a cargo port.

In 2016, all domestic industrial sectors showed expansion in output with the exception of hotels and restaurants which had a stable level of economic activity. In the first quarter of 2017, GDP growth continued to be broad-based, led by construction, electricity and water supply, wholesale and retail trade and transport, storage and communication. For the rest of 2017, all sectors are forecasted to contribute to GDP growth.

The financial and insurance services sector which accounted for approximately 40.5% of GDP was estimated to have expanded by 1.5% in 20161. Despite relatively depressed demand from external markets, evidenced by declines in registrations across most financial segments, growth in the banking sector was boosted by continued expansion in domestic credit. Insurance services grew by 0.4% as a rise in health insurance claims subdued the growth in premiums.

Economic activity in the real estate, renting and business activities sector, Figure 2b, was estimated to have increased by 4.6% in 2016. In the real estate industry, the value of traded properties trended up by 4.5% while volume increased by 3.0%. Indicators of business service activities (mainly legal and accounting) supported an expansion in 2016, such as partnerships which increased by 11.5%. For the first quarter of 2017, growth in the sector moderated to 0.5% as both real estate and business activities slowed. The construction sector, Figure 2c reported another year of robust growth in 2016 of 4.5%, driven by major infrastructure, property development and hotel projects. Construction activity in the first quarter of 2017 accelerated, registering a growth rate of 7.3% as indicated by the importation of building materials. The overall growth forecast for the sector in 2017 is 4.1%. 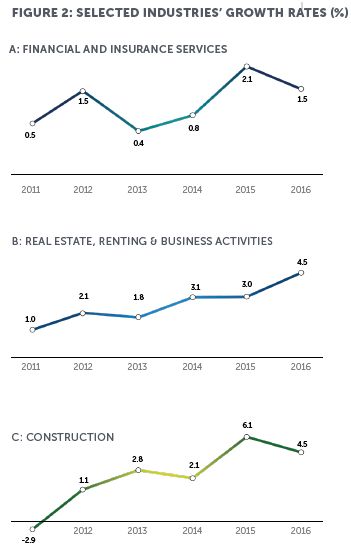 The hotels and restaurants sector was hampered in 2016 by a decline in cruise visitors which offset a marginal increase in stay-over arrivals. The sector also weakened in the first quarter of 2017 as tourist arrivals fell; however, a revival is foreseen for the rest of the year as the US economy picks up. The opening in late 2016 of a new high-end hotel is also expected to boost demand.

The robust economic growth in recent years was largely supported by a low inflationary environment where lower global oil prices pushed down fuel-related costs, and a slowdown in the expansion of government spending tempered inflation-inducing growth in domestic demand. The latter continued to be driven by government fiscal policy which is committed to curtailing government debt without further introducing new tax measures. However, a general recovery in domestic demand and higher international commodity prices, including fuel prices, contributed to the 1.9% Consumer Price Index (CPI) inflation rate in the first half of 2017, coming from -0.6% in 2016 and -2.3% in 2015. The housing and utilities sector comprise the largest group of goods and services influencing the headline inflation rate. Their combined price index dipped by 2.9% in 2016 before recovering to 3.4% in the first half of 2017. Removing the impact of this group from the headline inflation shows that changes in the prices of other goods and services have remained relatively small as seen from Figure 3. 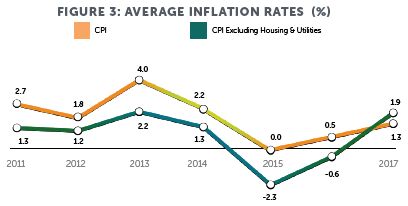 The government supported domestic growth directly by the granting of concessions to development projects, and by reducing tax rates such as those for the importation of building materials. More importantly, it created a stable macroeconomic environment by achieving its commitment to a debt-reduction strategy in the context of the Framework for Fiscal Responsibility (FFR). As at the end of 2016, the core government's fiscal surplus stood at $101 million while its outstanding debt declined by 5.3% to settle at $483.9 million (or 16.5% of GDP). See Figure 4. The core government's outstanding debt is expected to be reduced further to $451.1 million by the end of 2017. Since the majority of debt is payable to the domestic banking sector, the central government's debt reduction eased down the pressure for higher domestic interest rates, particularly those for local industries that rely on bank financing. The government has also given its commitment to reduce its debt burden by half over the next two years consequent on the partial repayment of the bullet bond which matures in 2019 and a refinancing of the remainder.

Hon. Minister Roy McTaggart, Minister of Finance and Economic Development is a former chairman of the Board of Cayman Airways, a member of the Commission for Standards in Public Life and is chairman of the Young Caymanian Leadership Foundation.

He has been active in many roles in the community including serving in several posts with the Cayman Islands Chamber of Commerce, with two years as president. He has also been the treasurer of the Church of Christ and enjoys mentoring Caymanian students in need of positive role models. He was a member of the Board of the Cayman Islands Stock Exchange. Minister McTaggart joined KPMG in the Cayman Islands in 1985, transferred to its Orlando office in 1986, and returned to the Cayman Islands in 1988. He was admitted to the partnership in 1991, became joint Managing Partner in 2003 and appointed Managing Partner in 2007. He was Managing Director of KMPG in the British Virgin Islands from 2007-2012. He served as Councillor to the Ministry of Health and served as interim Minister at times from 2013-2017. For the 2017-2021 term he is serving as Minister for Public Finance and Economic Development.

ARTICLE TAGS
Cayman Islands Employment and HR Contract of Employment Finance and Banking Financial Services Insurance Insurance Laws and Products Strategy Economic Analysis
POPULAR ARTICLES ON: Strategy from Cayman Islands
Legally Binding Electronic Signatures - Information On The Adaption
NAGELE Attorneys at Law LLC
As of now, electronic documents and signatures are legally binding for almost all business and personal transactions throughout the EU.
Economic Substance Update
Collas Crill
Companies will be required to confirm the above details to their Registered Agent within 6 months of the end of the first applicable financial period, as above.
The Evolution Of The Partnership As A Business Vehicle
Bedell Cristin Cayman Partnership
At its most basic level a partnership requires no formalities or registration and is the simplest manner in which to carry on a business. Partnerships have been used for many centuries and were initially governed by common law rules that evolved to regulate both the dealings of the partnership with third parties, and the dealings of the partners with one another.
Pivot To Green – The Next Step For Private Capital
Walkers
Trustees that are able to offer clients an ESG-compliant structure will be satisfying an increasingly popular and fundamental criteria for UHNW individuals and families.
The Six Characteristics Of Customer Champions
KPMG Luxembourg
Here's a slightly different travelogue on Luxembourg: this summer, my colleagues and I travelled the country from east to west ...
Top 10 Challenges Of Doing Business In Costa Rica
TMF Group
Costa Rica is a promising country to do business in with high economic growth but it is not without its challenges.
FREE News Alerts
Sign Up for our free News Alerts - All the latest articles on your chosen topics condensed into a free bi-weekly email.
Register For News Alerts
Article Tags
Cayman Islands Employment and HR Contract of Employment Finance and Banking Financial Services
Insurance Insurance Laws and Products Strategy Economic Analysis
More Tags
Similar Articles
Powered by mondaq AI
MATCH
66%
Economic Overview (From the Minister of Financial and Economic Development) Cayman Finance
Related Articles
Pivot To Green – The Next Step For Private Capital Walkers
15/15 Regulatory Update - October Maples Group
Blocker Subsidiaries Are Back: Why This Simple Structure Is Used During Economic Downturn Intertrust
Investing In A New World - ESG Considerations For Settlors And Trustees Of Cayman Islands Trusts Carey Olsen
Bermuda Economic Substance E-Filing Portal Now Open Walkers
Mondaq Webinars
Securitisation in Luxembourg – A Vibrant Market with a Flexible Toolbox
GSK Stockmann SA
Webinar Luxembourg Luxembourg
Arbitration is Common and Civil
OBLIN Attorneys at Law LLP
Webinar Wien Austria
More Webinars
Comparative Guides
Alternative Investment Funds
FinTech
Restructuring & Insolvency
Trademarks
Mondaq Advice Centres
Global
Trademarks in SAARC Countries
Global
Investment Immigration
Offshore
Asset Management & Investment Funds
More MACs
Curated Content
A Framework For Examination Of Personal Devices Under The Turkish Competition Authority's New Guidelines – How It Converges With And Differs From The EU Practice
ELIG Gürkaynak Attorneys-at-Law
Digital Securities Business Is About To Bloom
Anderson Mori & Tomotsune
A Different Perspective To Employer`s Liability For Anti-Competitive Behaviors: Arçelik's Application For Leniency
ELIG Gürkaynak Attorneys-at-Law
Losing The Battle, Winning The War? – Ramifications Of The Newly Introduced Settlement Mechanism Under Turkish Competition Law
ELIG Gürkaynak Attorneys-at-Law
Upcoming Events
Mondaq Social Media