It has been a long and difficult stretch for Canadian oil and gas, with legal challenges, political decisions and takeaway capacity issues all serving to put pressure on an already stymied industry. A confluence of challenges—including, most prominently, persisting uncertainty around the Trans Mountain Pipeline—continue to negatively affect the sector in Canada. On the heels of the federal election, we must now wait to see whether further barriers will be created by the Liberals' minority government, notwithstanding the government's vow that the Trans Mountain Pipeline will be built. 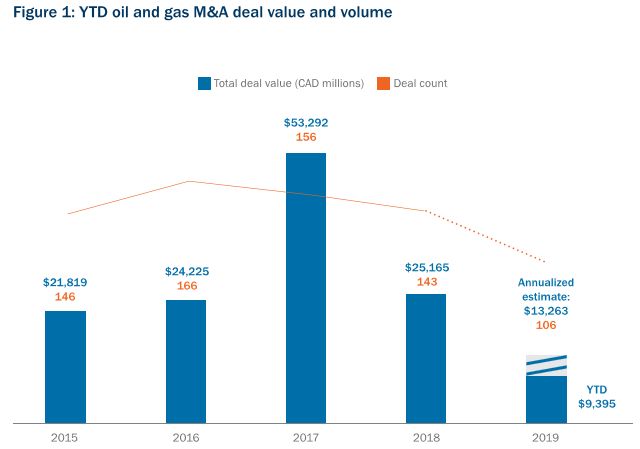 The government of Alberta mandated production curtailment from January 1 to December 31 2019, indicating that a lack of sufficient pipeline and rail takeaway capacity, as well as storage facilities being at near capacity, was costing the Canadian economy more than C$80M per day.1 The negative impact such lack of capacity has had on investment in Canada's oil and gas sector is undeniable. The Canadian Association of Petroleum Producers (CAPP) has forecasted that capital investment across Canada's oil and natural gas sector will have fallen by 54% in the last five years. 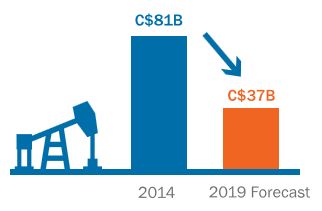 Canadian Association of Petroleum Producers forecast that capital investment across Canada's oil and natural gas sector will fall to C$37B in 2019.

This lack of capital and negative investor sentiment has negatively impacted stock prices of the oil and gas producers and service companies, some of which have recently been removed from the S&P/TSX Composite Index, resulting in certain funds being required to sell off shares.2

Very low stock prices may cause speculation around greater potential for hostile bids; however we have not seen any hostile activity since Husky Energy's C$2.8 billion proposed hostile takeover of MEG Energy, a bid which it ultimately elected not to extend (Husky cited curtailment and lack of progress on pipelines in Canada as the reason for its withdrawal). Some of the small to mid-size producers (such as Obsidian, Pengrowth, Strategic and Bellatrix) have announced strategic reviews and restructurings in 2019, but there is no certainty on the appetite of suitors in the current environment.

Midstream activity on the rise

Some areas of the sector are experiencing more activity than others: M&A activity for midstream assets, including pipeline and other midstream infrastructure, continues to be a focal point for investors. Institutional investors in particular are gravitating to midstream assets for their reliable cash flow and targeted rates of return. Recent examples include KKR's Q1 partnership with SemGroup Corp to create a new midstream platform in connection with the acquisition of Meritage Midstream from Riverstone Holdings,3 AIMCo's acquisition of an 85% equity stake in the Northern Courier Pipeline from TC Energy Corporation, and Northleaf Capital Partners' acquisition of CSV Midstream Solutions Corp., a Calgary-based midstream natural gas and liquids infrastructure company, from Apollo Global Management, LLC.

In the public M&A space, Pembina announced in Q3 its agreement to purchase Kinder Morgan Canada Inc.—the second stage of Kinder Morgan's exit from Canada following its sale of the Trans Mountain Pipeline to the Government of Canada in 2018. AltaGas Ltd., which targeted asset sales of up to C$2 billion for 2019, has announced deals exceeding that amount, most recently with the C$870 million disposition of its interest in the Central Penn Pipeline in the U.S. And earlier this month Husky Energy announced its sale of the Prince George Refinery in British Columbia to Tidewater Midstream and Infrastructure Ltd., including a five-year offtake agreement for 90% of the nameplate capacity on diesel and gasoline volumes produced at the facility.

Impact from regulators and courts

A number of regulatory and legal developments over the last several years have had direct and significant effects on the oil and gas sector, contributing to the overall uncertainty in the industry and downward pressure on investment, including a number of country exits by foreign companies. A few of these key developments are summarized below:

The federal Liberal government introduced Bill C-69 to overhaul how major infrastructure projects, including interprovincial pipelines, are reviewed and approved in Canada. An amended version of Bill C-69 cleared the final hurdle to becoming law and received royal assent in June and was proclaimed into law in August. Concerns around Bill C-69 include that it will make the regulatory and environmental review process more onerous, raise the risk of litigation and generally have a chilling effect on foreign investment to Canada. The government of Alberta recently launched a constitutional challenge against Bill C-69 in the Alberta Court of Appeal. In "Getting projects built under Canada's new impact assessment regime", we discuss how proponents can navigate the new environmental assessment regime.

This bill (dubbed the Oil Tanker Moratorium Act) was introduced by the federal Liberal government in 2017 and also received royal assent in June. This bill seeks to protect a portion of BC's northern coast and is expected to impair the ability to export crude oil to global markets.

In May, the BC Court of Appeal unanimously ruled against the BC government's proposed regulations which would require a hazardous substance permit be obtained to transport any increased amount of heavy oil through BC.4 This was a further action by the BC government to stymie the Trans Mountain Pipeline, and the BC government has indicated its intent to appeal the decision to the Supreme Court of Canada.

The Supreme Court's decision in the Redwater insolvency case has had the effect of increased uncertainty around license transfers with the Alberta Energy Regulator as well as a negative impact on debt facilities and issuers' ability to raise capital.5 The AER has been criticized for its management of the regulatory framework in Alberta and the board of the AER was recently replaced by the UCP government.

Carbon legislation remains a political and regulatory issue in Canada. In June, Alberta's newly elected UCP government repealed the provincial carbon tax previously adopted by the NDP government. This means that Alberta may be subject to the federal carbon tax, similar to other provinces that have not adopted their own carbon pricing regime.

In mid-June, the federal government re-approved the Trans Mountain Pipeline. Trans Mountain has stated that construction will commence this fall. The latest decisions around the pipeline have been considered wins for the project moving ahead. In September, the Federal Court of Appeal permitted only half of the legal challenges to proceed, allowing expedited court proceedings on the quality of the Indigenous consultation with certain groups and dismissing the claims based on environmental concerns. This case illustrates the significant challenges for companies satisfying consultation rights in the context of a linear project extending over a thousand kilometres and impacting numerous communities and stakeholders in contrast to localized projects where consultation involves a finite set of communities and stakeholders.

Years of pressure have taken their toll on Canada's oil and gas industry. It will take time for investors to rebuild their confidence in the Canadian regulatory and political climate such that we see capital spend flowing to the sector, and there is no imminent improvement expected following the recent federal election. Industry and the government of Alberta have reacted to these concerns by launching public relations campaigns intended to educate the public regarding the strong safety and environmental stewardship supported by the industry in Canada and the critical impact of the oil and gas sector to the Canadian economy. The hope is that some middle ground will be achieved on these highly political and polarizing issues to promote investment and allow development of our country's resources in an environmentally and fiscally responsible manner. The federal government has maintained its commitment to build the Trans Mountain Pipeline and potential relief may lie ahead with the pipeline's re-approval, and if outstanding approvals are granted to the Line 3 Replacement Project or Keystone XL. With more certainty around pipeline access for Canadian oil and gas on the horizon, the sector may at last have renewed cause for optimism.