In the last several years, the growth of Canada's tech sector has been on a path of acceleration. The tech sector's presence, once concentrated in key research and commercial centres, is now being felt across the country. Alberta is experiencing particular growth, attracting tech startups, leaders and emerging companies. In this article we explore the drivers of Alberta's tech sector momentum.

We are seeing growth across a variety of industries in Alberta, including agriculture, health, and renewables. The technology sector in particular has taken centre stage as a vital aspect of Alberta's industry diversification, driving investment to the province while it attracts an increasing number of tech startups, established leaders in the sector, and other emerging companies. What is driving the tech boom in Western Canada-and what does it mean for the economic mix of the region?

Despite the widespread disruption of the pandemic, 2020 was a banner year for VC investment in Alberta, breaking records and bringing to the province almost 10% of Canada's total venture capital investment (Figure 1). 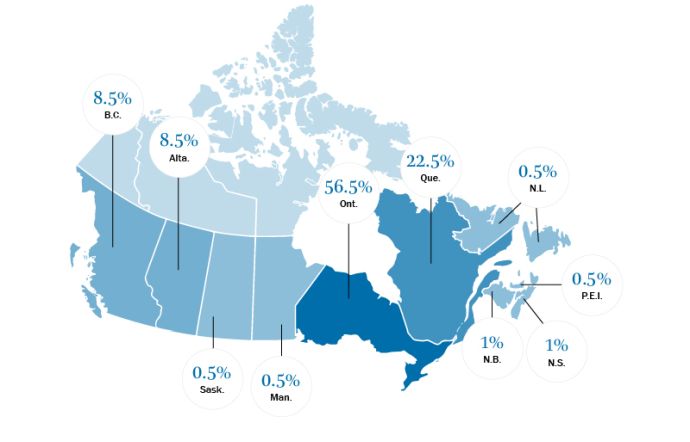 With over 3,000 tech companies currently based in the province, compared to just over 1,200 in 20181, there are a number of reasons (affordable commercial and residential real estate, attractive lifestyle and competitive corporate tax rates aside) why Alberta is becoming an increasingly appealing place for tech companies to set up shop.

The first is talent. Alberta has long been a global energy leader and developer of industry technology initiatives which has provided a natural springboard for the technology industry in Alberta to transcend oil and gas. The province's well-educated and highly specialized work force is a key part of the ecosystem for tech companies to launch, grow and thrive as they develop new opportunities in data management, fintech, health and life sciences, and AI solutions, as well as "green" solutions to environmental and social governance (ESG) challenges in the energy sector. Earlier this year, Brian de Lottinville, Founder of Benevity, a successful Calgary-based tech company, said that what's happening in the tech boom springs from the same roots that drove Alberta's historical success in the energy sector: "an entrepreneurial spirit and not being afraid to take risks". By way of example, between 2020 and 2021, Alberta has set new records for venture capital investment in technology companies, led by blockbuster fundraises from companies such as Edmonton-based software company Jobber ($76M fundraise in 2020), Calgary-based digital engagement platform Symend ($73M fundraise in 2020)2, and Calgary-based fintech company Neo Financial ($114M in fundraises in 2020 and 2021)3.

Canadian entrepreneur (and star of CBC's Dragon's Den) Arlene Dickinson has based her venture capital fund District Ventures, as well as the District Ventures accelerator Venturepark Labs, in Calgary. Arlene spoke at a webinar and discussed the current state of talent capital in Alberta's business community:

Alberta is full of a younger, highly educated, certainly more socially conscious group of individuals than we're sometimes given credit for. Younger professionals are thinking hard about what they can do in the province to help. You see it in hospitality, tourism, agriculture and health. We sometimes get lost in the discussion around energy when underneath the surface there is so much more going on.The energy sector will always be important in Alberta but the question is what else could we be doing? It's not an either-or, it's a this-and.

Indeed, energy is not the only industry benefitting from the increase in innovative technology companies. Media, professional services, agriculture and health are some of the largest employers in the country, and Alberta startups creating technologies to interface with and serve these industries are benefitting from the enormous amount of existing innovation expertise in the province (Figure 2).

Figure 2: Number of identified companies by year and industry classification

Another reason why Alberta is becoming an increasingly appealing place for tech companies to establish themselves is the growing demand for technology to address ESG factors in the energy sector. The oil and gas industry is playing a significant role in progressing the technology mandate in Alberta. The increased focus on ESG issues is changing the narrative in energy production, and this shift is inviting a redirection toward new technology. Alberta's energy industry has been breaking ground in this area: the province's oil sands companies are global leaders in research and development spending on a per barrel basis, having invested over $1 billion every year since 2012 (read more about how the oil and gas industry, and in particular Canada's oil and gas industry, is leading the world in its approach to ESG here). Recently, Canada's five largest oilsands companies-comprised of Canadian Natural Resources Ltd., Suncor Energy Inc., Cenovus Energy Inc., Imperial Oil Ltd. and MEG Energy Corp-announced the Oil Sands Pathways to Net Zero Initiative and detailed plans to reduce GHG emissions with the objective of achieving net zero emissions from oil sands operations by 2050 using a number of technology driven solutions including established and proven technologies (such as carbon capture, use and storage), existing and emerging technologies (such as using clean hydrogen and electricity to power operations, and implementing solutions to advance production processes and improving energy efficiencies), and accelerating the development of new emission-reducing technologies4.

As more convergences between energy and technology are found and built upon, we will continue to see tech companies approach the industry in Alberta to take that training, investment and expertise and expand them into new industries and applications.

Beyond the energy sector, the ESG focus across all industries is creating opportunities for new ideas and approaches. The impact of the ESG conversation is a point of particular focus for tech companies in the province, with 39% of Alberta-based tech companies focusing on environmental challenges, 45% on social challenges and 18% on governance issues. And diversity, another top ESG priority, is also seeing advances in the province's startup community, with 30% of tech startups in Alberta having female founders-well ahead of the 20% global average5.

There's good reason for an optimistic outlook in the long term for the technology sector in Alberta. Not only is there a rising influx of new companies to the province, but they are also thriving once they get here: nearly 40% of startups now report greater than $1 million in annual revenue-that is a 66% increase from 20186. Other signs of an evolving ecosystem include further alignment of Canadian tech firms' M&A and venture capital investment to Silicon Valley/U.S. deal terms-an indication that U.S. influence and investment is on the rise (read our full report on venture capital dealmaking in Canada here).

It will be interesting to see not only how the ongoing Alberta tech boom will help cultivate Canada's presence as a strong tech player globally, but how it continues to breathe new life and innovation into the province's more established industries.