by Cheryl V. Reicin and Jordan Wright
Torys LLP
Your LinkedIn Connections
with the authors

From drug discovery to diagnostics and biotech, the Canadian life sciences industry is becoming increasingly versatile and dynamic. Perhaps these attributes explain the significant expansion the sector has experienced over the last few years, with the pandemic serving as an additional significant catalyst for growth. Investor and consumer interest in the industry continues to rise, and all indications are that the positive momentum in the industry is likely to continue. 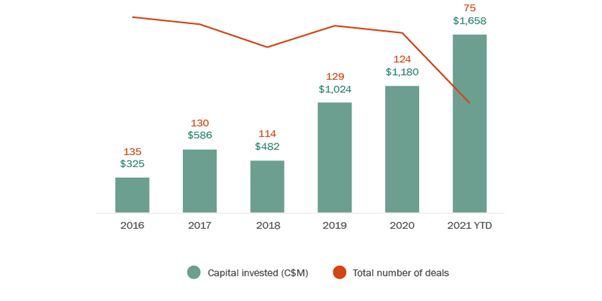 This is significant, because historically, Canadian companies in the sector have attracted capital that trickled in on an as needed basis which handcuffed the companies in many ways. With larger funding rounds in 2021, these companies have a greater chance of success and to compete effectively with their US counterparts. 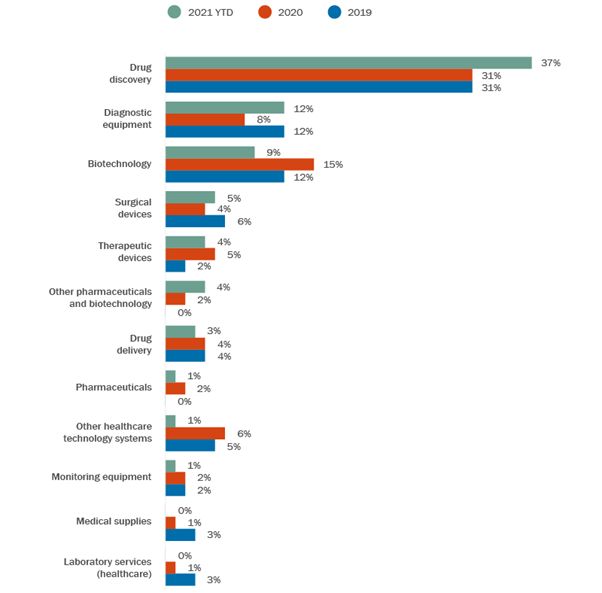 A new wave of government support

The pandemic has served as a turning point for life sciences around the world, spurring not just short-term focus on the sector to push through the crisis, but also a growing focus on the importance of and opportunity inherent building a robust life sciences industry.

The Canadian government's Strategic Innovation Fund will provide up to $792 million to support, among other things, research and development, clinical trials and the manufacturing of vaccines. Moreover, the Government of Canada's Budget for 2021 proposed to invest over $3 billion toward Canadian researchers and science, which includes the support of cutting-edge life sciences research and biotechnology1. The Canada Biomedical Research Fund also intends to invest $250 million over four years starting in 2022-2023 and the Biosciences Research Infrastructure Fund has pledged to invest $500 million over four years starting in 2021-20222. This is all in addition to the approximately $3 billion provided annually to Canadian companies through the Scientific Research and Development tax incentive program3.

This financial support, together with the signs of improved venture capital funding and increased health-conscious consumerism and the expectations, needs and desires for health innovation for Canada's aging population, will likely pave the way for further momentum in the Canadian life sciences industry.

The growth of U.S. investment in Canadian life sciences companies—which at $754 million in 2021 through mid-September 2021, has already surpassed the amount of U.S. capital invested in all of 2020 (Figure 5)—can be attributed, at least in part, to the heightened competition for life sciences targets in Silicon Valley and Boston and high deal valuations, all of which are encouraging U.S. investors to seek diversified investment opportunities in Canada. In particular, Toronto has become a market of choice in the last few years and it is viewed as an important life science cluster, behind Boston, San Francisco/Silicon Valley and San Diego but growing at faster rate. 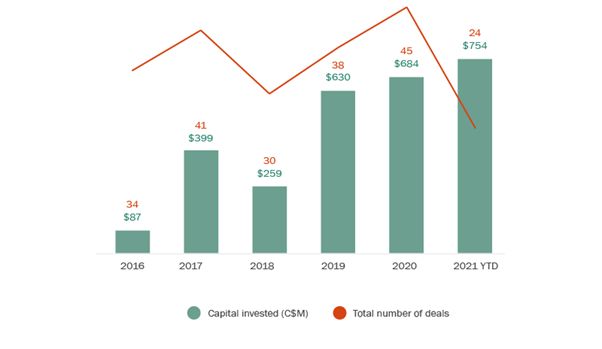 So far this year, the province of Ontario has attracted in excess of $1 Billion in venture capital investment from investors, with British Columbia and Québec representing the second and third destinations of choice for VC investors, as exemplified by Figure 6 below.

Of the 75 venture capital deals completed in life sciences through Q3 2021, a combined 60 were done in British Columbia, Ontario and Québec4.

With money coming in from Canadian venture capitalists, as well as from American and other foreign investors, combined with government funding and incentives, the Canadian life science sector is becoming increasingly robust. Canadian scientific innovation has been world class and now with the increased access to capital, Canada is well poised to attract the top talent in the industry to lead its companies and bring cutting edge products to market.