In the past two years, reverse vesting orders ("RVOs") have gone from obscurity to being the tool of choice in many complex restructurings under the Companies' Creditors Arrangement Act (the "CCAA"). As restructuring practitioners increasingly employ RVOs, it begs the question: Will RVOs replace traditional CCAA plans?

In a traditional corporate restructuring under the CCAA, debtor companies typically follow one of two paths:

RVOs have emerged as a new third option for debtor companies. RVOs combine the benefits of both a plan and an AVO, but without imposing the same costs, time considerations and requirements of a plan or the limitations of an AVO.

What is an RVO?

An RVO is a court order that transfers unwanted assets and liabilities out of a debtor company ("ExistingCo") to an affiliated (often, newly incorporated) company ("ResidualCo"). ExistingCo is left holding only the assets and liabilities that the purchaser wants to acquire. The purchaser can then acquire the shares of ExistingCo, and ExistingCo can exit CCAA proceedings. ResidualCo remains in the CCAA proceeding after ExistingCo exits, at which point ResidualCo typically makes an assignment in bankruptcy. 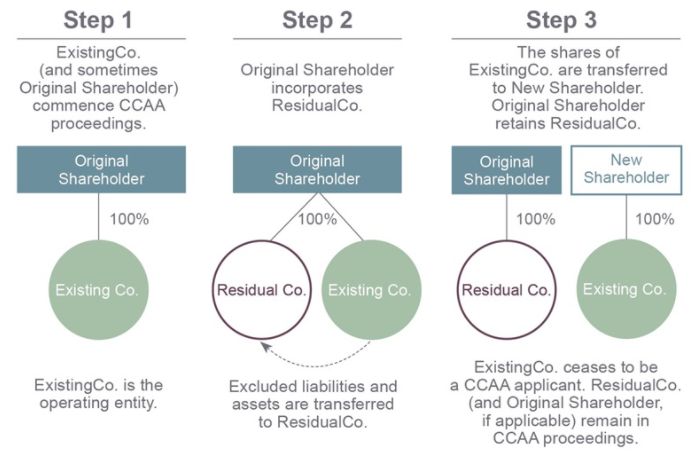 Why Use an RVO?

RVOs have many desirable characteristics, including the following:

It is likely that as RVOs expand in usage, more advantages and use-cases will emerge.

When Have RVOs Been Used?

Almost all RVOs have been employed where the debtor company had assets that could not (or could not easily) be transferred to a purchaser as part of an AVO. These assets have included cannabis licences, mining licences or permits, and favourable tax attributes. Another common feature of RVO transactions is that the RVO transaction is typically the only option available to the debtor company, other than bankruptcy (e.g. there is only one prospective purchaser following a sales process, and that purchaser insists on an RVO).

RVO transactions can be quicker, cheaper, and easier to implement than CCAA plans. Given these benefits, it is not surprising that RVO transactions have already started replacing traditional plans.

In Quest University Canada (Re),7 the debtor originally anticipated using a plan to sell its assets. One creditor, who effectively had a veto right, opposed the asset sale and was unlikely to vote in favour of the plan. The debtor, in turn, reformulated the sale as an RVO transaction. By using an RVO instead of a plan, the debtor could still transfer certain hard-to-transfer assets (like its university degree-granting authority) while simultaneously reducing opportunities for the opposing creditor to object. Justice Fitzpatrick of the Supreme Court of British Columbia granted the RVO, stating that "[t]here is no provision in the CCAA that prohibits an RVO structure",8 and stressing that there were "unique and exceptional circumstances"9 in this case that warranted an RVO, such as the non-transferability of certain assets and the lack of attractive alternatives. The Court of Appeal for British Columbia dismissed an application for leave to appeal by the creditor.10

The debtors in both Beleave Inc. et al. (Re) and Green Relief Inc. (Re) also replaced anticipated plans with RVO transactions. In Beleave Inc. et al. (Re), the debtors switched to an RVO transaction because their illiquidity meant that they could not fund the procedural steps required to implement a plan.11 In Green Relief Inc. (Re), the debtor switched to an RVO to, among other things, reduce its use of interim financing, minimize professional fees, and save time.12 Both cases involved the transfer of cannabis licences.

Whether there are any limitations on when RVOs can be employed (and when they can replace traditional plans) has yet to be explored in-depth by any level of court. Most RVO cases share similar facts: Nemaska Lithium Inc. (Re), Quest University Canada (Re), Beleave Inc. et al. (Re) and Green Relief Inc. (Re), for example, all involved hard-to-transfer assets and no attractive alternatives to an RVO. This makes it unclear whether RVOs can be employed in different circumstances, such as those more common to simple CCAA plans.

TakeawayThe growth of RVO transactions in the last two years exemplifies the ongoing ability of the CCAA and the courts to accommodate new and innovative transactions. In the coming years, it is likely that RVOs will continue to expand and possibly be used in novel circumstances. Close attention should be paid to whether this expansion results in a corresponding reduction in the number of traditional CCAA plans and the creation of limitations or conditions on when RVOs can be employed.