Canada: Retrograde In Taurus: Ninth Circuit Upholds Judgment That Stairway To Heaven Did Not Infringe Taurus

In the highly-anticipated decision of Skidmore v. Led Zeppelin, the United States Court of Appeals for the Ninth Circuit upheld a jury decision that Led Zeppelin's Stairway to Heaven did not infringe Spirit's Taurus. Absent the United States Supreme Court granting leave to appeal the decision, the decision likely concludes the copyright saga that started in 2014, leading to a jury verdict in 2016 that the Ninth Circuit sent back to trial in 2018.

Randy California, the guitarist for the band Spirit, wrote the song Taurus some time in 1966 or 1967. In 1967, Randy California's publisher registered the copyright in Taurus by submitting a single page of sheet music with the United States Copyright Office. At the time Spirit published its recording of Taurus, sound recordings were not subject to copyright in the United States. Therefore, only the single page of sheet music that was filed with the Copyright Office could be used to establish copyright under the 1909 Copyright Act.

Ninth Circuit's Analysis of Taurus and Stairway to Heaven

Listeners may pick up many similarities between Taurus and Stairway to Heaven by listening to recordings, but the recording of Taurus is not protected by copyright (since sound recordings did not have protection at the time). Instead, only the underlying composition that was submitted to the United States Copyright Office could be enforced. Many of the embellishments and stylistic elements in the Taurus recording could not be considered in the infringement analysis.

The suit revolved around four bars of Taurus and Stairway to Heaven. The Plaintiff's theory of infringement was based around five similar elements: a minor chromatic line and associated chords; duration of pitches of the minor chromatic line; the arpeggio melody line; the steady eighth note rhythm; and the "pitch collection" (i.e. the same proportion of the same notes). However, the actual written melodies and rhythms of the opening passage of both songs are otherwise very distinct. 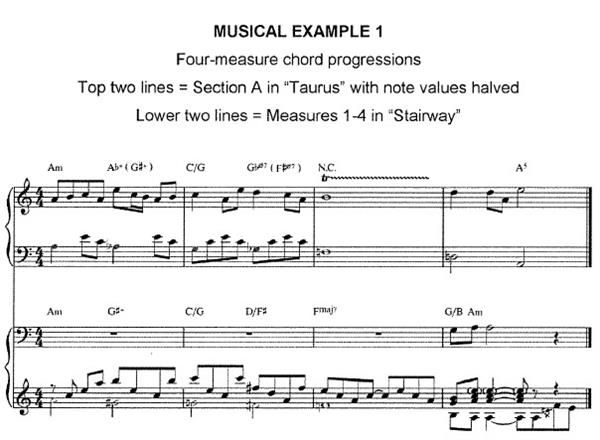 Since "independent creation" is a defence to copyright infringement, the Plaintiff had to show that Led Zeppelin copied Taurus. There was no direct evidence of copying, but copying may be inferred with circumstantial evidence of "access" and "substantial similarity". Although there was inconsistent case law on whether the "inverse ratio rule" applied (i.e. increased access would require less substantial similarity), the majority held in the decision that this rule is inconsistent with copyright law and should no longer be considered good law.

The majority endorsed that "common musical elements," including "descending chromatic scales, arpeggios or short sequences of three notes" are not protectable by copyright. These are "non-protectable musical building blocks" that do not belong to any musician. Further, copyright is limited to the original part of a work, not what has been copied from other works or the public domain.

In other words, Taurus is not a monopoly on a descending chromatic line, an arpeggio line or a chord progression. In order for there to be infringement, Stairway to Heaven must take what is actually original, which is how the non-protectable musical building blocks are put together. The case for "substantial similarity" between Taurus and Stairway to Heaven becomes very difficult once the Court requires more than the same common musical elements.

The leading case on non-literal copyright infringement in Canada is Cinar Corporation v. Robinson, 2013 SCC 73. The Supreme Court of Canada held that such an infringement analysis should not exclude non-protectable elements.1 Instead, the analysis should be holistic and consider the work as expressed and its particular combination of "elements that represent a substantial part of the skill and judgment."2 The analysis should give little weight to generic similarities and instead focus on distinctive elements.3

Under a Canadian legal analysis, Stairway to Heaven would likely not be considered an infringement of the score of Taurus. A holistic analysis that focuses on the distinctive elements of Taurus would be drawn to how the melody is used in the context of the chord progression. The descending chromatic line and arpeggio line—the most prominent similarities—would have little weight as they are generic elements.

The importance of listening to the recordings cannot be understated. As Denault J. held regarding the "hearing test":

"Certainly it is a subjective test, but it is the one that must ultimately be used in such a matter ... to determine the similarity of works after expert evidence has established an objective resemblance. Writing imposes natural limits on the reproduction of what is perceived on hearing a musical work; it is not possible to accurately reproduce by words the impression made on the ear by hearing alternately the first measures of the refrain of these two works: it is striking."5

The clarifications of American copyright law in the decision come at the expense of inconsistencies with past decisions. The Court did away with the "inverse ratio rule" in the Stairway to Heaven decision that it previously cited in the Blurred Lines decision, which found infringement.6 Whereas the Court gave little weight to Jimmy Page's ownership of the Spirit album containing Taurus, the United States District Court for the Southern District of New York easily inferred that George Harrison "subconsciously" copied He's So Fine in writing My Sweet Lord simply by being "aware" of it.7

Considering the long term of copyright (life of the author plus seventy years in the United States), the Stairway to Heaven case will probably not be the last to be argued on the basis of sheet music rather than a recording. Copyright owners in such cases will need to find creative ways to put the impression of hearing the similar recordings into words.

It's a long climb to the Supreme Court of the United states, but maybe they will get what they came for (eventually).