Local Content ("LC") could have broader meaning depending on the context and jurisdiction. LC norms can be applied using the concepts of territoriality or nationality depending on the policy adopted by each country. In Brazil, LC is the value added in the Brazilian territory for the production of a good and service, following the guideline of the National Organization of the Petroleum Industry (ONIP, 2010). LC basically refers to the Brazilian based inputs for the supply of goods and services necessary for the exploration and production of oil and gas in Brazil. Using the territoriality criteria, LC can be locally produced by either national or international capital owned companies, provided they use Brazilian inputs, including infrastructure and labor. The reason for the choice of the territoriality criteria by the Brazilian authorities is the fact that it fosters generation of value in Brazil1 . It was understood that using the nationality criteria, however, would limit the supply only by national owned companies and, therefore, the investments and wealth creation in the country.

LC obligations traditionally have either a legal or contractual nature. LC obligations established by law one could argue that would create an environment with a more solid legal certainty for E&P companies, however, the other could argue that a possible amendment to such legislation for any improvements based on lessons-learned would have to observe the applicable legislative procedure, which is never an easy task. On the other hand, LC obligations set forth in E&P contracts can be set during the bidding round and later easily adjusted to accurately reflect the economic scenario of the industry from time to time.

For this reason, there is no standard LC policy ("LCP"), as well as no single LC tool that works for all countries under all circumstances (TORDO et al., 2013). However, a successful LCP can be considered one that not only generates value for the country, but also stimulates others sectors of the economy, boosting the country's economic activity. In view of this, the LCP should foster the creation of an industrial and service provision sectors capable of competing internationally, and not only in the creation of a market reserve for local producers. Therefore, the LCP must enable a competitive and sustainable business environment, capable of operating not only nationally, but globally, aiming to create leading positions in the use of key technologies (ARAÚJO et al., 2012).

The enactment of Law No. 9,478/1997 (Petroleum Law) removed Petrobras' monopoly in the oil and gas exploration and production sector and enabled the entry of new agents in the Brazilian market. As a consequence, the market became heated and the demand arose in Brazil for the supply of goods and services in the oil and gas chain, which needed to be imported from countries with more experience operating in the sector.

Given this scenario, it was deemed necessary to adopt LC clauses in the first concession contracts signed in Round Zero promoted by Brazil's National Agency of Petroleum, Natural Gas and Biofuels ("ANP"). The LC clauses provided for a portion of the mandatory contracting of locally based suppliers by companies in the execution of exploration and production contracts of oil and natural gas ("E&P Contracts"), in order to promote the domestic industry and services providers and expand local supply capacity.

Ever since the 1st Bid Round under the concession regime, LC obligations have been encompassed in E&P Contracts in Brazil, as they were originally one of the bidding criteria. At the beginning of 2017, the Federal Government started to implement several regulatory changes in the petroleum industry, including the removal of LC from the applicable bid criteria2. 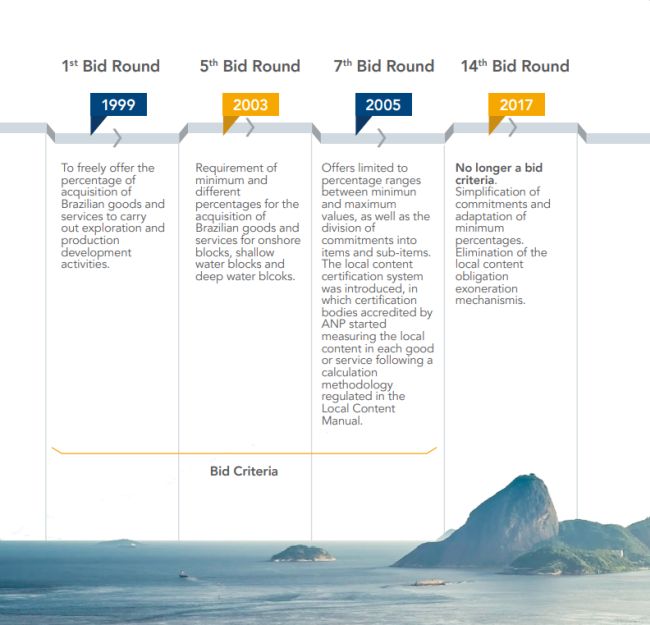