by Margot King
Piper Alderman
Your LinkedIn Connections
with the authors

The New South Wales Government has finalised the draft declaration of the New England Renewable Energy Zone (Draft Declaration) and it is now on public exhibition for feedback until 12 November. The Draft Declaration is the first step in formalising the New England Renewable Energy Zone under s19 of the Electricity Infrastructure Investment Act 2020 (NSW) (the Act).

The Renewable Energy Zone (REZ) strategy is part of the NSW Government's Electricity Infrastructure Roadmap. The aim is to encourage a cluster of renewable generators in an area, and in doing so, to capitalise on economies of scale for the development of network infrastructure. 'Long-Term Energy Service Agreements' (LTES Agreements) will encourage investment by giving long term revenue certainty and minimum pricing through derivative arrangements.

The indicative location of the New England REZ was first published in 2018 and since then, there has been high levels of real property transaction activity in the area. Energy Corporation (Energy Co NSW) has now refined the area after an extensive collaboration and consultation process. Once gazetted, the specified geographical area and the specified network infrastructure will comprise the New England REZ, although infrastructure may be added to the declaration at a later date.

The Draft Declaration declares (in draft form) a REZ comprising:

Schedule 1 to the Draft Declaration is a map identifying the New England REZ Geographical Area - extracted below. 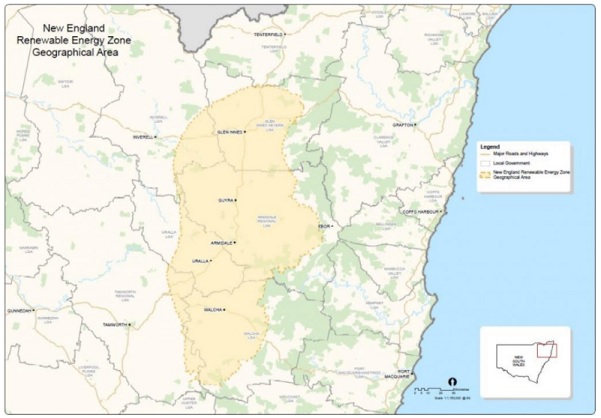 Next steps under the Act

Once the declaration is gazetted, the next steps under the Act include the following.

Generation infrastructure in the REZ is preferenced through s48 - the Consumer Trustee must not recommend entry into an LTES that is outside the REZ unless it shows 'outstanding merit'.

The draft declaration is open for public feedback to EnergyCo NSW's REZ team until 12 November 2021. Further information is available here.

Formalising the New England REZ will be a welcome step for the many project proponents that are already active in the area as well as landholders entering into contracts for sale of land, leases and options for sales and leases with them.

The objects of the Act include a wide range of economic, environmental, social and energy security goals and these objects are given practical effect through measures such as the LTES tendering and negotiation process. Careful implementation will be needed to ensure local Aboriginal communities and others in the community do share in the benefits that the REZ promises. The REZ strategy is shaping up to be an important driver of carbon emissions reductions, regional investment and economic transition in New South Wales.

ARTICLE TAGS
Australia Energy and Natural Resources Oil, Gas & Electricity Renewables
POPULAR ARTICLES ON: Energy and Natural Resources from Australia
Challenges ahead as Victoria caps thermal energy from waste
Corrs Chambers Westgarth
Thermal waste to energy facility operators will need a cap licence to recover energy from permitted waste.
Understanding water regulation In Queensland and NSW
McCullough Robertson
This is the first of a series on Understanding Water Regulation, focusing on the complex water regimes across Qld and NSW.
Shale gas handbook for Australia
Norton Rose Fulbright Australia
The shale gas industry in Australia is very much in its infancy and the full extent is still far from being identified.
WA Mineral Royalty Rate Analysis – A Quick Guide
HopgoodGanim
This Quick Guide is an overview of the Review's findings and recommendations and the current WA mineral royalty regime.
Stamp Duty Implications Of Assignments Of Royalties In Western Australia
Norton Rose Fulbright Australia
With the introduction of the Duties Act 2008 (Duties Act) to replace the Stamp Act 1921 (Stamp Act) in Western Australia, there has arguably been a change in the duty treatment of a transfer of a right to receive income under a royalty agreement.
Understanding Overlaps - Mining Tenure vs. The Rest Of The World
HopgoodGanim
It is a common misconception that the grant of mining tenure, whether it be an Exploration Permit, Mineral Development Licence or Mining Lease, will entitle the holder to access all land within it in order to explore or mine.
FREE News Alerts
Sign Up for our free News Alerts - All the latest articles on your chosen topics condensed into a free bi-weekly email.
Register For News Alerts
Article Tags
Australia Energy and Natural Resources Oil, Gas & Electricity Renewables
Related Articles
Queensland releases new exploration acreage for petroleum and gas and greenhouse gas storage Cooper Grace Ward
Challenges ahead as Victoria caps thermal energy from waste Corrs Chambers Westgarth
Update: Environment and Communications Legislation Committee recommendation a step forward for offshore renewable energy Holding Redlich
Australia Introduces The Offshore Electricity Infrastructure Bill 2021 Jones Day
NSW to tighten rules on regional electricity generation projects Corrs Chambers Westgarth
Mondaq Webinars
What Can Be Achieved in Luxembourg in Terms of Securing Assets in Pre-Trial, Pre-Enforcement Situations?
Bonn Steichen & Partners
Webinar Luxembourg Luxembourg
Hot Topics in Fund Finance [REPLAY]
Cadwalader, Wickersham & Taft LLP
Webinar New York United States
More Webinars
Comparative Guides
Alternative Investment Funds
Anti-Corruption & Bribery
Data Privacy
Environment and Climate Regulation
Insurance
More Guides
Mondaq Advice Centres
Global
Trademarks in SAARC Countries
More MACs