Australia: The NSW landmark Modern Slavery Act and what it means for NSW government bodies and local councils

In the last complete year of records, the Australian Federal Police received 224 reports of human trafficking, slavery and slavery-like offences. One of those reports led to the arrest of the owners of the Cake Merchant, a chain of cake stores in Western Sydney.

The owners have been accused of making an employee work excessive hours without pay, confiscating their passport, using threats of deportation and monitoring overseas phone calls with friends and family. They have been charged with multiple modern slavery offences.

With recent amendments to the Modern Slavery Act 2018 (NSW) (Act), which came into effect on 1 January 2022, NSW government bodies, local councils and state owned corporations will now be obliged to undertake a review of their supply chains and undertake a form of modern slavery reporting.

Thanks to their extensive supply chains, these entities can play an important role in the fight against modern slavery. The Act requires NSW government bodies, councils and state owned corporations to take reasonable steps to ensure the goods and services they buy are not the product of modern slavery, and to report on how they do this.

What are the obligations of NSW government bodies and local councils?

NSW government bodies and local councils are not obliged to prepare an MSS in accordance with the Commonwealth Act or file it on the federal Modern Slavery Statement Register. However, if these entities choose to do so they will meet the requirements of the Act.

To facilitate disclosure and transparency, the Act also provides protection from criminal and civil liability if information is disclosed in good faith to the Anti-Slavery Commissioner, which may otherwise be subject to disclosure restrictions, for example, confidentiality obligations.

What are the obligations of state owned corporations?

In addition, a state owned corporation will be required to display a copy of its MSS on a publicly accessible website kept by the corporation and provide the Anti-Slavery Commissioner written notice that the statement has been published.

With the Act comes the establishment of Australia's first Anti-Slavery Commissioner, an independent office with broad oversight of government agencies and local councils. 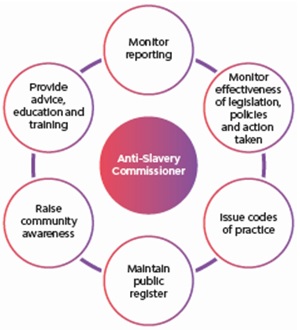 The Commissioner will also monitor the effectiveness of legislation, governmental policies and action taken to combat modern slavery, issue codes of practice and maintain a public register of government bodies, local councils and state owned corporations that do not comply.

Other roles include recommendations, information, advice, education and training about ways to prevent modern slavery.

A publicly available register will be maintained by the Anti-Slavery Commissioner to identify any government bodies, local council and state owned corporation that has failed to:

Failure to publish a Modern Slavery Report is not currently punishable under the Act. However, this may change. That said, the Crimes Act 1900 (NSW), Human Tissue Act 1983 (NSW) and the Criminal Code Act 1995 (Cth) do carry penalties for modern slavery offences.

Preparing for the reporting period

If you are a government body, local council or state owned corporation that requires assistance in preparing for the reporting requirements under NSW's modern slavery law, please get in touch with us to discuss how we can help you meet your obligations under the Act. We have advised clients on their obligations to report under the Commonwealth Act, assisted with due diligence processes to determine modern slavery issues and responses and prepared MSS's for lodgement on the Modern Slavery Statements Register.