by Colleen Bray
Generics Web
To print this article, all you need is to be registered or login on Mondaq.com. 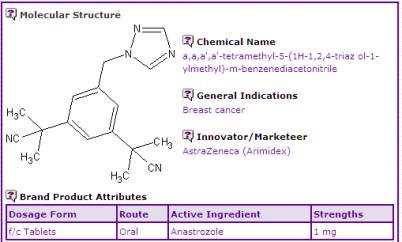 The Key Patent Indicator (KPI, Table 2) identifies two patent families of significant interest for companies interested in developing an Arimidex equivalent. The first patent family identified claims the Anastrozole active ingredient per se and preparation thereof. The expiration of the US equivalent in the family has resulted in many generic competitors entering the US market, each taking the opportunity to secure their share of the Anastrozole market.

The Anastrozole Regulatory Data has identified that there are several proactive generic competitors holding marketing authorisations in Australia and the UK, waiting to market a generic product upon expiration of the extensions.

In Australia, the equivalent patent has been extended until December 2011.

The term of the European equivalent has been extended via SPC in most member states with the exception of an SPC application based on the Spanish member, which was rejected. In addition, the SPCs in many member states have been extended by a "paediatric extension" in accordance with article 36(1) of (EC) No. 1901/2006, which allows a 6 month extension to a SPC where appropriate studies have been conducted in accordance with an agreed paediatric investigation plan. This gives AstraZeneca a further 6 months' product monopoly in these member states causing delay in the launch of a generic equivalent until February 2011. The grant of paediatric extensions may have posed a problem to generic competitors who are unaware of this recent update to the legislation and who had planned to launch their product in August 2010 in line with the original expiration of the SPC. The timing of the SPC applications 6 months prior to SPC expiry combined with the national patent offices' confusion over how to process and publish the fact that much confusion occurred.

Even though there is a lack of a patent extension scheme in Canada, the Canadian equivalent expires in October 2012 – well after patent protection in other major markets has expired. This is due to the patent term being calculated as17 years from the grant of the patent for older applications, as opposed to the more conventional 20 years from application date.

The Litigation Alert icon next to CA1337420 ('420) reveals that in September 2009 AstraZeneca, in response to Mylan filing a Notice of Allegation for reference drug Arimidex, filed an application with the Federal Court of Canada seeking to disallow the issuance of a Notice of Compliance to Mylan until the expiration of '420. Mylan claimed '420 is invalid or its product would not infringe this patent. The outcome of the case is still pending at time of publication of this article.

The second patent family identified by the KPI claims the use of Anastrozole for reducing the rate of recurrence of cancer and of a new contralateral primary tumour in postmenopausal women with early breast cancer. These claims appear to protect at least the indications relating to use of Anastrozole as an adjuvant treatment of breast cancer. The equivalent patent in Australia has been granted and expires 6th December 2022. Patent applications are pending in Canada and the US and the grant of these patents may lead to the launch of products with carved out indications.

In Europe, AstraZeneca filed a divisional patent application EP1997492 (published in December 2008) shortly after observations were filed by a third party in June 2008 for the parent patent application EP1455781. The divisional was filed with the same claims as the parent application. The filing of observations was a strong indicator that at least one third party may have been watching the progress of the application, and unsurprisingly the granted patent has now been opposed by opposed by Hexal, AET, Stada, Helm and Teva. A date for oral proceedings has not been set, but the uncertainty of the outcome of this process, combined with the length of opposition and appeal procedures before the EPO will keep generic companies guessing for a long time as to when their products will be able to carry the full set of indications carried by Arimidex. This obviously raises the question of the merit of filing late third party observations to a European patent. In this case the filing of the divisional patent has started a new examination process which will prolong the outcome for the patent application. In April this year the EPO amended legislation (Rule 36(1) EPC) to limit the time of when a divisional patent can be filed to 24 month from the first communication of the examination procedure. This was to increase the legal certainty of patents and possibly prevent the misuse of the system by patent applicants1.

Study of the Patent Risk Analysis graphs, based on information contained in the corresponding Pipeline Developer report, reveals a large amount of patent filing activity for Anastrozole. Use and formulation patents contribute a majority of the patents filed (Figure 1). This could be attributed to a large amount of generic interest in developing a generic equivalent. As Anastrozole is an anticancer drug it is unsurprising to observe that over a quarter of patent filed relate to an assay method. These types of patents relate to diagnosis of the type a cancer thereby identifying the type of drug that will be effective as well as a subsequent dosing regime. As there are many different aspects to a drug product and administration thereof, it important to have a comprehensive source of patent information which contains all relevant patents for a particular marketed drug, so as to avoid infringing patents which may not be identified by submission of data to regulatory bodies for the marketed drug. 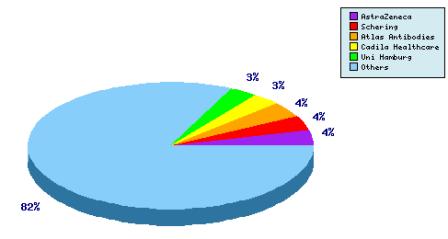 The Anastrozole Top Patent Applicant Analysis (Figure 2) further supports the fact that there is not any one major player from a generics perspective and also shows a relative lack of patenting activity by AstraZeneca for protecting the secondary attributes of the Arimidex product.

In conclusion, aside from the indication patents identified, AstraZeneca has not gone to significant lengths to protect Arimidex beyond expiry of the molecule patent and its associated extensions. With the expiration of patent protection on the active ingredient in the US in June, Arimidex has faced stiff generic competition. In most European member states AstraZeneca will maintain product monopoly for Anastrozole until February 2011. These markets will see a similar generic response to the US upon expiration of molecule patent protection as generic competitor vie for their share in the Anastrozole market.

Comprehensive data for patent families relating to Anastrozole, based on professional patent searching, may be accessed by subscribing to the GenericsWeb Pipeline Developer report which include twelve monthly updates to keep you abreast of recently published patents and applications. GenericsWeb Pipeline Selector reports (Core and Extended) are available for any active ingredient upon request.