This article covers events which occurred between May and August 2022. The previous update is available here.

The Federal Court has ordered Google to pay $60 million in penalties for misrepresenting to Android users that the phone setting titled "Location History" was the only setting which affected whether Google collected their personal location data. In fact, there was another phone setting called "Web & App Activity" which also enabled Google to collect personal location data of users (and was turned on by default), even if the "Location History" setting was turned off. An example of the statement for the "Location History" setting is shown below: 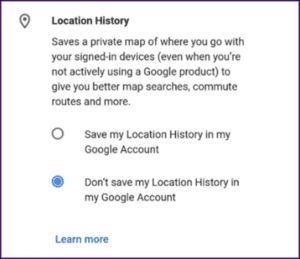 The Court had previously found that this was misleading. The ACCC and Google made joint submissions to the Court that a penalty of $60 million was appropriate, which were accepted by the Court. The Court also made orders for compliance training. The ACCC media release can be viewed here.

Samsung has admitted that it misled consumers about the water resistance of various Samsung Galaxy phones in advertisements (which can be viewed here). While the advertisements represented that the phones could be safely used while submerged in pool or sea water, the phones were not rated for this level of water resistance and there was a high risk of water damage if they were used in this way. Having admitted that this conduct was misleading following the ACCC instituting proceedings in 2019, Samsung and the ACCC made joint submissions for $14 million in penalties, which were accepted by the Court. The ACCC media release can be viewed here.

As we reported, the Federal Court previously found that ticket reselling marketplace Viagogo had breached the Australian Consumer Law by making various misrepresentations on its website, including that it was an "official site" when this was not the case. In a subsequent decision (which we covered in our October 2020 update), the Court ordered that Viagogo pay $7 million in penalties for the misrepresentations, bearing in mind that the conduct was deliberate and was made "on an industrial scale". The Full Court of the Federal Court has now dismissed Viagogo's appeal against both the liability and penalties decisions, upholding the previous decisions that Viagogo had engaged in misleading conduct in relation to the various representations on its website and that $7 million was an appropriate penalty. The ACCC media release can be viewed here.

The Federal Court has declared that 38 terms used in contracts between Fuji and small businesses regarding printers and related software are unfair and void, following Court action by the ACCC. The contract terms included automatic renewal, disproportionate termination rights, limitation of Fuji's liability under the contract, and unfair payment terms. Fuji admitted that the terms in question were unfair, and has therefore been ordered to not rely upon the contract terms in relation to small businesses (businesses employing less than 20 staff) and to implement a compliance program. The ACCC media release can be viewed here.

The Federal Court has ordered that CFMEU and construction company Hutchinson pay penalties of $750,000 and $600,000 respectively for breaching competition laws by entering into an agreement to boycott a waterproofing subcontractor at a Brisbane building site. Australian competition law prohibits contracts, arrangements, or understandings for the purpose of preventing or hindering the acquisition of goods or services from a supplier. The Court previously found that CFMEU had induced Hutchinson's contraventions by threatening or implying that there would be industrial action if Hutchinson did not stop using the subcontractor, on the basis that the subcontractor was not covered by an enterprise bargaining agreement with CFMEU. The ACCC media release can be viewed here.

The ACCC has sued Airbnb, alleging that the company misled Australian consumers into believing that prices on its website were in Australian dollars when in fact they were in American dollars. The ACCC alleges that, between January 2018 and August 2021, Airbnb displayed prices on its website and app to Australian consumers using only a dollar sign, without making it clear that these prices were in US dollars. While in some cases Airbnb referred to the price as 'USD', this only occurred in small text on the last page of the booking process, once the consumers had already clicked to reserve their accommodation. The ACCC further alleges that Airbnb misrepresented to consumers who complained about this pricing that prices were shown in American dollars because the user had selected this currency, when that was often not the case. The ACCC media release, including the Concise Statement used to institute the proceeding, can be viewed here.

The ACCC has commenced contempt of court proceedings against Ultra Tune, alleging that Ultra Tune breached orders preventing it from contravening parts of the Franchising Code of Conduct and for failing to comply with Court orders for a compliance program. The new proceedings follow the Court's earlier finding in 2019 that Ultra Tune had breached the Australian Consumer Law and the Code by failing to ensure that its marketing fund statements contained sufficient detail to provide meaningful information to franchisees. The ACCC now alleges that Ultra Tune failed to update its disclosure statements and to prepare marketing fund statements within the timeframe required by the Code, in breach of Court orders. The ACCC also alleges that Ultra Tune failed to ensure that the officer in charge of its compliance program would provide quarterly reports to the company as required by the Court orders. The ACCC media release can be viewed here.

ACCC commences proceedings against Mastercard for misuse of market power

The ACCC has commenced proceedings against Mastercard, alleging that it engaged in conduct with the purpose of substantially lessening competition in 2017. The ACCC alleges that Mastercard entered into agreements with businesses that provided these business with discounted rates for Mastercard transactions, provided they committed to processing all or most of their transactions through Mastercard rather than Eftpos. The ACCC claims that this was intended to substantially lessen competition by deterring businesses from using Eftpos for debit transactions. The ACCC media release, including the Concise Statement used to institute the proceeding, can be viewed here.

Shortly after the proceeding was issued, the ACCC announced that it will be focusing on competition issues associated with the shift to digital payments. The ACCC media release regarding the announcement can be viewed here.

The ACCC has commenced proceedings against waste company Bingo Industries and its former managing director and CEO alleging criminal cartel offences relating to price fixing for demolition waste services. The ACCC alleges that, in mid-2019, Bingo Industries agreed with competitors to fix and increase prices for the supply of skip bins and waste processing services in Sydney. Bingo Industries has plead guilty to the offences. The ACCC media release can be viewed here.

Various companies have agreed to financial penalties and other remedies following ACCC action:

The ACCC has announced that its Digital Platforms Service Inquiry will examine the state of competition and consumer issues for social media services in Australia as a part of its upcoming sixth interim report. The report will deal with issues such as barriers to entry for businesses and consumers using social media platforms, the impact of scams on the platforms, and the risk of users being exposed to misleading or deceptive conduct. The ACCC media release can be viewed here, including details of how stakeholders can make submissions on these issues to the ACCC.