One of the Commission's objectives is to provide information to potential applicants, so that they can be better informed as to what can be achieved through making general protections claims, also known as adverse action claims.

As a cautionary tale for the employer, however, it is worth noting that while most cases involving monetary settlements are for sums less than $10,000, a number of cases involved settlements in excess of $50,000 and even $100,000.

The General Protections provisions in the Fair Work Act aim to protect workplace rights and freedom of association, and to protect employees from workplace discrimination. Under section 365, persons who believe that they have been dismissed in contravention of the general protections provisions can make a general protection claim involving dismissal.

WHAT THE NUMBERS SAY

In 2015-16, the Commission received 3,270 general protections claims, also known as adverse action claims, involving dismissal. The majority of these claims were resolved at the stage of conciliation, being the 70% of cases that finalised without the need to issue certificates (Figure 1: s. 365 – General Protections Disputes involving Dismissal).

It is worth noting, however, that a 23% of cases are unable to be resolved in the Commission, and proceed to the courts. 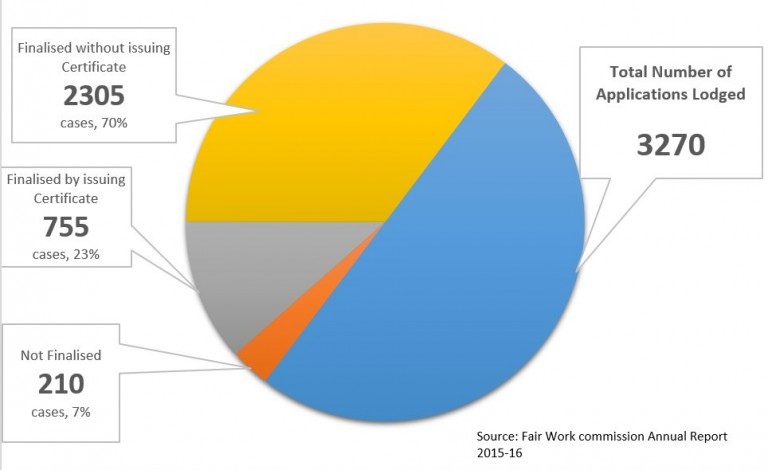 Of the cases settled, there appears to be a mix of outcomes, including monetary and non-monetary outcomes. Over 70% of cases resolved involved some monetary settlement (Figure 2: Outcomes of Disputes Settled 2015-16). HOW MUCH ARE SETTLEMENTS IN GENERAL PROTECTIONS CLAIMS?

Perhaps as a sign of some employers' willingness to settle cases without proceeding to the courts where settlement sums are uncapped, 5% of cases have settled with sums in excess of $100,000 in 2015-16 (Figure 3 – Range of outcomes where a settlement involved monetary payment 2015-16).

While this represents a small portion of claims made, the employers in these cases have nonetheless had to shoulder what would have been a significant financial burden as a result of the claims made. Figure 3 Range of outcomes where a settlement involved monetary payments

WHAT TO CONSIDER BEFORE LODGING A GENERAL PROTECTIONS CLAIM

The 2015-16 Annual Report from the Fair Work Commission has for the first time presented insights into the sums for which general protections applications have settled for in the past year.

For individual employees considering whether to make claims against their employers, these figures provide an objective perspective to what can be reasonably achieved through the lodgement of a claim. In the majority of cases, employees' expectations should be modest.

For the employer, these figures are a reminder that the potential for claims by employees remain a tangible financial risk to employers who may have inadvertently contravened the general protections provisions, even if due to ignorance or inexperience.

ARTICLE TAGS
Australia Employment and HR Employee Rights/ Labour Relations Employment Litigation/ Tribunals Unfair/ Wrongful Dismissal
POPULAR ARTICLES ON: Employment and HR from Australia
Are you ready for the new annualised salary arrangements taking effect from 1 March 2020?
PCC Employment Lawyers
Discusses significant operational impact on employers who pay annualised salaries to employees covered by these modern awards.
Abandonment of employment - can you fire an employee for not showing up to work?
Coleman Greig Lawyers
Absence from work may be a reason to dismiss, but it is not an exception to rules about termination or adverse action.
Coronavirus – what employers need to know
Coleman Greig Lawyers
The coronavirus global health emergency outbreak changes daily, so employers should be vigilant about keeping up to date.
Apprentice unfairly dismissed for refusing to work overtime
MDC Legal
The decision is a reminder for employers to carefully consider whether requests to work additional hours are reasonable.
Using annualised salaries: are you ready for 1 March 2020?
Bartier Perry
Article explains the changes to salary laws, the new obligations and what employers need to do.
Casual employment risks continue
McCullough Robertson
Employers should continually review arrangements with casual employees, for any changes in the employment relationship.
FREE News Alerts
Sign Up for our free News Alerts - All the latest articles on your chosen topics condensed into a free bi-weekly email.
Register For News Alerts
Article Tags
Australia Employment and HR Employee Rights/ Labour Relations Employment Litigation/ Tribunals Unfair/ Wrongful Dismissal
Similar Articles
Powered by mondaq AI
MATCH
95%
Insights into general protection claims in the Fair Work Commission MDC Legal
Related Articles
ASIC relieves smaller not-for-profits and charities from whistleblower policy requirement Cooper Grace Ward
What Does The Future Hold? – The Changing Landscape For Employers In Australia Vincent Young
Annualised salaries: what are the options? Corrs Chambers Westgarth
FWC endorses approach to dismiss injured employee McCullough Robertson
Managing coronavirus (but not the kind you get after a big weekend) Marque Lawyers
Comparative Guides
Anti-Corruption & Bribery
Merger Control
Patents
Trademarks
Mondaq Advice Centres
Global
Trademarks in SAARC Countries
Global
Investment Immigration
More MACs