For more than a decade, the investment climate in Argentina led many investors to dismiss the nation as a place to invest. Protectionist policies, deteriorating economic conditions, among a host of other factors, made it increasingly difficult to do business in the country. From a mining perspective, national policies were only half the problem.  Miners faced significant uncertainty and confusion because of the way that Argentinean provinces regulated the sector differently and some provinces halted mining outright.

Since President Mauricio Macri took office at the end of 2015, reforms have taken shape to fix the economy and stimulate investment. Some projects that had been halted are starting to reawaken. New studies are underway at some large copper projects and the lithium sector is stronger than ever. Investor interest in general is high.

Macri immediately after being elected lifted currency controls and set to work negotiating a settlement with creditors that allowed Argentina to issue its first international bonds in 15 years. The president also eliminated restrictions on taking profits out of the country and a burdensome 5-10% tax on mining export revenues, as well as restrictions on imports that impacted mining companies in need of quality equipment and parts.

Sectorial reforms followed, including the elimination of the energy subsidies that had been in place for more than a decade, which doubled as a key fiscal reform. Meanwhile, the Macri administration also deregulated the labor market, a key change for mining companies looking to boost productivity and cost costs.

In Argentina, the provinces own the rights to the minerals beneath their soil, making for a complex environment for mining investors. Argentina has become notorious for the discrepancies in the mining investment conditions in individual provinces.

In February, the government unveiled a federal mining agreement aimed at unifying policy across the provinces, setting forth the basis for state mining policy. The agreement was crafted by provinces mining council Cofemin, federal environmental council Cofema and the mining ministry in a process including dialogue with industry representatives such as mining chamber CAEM, and unions.

Key points include a cap of 3% on provincial royalties plus up to 1.5% for a provincial infrastructure fund, according to the mining ministry. The agreement also aims to improve environmental management with better supervision and best practices, improve public consultation processes, promote local purchasing and employment, foster energy efficiency and the use of renewables, supported by the booming investment in generation attracted by Argentina's RenovAR tenders.

The agreement also calls for the creation of a national mining information center, a unified mining registry and cadaster, a transparency policy and a special lithium council between the federal government and the provinces of Catamarca, Jujuy and Salta.

The idea is that provinces subscribed to the agreement cannot unilaterally pass prohibitive legislation; however, it is still up to each province to ratify the agreement and it remains unclear whether all will do so.

In that sense, the agreement could mainly serve to show investors more clearly what is already true – that many Argentine provinces do welcome mining activity – and support Macri's overall message to investors of a new era of growth in the country. The federal mining agreement must also be ratified by the national congress and the president before it becomes law.

A number of mining companies with projects that were on hold in mining-friendly provinces have restarted studies or are considering doing so, including Glencore, which restarted studies at El Pachón, and Barrick Gold, which has started a prefeasibility study for an underground, Argentina-only version of its Pascua Lama project on the Chile border. Yamana Gold has hinted it could reactivate Agua Rica.

The elimination of the mining export tax also inspired some to consider extensions at operations that had been programmed for closure, including Alumbrera, Pirquitas and Manantial Espejo.

While Argentina hosts multiple high-potential, large-scale mining projects, many analysts suggest that the bulk of investment will occur further into the future. Part of the reasoning behind this conclusion rests also on the tepid outlook for copper, gold and silver prices for the medium term and the still-cautious attitude toward large investment decisions prevalent among major mining companies.

A specific set of conditions have come together to drive Argentina's lithium industry. Mining authorities are forecasting the country will be the world's biggest lithium producer with annual capacity of 165,000 tonnes by 2020, meeting 45% of total demand.

US-based FMC Lithium has been operating since 1990 at the Salar del Hombre Muerto, its mine in Salta province and processing infrastructure in Catamarca. Since then, more than 20 additional companies have come to Argentina to develop lithium assets exclusively in those two provinces and Jujuy, including Orocobre, Galaxy Resources, Eramet, Ganfeng Lithium, Albemarle and SQM. The region forms part of the so-called lithium triangle whose other two corners stretch into southwest Bolivia and northeast Chile. 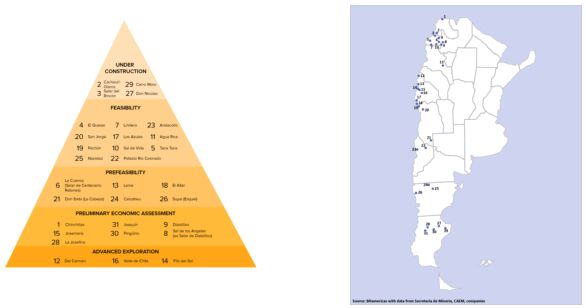 Argentina's biggest in-country challenge to realizing the vision of a new era of growth remains waiting for the consolidation of policy and business confidence. The mining industry is not alone in this; a lack of clarity around the infrastructure tenders – in particular whether financial institutions like the World Bank or IDB will provide backing – could hamper the bidding processes for an as-yet undefined list of billions of dollars of projects.

However, if the two rounds of power tenders held so far under Macri are anything to go by, there is certainly hope. So far, the administration has awarded 2,424MW of renewable energy projects requiring US$4bn of investment and another 2,871MW of thermal projects, expected to start up by 2018.

The parliamentary elections in October will be critical. The president's approval ratings have weakened in recent months and the elections will serve as a gauge of the government's performance so far and a harbinger of what is to come. A poor outcome for the ruling party opens the door to mobilization from the opposition, the analyst says. "The government really needs to do well in the midterm elections and investors are really waiting for that."

When it comes to mining, there are some indications that activity is starting to increase, but investment may be slower to roll in than the government envisioned. This is only partly due to the country's still immature economic recovery and policy consolidation. Mining companies are still cautious following five years of low metal prices and generalized contraction.

While questions remain and many investors will be waiting for a little more confidence, Macri's ascension and reforms combined with a better outlook for metals prices mean Argentine mining is set to benefit from impeccable timing.