The Old Treaty was in force for almost six decades and had been amended several times (the 4th and latest amendment of the Old Treaty entered into force only last year) These amendments were necessary in particular to accommodate OECD developments in the field of the exchange of information and to close a well-known loophole resulting from the divergent interpretations of Luxembourg and French case law on income derived from French real estate by a Luxembourg company. Nevertheless, Luxembourg remained a hub for structuring French real estate investments through Luxembourg funds. The New Treaty contains substantial derogations from the 2017 OECD Model Tax Convention ("OECD MTC").

The main differences between the Old Treaty and the New Treaty may be summarised as follows:

The residence definition generally follows article 2 OECD MTC, but is completed by the following precisions:

Pursuant to the protocol to the New Treaty ("Protocol"), it is understood that an undertaking for collective investments ("UCI") that is resident in a Contracting State and assimilated under the laws of the other Contracting State to a domestic UCI, benefits from articles 10 (dividends) and 11 (interest) for the portion on the income corresponding to the entitlements of residents of either Contracting State or of a State with which the source State has concluded a treaty on administrative assistance for the purpose of preventing tax evasion and avoidance. The situation of UCIs is improved compared to the Old Treaty by being able to claim the exemption / reduced withholding tax rate on dividends under the aforementioned conditions.

The definition of a permanent establishment is updated and reflects the provisions of article 5 OECD MTC.

A building site or construction or installation project constitutes a permanent establishment only if it lasts more than 12 months (as opposed to 6 months under the Old Treaty). Said 12- month period is however calculated broadly: separate periods of activity of more than 30 days by an enterprise on a building or construction site in the other State are added to determine the 12- month period. Similarly, periods of connected activity of more than 30 days exercised on said building or construction site by an enterprise closely linked to the main enterprise are also taken into account for the 12-month computation.

The new article 10 relating to dividends is likely to have the most significant impact on existing cross-border investments:

The capital gains treatment follows article 13 OECD MTC, including the taxation of gains from the alienation of shares or comparable interests which, at any time during the 365 days preceding the alienation, derived more than 50% of their value directly or indirectly from immovable property situated in a Contracting State in that State.

Following the OECD MTC, employment income is generally taxable only in the State where the professional activity is exercised, save for temporary missions which do not exceed 183 days and for which the remuneration is paid and borne by an employer in the employee's State of residence.

The Protocol further specifies that a resident of a Contracting State who pursues employment in the other Contracting State and who, during a taxable period is physically present in the first State and/or in a third State to pursue employment during one or more periods not exceeding in aggregate 29 days, is deemed to have effectively exercised his professional activity in the other State for the whole taxable year. This provision is of significant interest for the 95,000 French commuters who are employed in Luxembourg: in case they are professionally active either in France or in a third State (being neither France nor Luxembourg), they will remain taxable only in Luxembourg provided their activity outside Luxembourg does not exceed 29 days within the fiscal year.

The New Treaty follows article 22 OECD MTC and capital represented by immovable property may be taxed in the State where it is situated. This provision allows France to tax French real estate directly owned by Luxembourg residents in accordance with the new wealth tax on real estate (impôt sur la fortune immobilière).

Indirect holdings through companies may however not be taxed in France.

The New Treaty includes an anti-abuse provision as provided for by article 20 OECD MTC. Accordingly a benefit under the New Treaty shall not be granted in respect of an item of income or capital if it is reasonable to conclude, having regard to all relevant facts and circumstances, that obtaining that benefit was one of the principal purposes of any arrangement or transaction that resulted directly or indirectly in that benefit, unless it is established that granting that benefit in these circumstances would be in accordance with the object and purpose of the relevant provisions of the New Treaty.

The New Treaty will enter into force after the notifications regarding the ratification by each Contracting State have been exchanged.

The provisions of the New Treaty will apply as follows: 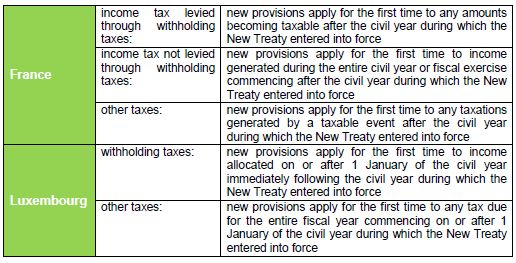 It is regrettable that the New Treaty does not foresee any transitional provisions to give the industry sufficient time to adapt its cross-border investment structures, in particular as regards the new dividend treatment of French real estate vehicles, which furthermore is not in line with the 2017 OECD MTC.

In practice, the application of the New Treaty as early as 2019 will require that the ratification process by the respective parliaments, as well as the exchange of the notifications thereof, be finalised by the end of this year.

In the meantime, it may be expected, in the light of the new tax treatment of dividends distributed by French real estate vehicles to Luxembourg residents, that the relevant real estate investment structures will need to be revisited.