On 22 December 2021, the European Commission published a Directive proposal setting out rules aimed at tackling the abusive use of so-called shell companies (the "Proposal"), to be implemented into Member States' national law by 30 June 2023 and become effective from 1 January 2024.

In a nutshell, the Proposal targets EU Member State entities mainly involved in cross-border activities whose daily management and decision-making is outsourced. Certain undertakings are considered from the outset as being low-risk and are thus excluded from the scope of the Proposal (e.g. listed companies and regulated financial undertakings, notably UCITS and AIFs). The Proposal introduces specific reporting obligations in order to identify so-called shell entities.

Once qualified as a shell, an undertaking would be denied treaty benefits and EU directive access.

Companies will want to take a critical look at their structure in order to anticipate potential impacts that may arise upon implementation of the new rules.

You can access the full text of the Proposal by clicking here.

IDENTIFICATION OF A "SHELL" ENTITY:

1.    "At-risk" undertakings:
Undertakings that meet the following cumulative criteria are subject to reporting obligations, unless they fall outside of the Proposal's scope:
a)    deriving 75% of their income from passive income (notably interest, royalties and dividends);
b)    mainly engaging in cross-border activities or passing on revenues to foreign shareholders; and
c)    outsourcing daily management and decision-making for significant functions.

Undertakings excluded from being "at-risk":
The Proposal explicitly excludes from its scope certain undertakings such as companies listed on a regulated stock exchange, regulated financial undertakings (e.g. AIF, UCITS) or undertakings involved in holding activities resident for tax purposes in the same Member State as the undertaking's shareholder(s).

In addition, undertakings having sufficient resources (i.e. 5 full-time employees involved in operations) are also excluded from the scope.

On request temporary exemption:
An undertaking found to be "at-risk" can request an exemption from its reporting obligation if it can provide evidence that its existence does not reduce the tax liability of the beneficial owner(s) or of its group. This exemption is granted for 1 year and can be extended to 5 years.

2.    Reporting obligation:
An undertaking considered at-risk by the first step set forth in the Proposal is asked to declare in its tax return if it meets the 3 indicators of minimum substance regarding (i) premises, (ii) an EU bank account and (iii) an exclusive local director dedicated to the group, or full-time local employees. The tax return should be accompanied with documentary evidence.

Member States shall lay down penalties of at least 5% of the undertaking's turnover in the relevant tax year, in the case of default or late reporting.

3.    Presumption of minimum substance:
An undertaking that fails to meet at least one of the indicators listed in step 2 shall be presumed to be a Shell for the purposes of the Proposal.

On the contrary, if the reporting reveals that the undertaking meets all of the indicators, it shall be presumed not to be a Shell for the purposes of the Proposal.

4.    Rebuttal of the presumption:
An undertaking presumed not to have the minimum substance can rebut this presumption if it provides certain specific additional information that proves that the undertaking has performed and continuously has control over, and bears the risks of, the business activities that generated the relevant income (or in the absence of income, the undertaking's assets).

MONITORING  OF THE SHELL

To ensure that the information is available in a timely manner to all Member States that may have an interest in it, the information will be automatically exchanged through a central directory by deploying the existing mechanisms of administrative cooperation in tax matters.

The Shell shall be denied the right to a certificate of residence or shall be granted a certificate which prescribes that the Shell is not entitled to the benefits of tax treaties.

Member States other than the Member State of the Shell shall disallow any tax advantages which have been obtained, or could be obtained, by the Shell in accordance with a double tax treaty or similar agreement (Treaty) and Directives.

In practice, the impact of the Proposal will be felt at three (3) levels: 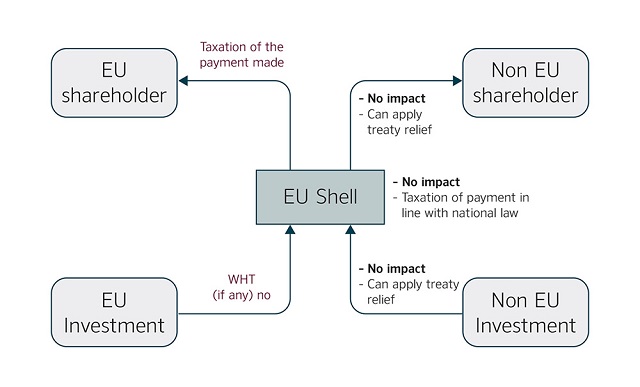 TIMING AND NEXT STEPS

The European Commission is expected to adopt the Proposal during the first quarter of 2022. Member States would then have to implement the rules into their national law by 30 June 2023, and apply them as of 1 January 2024.