This time, we're reviewing the share of appeals accounted for by final judgments in the 1990s.  As a reminder, we're defining "criminal" broadly to include quasi-criminal cases such as habeas corpus, as well as juvenile justice cases.  Until 2011 when Illinois abolished the death penalty, we also include direct appeals to the Supreme Court from death penalties in the trial courts. 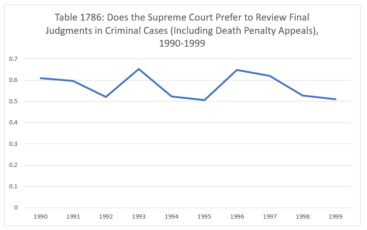