by Richard J. McKenna and Kiri Lee Sharon
Foley & Lardner
Your LinkedIn Connections
with the authors

Counterfeit goods enter the U.S. every day, with the value of global trade in counterfeits estimated to reach nearly $2 trillion by 2022. As just one example, CBP announced in early July that it intercepted $5.5M in counterfeit sleepwear, including imitation Gucci products, at a seaport in California. Fake apparel, footwear, watches and jewelry, handbags and wallets, and consumer electronics are among the top items seized by CBP, according to a 2020 DHS report.

CBP has authority to detain, seize, forfeit and ultimately destroy merchandise entering the U.S. that bears an infringing trademark or copyright that has been registered with the U.S. Patent and Trademark Office or the U.S. Copyright Office and then recorded with CBP. Existing federal customs law provides for seizure and forfeiture of "merchandise or packaging in which copyright, trademark, or trade name protection violations are involved."  19 U.S.C. § 1595a(c)(2)(C).

The CBP program allows active participation of the intellectual property rights (IPR) owner, who must record the registered trademark or copyright with CBP. CBP may request that the owner assist in determining whether a counterfeit mark is present. Often, owners will provide training materials and product guides to CBP agents to aid in distinguishing genuine merchandise from counterfeits. Under the CBP's Donation Acceptance Program (DAP), an owner can donate goods or services to help CBP to authenticate merchandise. See 19 C.F.R. § 133.61. Through the DAP, CBP has partnered with companies, including Otter Products, LLC, Procter & Gamble, Apple, Inc. and Cisco Systems, to detect counterfeits.

Current CBP authority does not extend to design patents, as noted above, and therefore, design patent owners seeking to halt import of infringing articles must turn to the International Trade Commission (ITC) or federal court. ITC investigations, while typically much faster than district court proceedings, take many months to resolve, are typically costly and require a great deal of documentation and effort on the part of the design patent owner. In order to succeed at the ITC, the patent owner must show importation, infringement and a domestic industry related to the articles protected by the patent.

As noted, the CBP is currently authorized to seize products believed to infringe registered U.S. trademarks, such as the trademark for an early model iPhone as seen below: 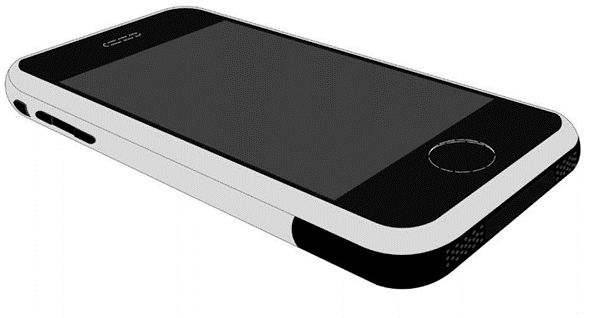 However, CBP currently lacks authority to seize products believed to infringe design patents, such as the design patent seen below, which is directed to an early model iPhone, similar to that depicted above: 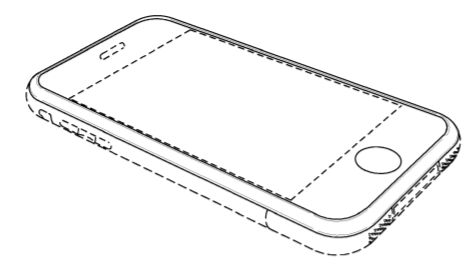 As demonstrated by the images above, U.S. trademark registrations and granted design patents cover overlapping subject matter, while both forms of intellectual property carry the same limitation, in that protection is afforded only to aesthetic, nonfunctional design elements. With such significant overlap in subject matter, it would not appear to impose a significant burden on CBP to expand the scope of its jurisdiction to include design patents.

The proposed CGSA revises the Tariff Act of 1930 to explicitly identify design patents in the listing of intellectual property rights for which infringing merchandise may be seized and forfeited under 19 U.S.C. § 1595a(c)(2)(C).

Border enforcement of design patent rights may be implemented in an analogous way to the trademark protocol. The following is a general overview of the process when CBP suspects imported merchandise to violate trademark rights:

1) CBP detains the articles suspected to infringe the recorded mark for up to 30 days, and notifies the importer within five days. The importer has 30 days to deny infringement.

2) If the importer does not provide an adequate response to the CBP notice within seven days (or does not respond at all), CBP notifies the owner of the mark, and may provide unredacted images of the suspect articles.

3) After 30 days with no sufficient response or after the owner demonstrates counterfeiting, CBP seizes and eventually destroys the articles.

The importer may petition for relief during the initial 30-day detainment and 30 days after notice of a seizure, and can abandon the goods or work out a compromise with the rights owner.

As outlined above, this procedure moves far more rapidly than ITC or district court litigation and helps block suspected counterfeit products from entering the U.S. marketplace, thereby protecting both the U.S. consumer and the design patent owner.

Further, public-private partnerships such as the DAP could likely be extended to allow U.S. design patent owners to submit authentication aids.

Various industry groups have voiced strong support for the proposed legislation, including the Footwear Distributors and Retailers of America, the Intellectual Property Owners (IPO) and American Intellectual Property Law Associations, and the International Trademark Association (INTA). (Foley & Lardner is an IPO member and an associate member of the INTA.) Stakeholders have the opportunity to influence the legislation through dialogue with its sponsors before it goes to markup.