United States: Nirvana Smiling As Motion To Dismiss Its Copyright And Trademark Claims Is Denied

Nirvana—the rock band often credited for popularizing the alternative/grunge rock genre—claims ownership in a copyright for a "happy face" design for a tee shirt, as depicted below. The design was created in 1991 by Kurt Cobain, Nirvana's lead singer and registered in 1993 by Nirvana, Inc. (Reg. No. VA0000564166; the "'166 Registration"). The '166 Registration was later assigned to Nirvana in 1997 and then to Nirvana LLC ("Nirvana LLC"), the plaintiff in this action, in 1998. 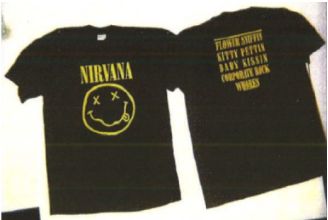 Nirvana LLC also claims trademark rights in the "happy face" based on continuous use since 1992 to identify its music and licensed merchandise.

In November 2018, fashion designer Marc Jacobs released, and Saks and Neiman Marcus sell, a clothing collection—called the "Bootleg Redux Grunge—that depicts a variation on the Nirvana "happy face" logo, as depicted below:

To establish copyright infringement, Nirvana LLC must demonstrate ownership of a valid copyright and related registration.  Defendants claimed that Nirvana LLC failed to do so because it did not allege that Kurt Cobain, the original author of the Nirvana "happy face", transferred his rights in the "happy face" design to Nirvana, Inc. prior to Nirvana Inc.'s registration of the design in 1993. The court held that "such an allegation [was] not required to state a claim," and that adequacy of Nirvana LLC's chain of title was an issue Defendants must respond to on the merits through discovery. Nonetheless, the court noted the importance of the "chain of title" issue, stating that it was one "for which prompt discovery [was] warranted" and ordered the parties to meet and confer to adopt a process for focused discovery related to the chain of title.

Defendants argued that the date of first publication in the '166 Registration is inaccurate, and, as a result, the '166 Registration is invalid.  The '166 Registration claims a first publication date of November 1, 1991. Defendants claim that Nirvana LLC admits, in its complaint, that the "happy face" design was first published on a poster promoting Nirvana's Nevermind album no later than September 13, 1991. But, according to the Copyright Act, a "public display" of a work does not itself constitute publication. The work must either be distributed or offered to be distributed to a group of persons for further distribution. The court found that, when viewed in the light most favorable to Nirvana LLC, it was possible "the poster could have merely been 'publicly displayed,' rather than distributed," and Defendants had not met their burden to producing evidence indicating otherwise. Indeed, the court refused to consider such evidence because it was inappropriate at the motion to dismiss stage. As such, Nirvana LLC's pleading adequately alleged there are no inaccurate statements in the '166 Registration and the Registration is valid.

According to the court, "a review of the images confirms that the allegation as to substantial similarity is sufficient." 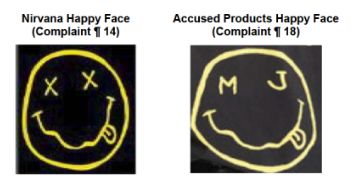 Specifically, the court found that both works included (1) "the slightly asymmetrical circle shape of the face," (2) "the relatively wide placement of the eyes," (3) "the distinctive 'squiggle' of the mouth, and (4) the placement and shape of the "stuck out" tongue. The only discernible difference, according to the court, was the use of "MJ" eyes in the accused product versus "X" eyes in the '166 Registration.  But "this difference [did] not, as a matter of law, preclude Plaintiff's substantial similarity claim," and the court thus denied Defendants' motion to dismiss Nirvana LLC's copyright claim.

Finally, the court found that the Copyright Act did not preempt Nirvana LLC's federal or state trademark infringement claims. For the federal claims, the court found that "[t]he Lanham Act claim cannot be preempted by the Copyright Act." And for the state claims, there were sufficient allegations as to the distinct elements required by the state trademark claims such that they were not preempted.