We haven't had a surname case in a while. Here, the USPTO refused to register the proposed mark BORRELLO'S for various cell phone accessories and related goods, on the ground that the mark is primarily merely a surname under Section 2(e)(4). Applicant James Lyons argued that the term does have a non-surname meaning: it is the name of a commune and town in the province of Chieti in the Abruzzo region of Italy, which is a place of historical significance, named after the iconic ruling Borrello family. How do you think this came out? In re James Lyons, Serial No. 90242811 (November 10, 2022) [not precedential] (Opinion by Judge Mark Lebow). 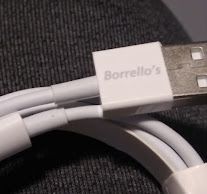 Examining Attorney Toby Bulloff provided evidence from the LEXIS/NEXIS surname database showing that BORRELLO appearing 761 times as a surname nationwide. The Board found from the evidence that BORRELLO is a surname. Its surname significance is not diminished by the fact that it is presented in its possessive form.

The Examining Attorney conceded that BORRELLO is a rare surname. Nevertheless, "[t]he relevant question is not simply how frequently a surname appears ... but whether the purchasing public for Applicant's goods is more likely to perceive Applicant's proposed mark as a surname rather than as anything else." In re Tapio GmbH, 2020 USPQ2d 11387, at *9 (TTAB 2020).

He also provided a page from Wikipedia identifying four purportedly notable people having the surname BORRELLO, but only one was from the United States (Brian Borrello, an American artist). Applicant asserted that BORRELLO is an "extremely rare surname."

It was undisputed that "no one associated with Applicant uses or has the name Borrello." The Examining Attorney provided negative dictionary evidence from Dictionary.net, as well as from Collins' Italian-English dictionary, to show that BORRELLO has no meaning in English or Italian.

Applicant Lyons argued that the primary meaning and significance of Applicant's BORRELLO'S mark is in connection with a commune and town in the province of Chieti in the Abruzzo region of Italy, which is a place of historical significance, named after the iconic ruling Borrello family, now reportedly extinct.

As to whether the term BORRELLO has another recognized significance other than as a surname, the Board observed that "[a] mere Wikipedia page hardly provides a sufficient basis for us to find that BORRELLO, the name of a tiny commune in a foreign country, would be familiar to an appreciable segment of Americans or would be perceived by them as anything but an obscure geographic place."

The Board agreed with the Examining Attorney that BORRELLO has the structure and pronunciation of a surname, particularly an Italian surname, and that Applicant's use of the possessive is consistent with the use of a surname.

The Board found that "there is no persuasive evidence in the record that [BORRELLO'S] would be perceived as anything other than as a surname in the United States. Eximius Coffee, 120 USPQ2d at 1283. And so, if affirmed the refusal to register.