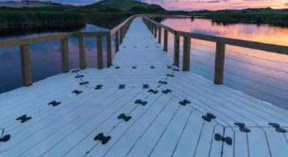 On a motion for judgment on the pleadings, courts generally accept as true all material facts alleged by the nonmoving party. However, in some circumstances, exhibits "can overcome the presumption that the nonmoving party's allegations are true." Snap Deck attached to its answer/counterclaim a copy of E-Z Dock's expired utility patent no. 5,281,055, entitled "Floating Dock,' which discloses E-Z Dock's modular floating dock system, "including the coupler at issue." 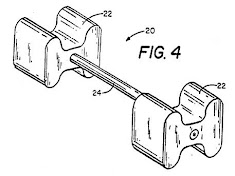 The Board observed that "a utility patent is critical to the non-functionality element of a trade dress claim based on the patented product." See TrafFix ("A utility patent is strong evidence that the features claimed therein are functional" (emphasis added)). [Note: the '055 patent did not claim the dog-bone shape, it merely disclosed it - ed.]

The patent "explain[ed] the functionality of the shape": to ensure that the anchors will remain secure and the docking sections will not separate. EZ-Dock pointed to the statement in the patent that the socket shape "can vary appropriately," but the court was not moved: "the dog bone shape of the couplers is the reason EZ-Dock's inventions works." The court noted that TrafFix teaches that the existence of an alternative design does not render a functional design non-functional. [Note, however, that in TrafFix, the design at issue was claimed in the expired patent - ed.]

The court concluded that E-Z Dock could not satisfy the non-functionality element of its trade dress claim. "EZ-Dock cannot enjoy the protection of a full patent term, then use the Lanham Act to extend its monopoly on the patented design." [Actually, the patent didn't "cover" a dog-bone shaped connector - ed.].

And so, the Board entered judgment in favor of Snap Dock.