by Shailesh Sahay (Boston) , Aaron Lang (Boston) and Cloe Pippin (Boston)
Foley Hoag LLP
Your LinkedIn Connections
with the authors
To print this article, all you need is to be registered or login on Mondaq.com.

On December 1, 2022, the Environmental Protection Agency ("EPA") proposed a sweeping new rule for the Renewable Fuel Standards ("RFS") Program, the federal government's flagship program for facilitating the production of renewable transportation fuels to offset fossil fuels. Administered correctly, the Program could be a critical tool to combat climate change, including by incentivizing needed low-carbon fuels for air travel and other difficult-to-electrify sectors.

The proposed rule is significant in many ways. It sets the volume targets and percentage standards for renewable fuels for the next three years (from 2023 to 2025). It establishes a new regulatory program for "eRINs," which are credits for "renewable electricity" produced from biogas and used to power electric vehicles. It also makes a host of other changes to how the RFS program is administered.

We summarize several of the key provisions below. Comments to the proposed rule are due to EPA by February 10, 2023.

Every year EPA must set the total volume of renewable transportation fuel required to be produced to offset fossil fuels. "Obligated parties," that is, gasoline/diesel refiners and importers, must either blend renewable fuels with fossil fuels or obtain credits, called RINs, that renewable fuel producers generate for each gallon of renewable fuel they produce. These volume requirements are converted to percentage standards. Obligated parties must multiply the percentages by the total amount of fossil fuel they produce to determine how many RINs they must procure each year. 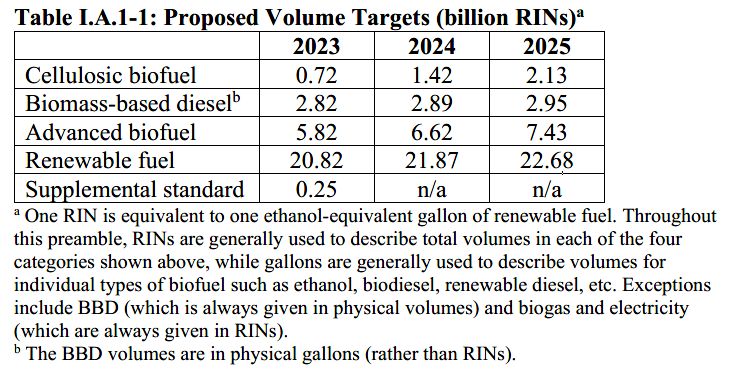 Setting these requirements for multiple years potentially provides certainty to industry. Yet the approach carries certain risks. In the past, EPA has developed the percentage standards using the Energy Information Administration's ("EIA") forecasts projecting gasoline and diesel volumes for the coming year in EIA's Short Term Energy Outlook ("STEO"). However, because the STEO's are only published annually for the coming year, EIA does not have STEO reports prepared for 2024 and 2025. EPA instead relied on EIA's 2022 Annual Energy Outlook ("AEO") to calculate its percentage standards. Unlike the STEO which focuses on providing forecasts for just the upcoming year, the AEO provides projections through 2050, a timeframe that is less predicable and more variable, which could prove to mean EPA's percentage standards are less precise and accurate than in prior years using the STEO.

The proposed rules would permit vehicle manufacturers to generate eRINs based on the light-duty electric vehicles they sell by entering into contracts with electricity generators that produce electricity from biogas. EPA would allow only the manufacturer to generate the eRIN, though it expects the eRIN's value will be distributed across all parties in the production chain.

EPA also proposes reforms to its approach to biogas as a renewable fuel feedstock. Specifically, EPA proposes to regulate biogas as a biointermediate—that is, a partly processed feedstock that is sent to another location to be converted into fuel. EPA approved a handful of biointermediates in a prior rulemaking but left biogas off the list. EPA now proposes to add biogas, with certain caveats. Importantly, EPA is not changing its rules for existing pathways for using biogas to produce compressed and liquefied renewable natural gas.

The proposed rule addresses other matters too numerous to summarize here but no less important to how the RFS Program could be administered going forward. These include RIN apportionment for anaerobic digesters, requests for comments on hydrogen fuel lifecycle analysis, proposed definitions for "ocean-going vessels" and what types of fuels are "produced from renewable biomass," food waste recordkeeping requirements, and bond requirements for foreign RIN-generating renewable fuel producers.

The proposed rule portends substantial changes to the RFS program. Will those changes help or hurt the production of needed low-carbon fuels? Parties wishing to comment on the proposed rule must do so by February 10, 2023.