On March 23, 2020, approximately two months after all briefs were submitted, the Fed. Cir. has denied the outstanding petitions for panel rehearing and rehearing en banc in Arthrex, Inv. v. Smith & Nephew, Inc. (CAFC No. 2018-2140) ( decision here). As a reminder, the Arthrex panel concluded that the PTAB's Administrative Patent Judges (APJs) were improperly appointed principal officers under the Constitution's Appointments Clause. To remedy this deficiency, the panel severed the APJ's Title 5 removal protections, thereby (according to the panel) rendering APJs inferior officers and prospectively curing any Appointments Clause infirmity in PTAB final written decisions post October 31, 2019. The Fed. Cir.'s rehearing denial leaves a change to the current Arthrex remedy in the hands of Congress or the Supreme Court.

Judges Moore, O'Malley, Reyna, and Chen concurred in the denial of the petitions for rehearing, which is unsurprising given that the original panel comprised Judges Moore, Reyna, and Chen. As to the current Arthrex remedy, Judge Moore wrote that the "curative severance and subsequent decisions from this court have limited the now constitutionally composed Board's burden of addressing cases on remand," which the concurring opinion calculated at 81 cases that have the potential to be vacated and remanded (37 appeals have been vacated and remanded thus far).

In his dissent, Judge Dyk, joined by Judges Newman, Wallach, and Hughes, argued that "the panel's remedy invalidating the Title 5 removal protections for APJs is contrary to Congressional intent and should not be invoked without giving Congress and the PTO the opportunity to devise a less disruptive remedy. Second, even if the Arthrex remedy (to sever Title 5 protections) were adopted, there would be no need for a remand for a new hearing before a new panel because, under this judicial construction, APJs will be retroactively properly appointed by the Secretary of Commerce and their prior decisions will not be rendered invalid."

As to an appropriate Arthrex­ remedy, Judge Dyk suggested that Congress could amend the IPR statute to provide agency review of APJ final written decisions, whether by way of a review board comprised of executive PTO officials, or solely by the PTO Director. To implement this fix, Judge Dyk would have stayed cases impacted by Arthrex to allow Congress (or possibly the PTO director) to designate such a rehearing panel. This panel could comprise, in Judge Dyk's view, the PTO Director, Deputy Director, and the Commissioner of Patents.

Judge Dyk's suggestion that Arthrex be stayed made "little sense" in Judge Moore's opinion, because "[s]taying the case, and any other pending appeal that challenges the Appointments Clause, would result in an unnecessary backlog of cases pending a congressional cure that is not guaranteed. And even if Congress did codify a new inter partes review scheme, those stayed cases would still need to be reprocessed on remand under the new scheme."

Finally, Judge Dyk indicated that the original panel's determination that the PTAB's APJs are principal officers is subject to question. Judges Hughes and Wallach penned separate dissents arguing that the APJs are inferior officers.

Overall, the Court's order included five separate opinions. Given the clear disagreement among the different circuit judges, it seems that an en banc denial was appropriate as the Court (or at least a majority of the Court) could not agree on an appropriate path forward.

Of the 37 appeals reported by Judge Moore to have been vacated and remanded pursuant to Arthrex, I am not aware of any mandates reaching the PTAB. As these may have been held by the Fed. Cir. pending the rehearing requests in Arthrex, those mandates may start issuing. If they do, parties facing a remand to the PTO should study the PTAB's Standard Operating Procedure (SOP) 9, which outlines the Board's procedures for remand proceedings, including whether additional briefing, evidence, and/or argument will be allowed. As with all other Fed. Cir. remands, the PTAB is not required to reopen the record or permit new briefing during an Arthrex remand. However, during the initial conference call with the Board, patent owners should be prepared to explain to the new panel why serious issues impacting the original panel's final written decision—e.g. erroneous claim interpretations, failure to consider all of the evidence, erroneous legal positions, lack of due process, and/or improper consideration of party arguments—warrants additional briefing or the introduction of new evidence.

The chart below from SOP 9 reflects the likelihood of the Board permitting additional briefing, evidence, or oral argument for various types of issues addressed on remand. As is clear from the chart, while the PTAB may order additional briefing in certain scenarios, requests for additional evidence and/or argument will not be granted with much frequency. 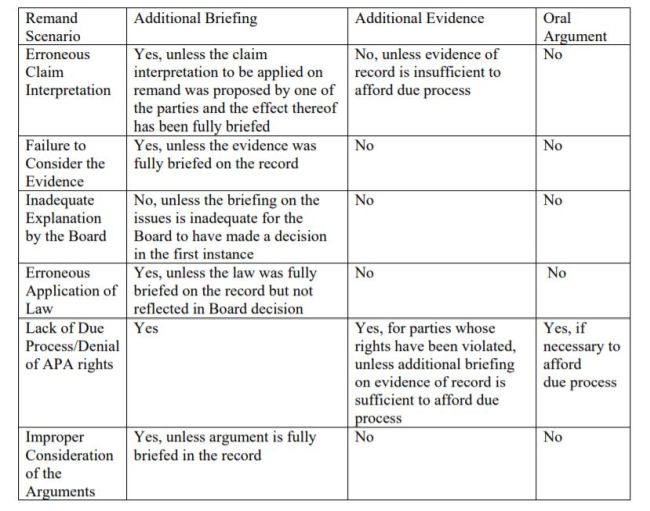