In April, Chief Judge Colm F. Connolly of the District of Delaware posted several new standing orders, a pair of which deals a serious one-two blow to parties that might wish to keep any funding arrangements and their corporate control under wraps. A first such standing order requires litigants to disclose certain details related to nonrecourse funding arrangements with third parties, while a second will require, for example, an LLC plaintiff to list all of its members—and that is just the beginning. A similar local rule imposed in New Jersey last year, related just to third-party litigation funding disclosure, made headlines, but given the relatively high number of patent cases filed in Delaware, Judge Connolly's set of new orders has the potential to make waves.

...[W]here a party has made arrangements to receive from a person or entity that is not a party (a "Third-Party Funder") funding for some or all of the party's attorney fees and/or expenses to litigate this action on a non-recourse basis in exchange for (1) a financial interest that is contingent upon the results of the litigation or (2) a non-monetary result that is not in the nature of a personal loan, bank loan, or insurance:

The required information must be disclosed via a statement filed within 30 days of an initial pleading or transfer to Delaware, including the removal of a state action. Further, per the standing order,

[p]arties may seek additional discovery of the terms of a party's arrangement with any Third-Party Funder upon a showing that the Third-Party Funder has authority to make material litigation decisions or settlement decisions, the interests of any funded parties or the class (if applicable) are not being promoted or protected by the arrangement, conflicts of interest exist as a result of the arrangement, or other such good cause exists.

Judge Connolly issued two additional standing orders this week as well, including one requiring parties that are "nongovernmental joint ventures, limited liability corporations, partnerships or limited liability partnerships" to include in disclosure statements "the name of every owner, member and partner of the party, proceeding up the chain of ownership until the name of every individual and corporation with a direct or indirect interest in the party has been identified". A third standing order issued on April 18 relates to disclosure of citizenship of organizational entities in diversity cases.

However, Delaware held a close second place throughout 2021 for overall litigation and NPE filings—and top billing for operating company litigation. While this week's news could dissuade some NPEs from filing in the District of Delaware in the future, the venue again proved relatively popular in Q1 2022. As recently reported in RPX's Q1 in Review and as illustrated below, during the first quarter of 2022, Delaware again held a close second place for overall litigation (first column, in grey) and NPE filings (second column, orange), and the district took the number-one spot for operating company litigation (third column, in blue). 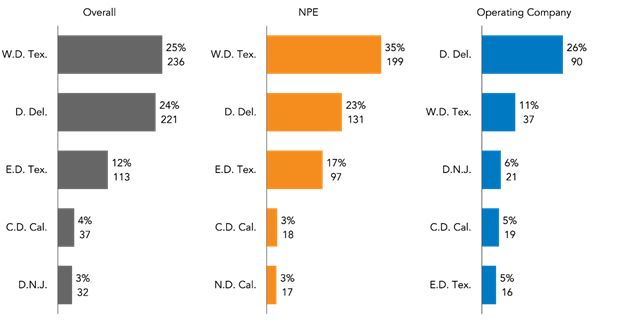 RPX's Q1 in Review also identified Judge Connolly of Delaware as a popular judge for overall (i.e., NPE and operating company) patent litigation, placing him in third place, just behind Judge Rodney Gilstrap of the Eastern District of Texas. 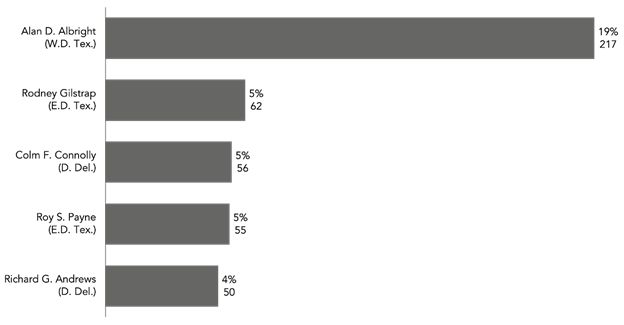 At present, the District of Delaware has two other active judges besides Judge Connolly, Judges Richard G. Andrews and Judge Maryellen Noreika. District Judge Leonard P. Stark has yet to be replaced after his recent confirmation to join the Federal Circuit. Given an increased likelihood of assignment to Judge Connolly, a future drop in popularity looks likely for the District of Delaware, particularly among NPEs that prefer to keep their sources of capital confidential (either at the behest of those sources or for their own reasons). When possible, those NPEs may continue to file in the Eastern and Western Districts of Texas, the disclosure requirements of which are comparatively meager. More difficult to predict: Where will NPEs file if Texas is not a viable venue option and Delaware is unattractive?

While apparently the venue of choice for some patent plaintiffs in Q1 (see venue graphic above), New Jersey is an unlikely venue choice for NPEs that wish to keep their funding under wraps. As noted, last year, New Jersey District Court Chief Judge Freda Wolfson issued an order amending local rules to require litigants to disclose information regarding nonrecourse litigation funding. Litigants in New Jersey federal court must now disclose, within 30 days of filing an initial pleading or the transfer of a case to the district, the identity of their funder(s), including their name, address, and if a legal entity, its place of formation; whether the funder's approval is necessary for litigation decisions or settlement decisions in the action—and if the answer is in the affirmative, the nature of the terms and conditions relating to that approval; and a brief description of the nature of the financial interest.

In addition, New Jersey litigants may seek additional discovery of the terms of any such litigation funding agreement "upon a showing of good cause that the non-party has authority to make material litigation decisions or settlement decisions, the interests of parties or the class (if applicable) are not being promoted or protected, or conflicts of interest exist, or such other disclosure is necessary to any issue in the case".

In coverage of New Jersey's amended local rule, RPX pointed to a survey of federal and state disclosure rules regarding litigation funding, published in 2018 by the Federal Judicial Center (FJC) at the request of the federal Advisory Committee on Civil Rules, indicated that "roughly half of all federal circuit courts and a quarter of all federal district courts require disclosure of the identity of (some) litigation funders for judicial recusal and disqualification purposes, indicating that such information is relevant for the just determination of a civil action by a neutral decision-maker".

Those districts include the Northern and Central Districts of California, both of which landed on RPX's ranking of the top patent litigation districts in Q1. By standing order, the Northern District requires litigants to file a "Certification of Interested Entities or Persons" disclosing "any persons, associations of persons, firms, partnerships, corporations (including parent corporations), or other entities other than the parties themselves known by the party to have either: (i) a financial interest of any kind in the subject matter in controversy or in a party to the proceeding; or (ii) any other kind of interest that could be substantially affected by the outcome of the proceeding".

The Central District of California requires parties to file a "Notice of Interested Parties", listing "all persons, associations of persons, firms, partnerships, and corporations (including parent corporations, clearly identified as such) that may have a pecuniary interest in the outcome of the case, including any insurance carrier that may be liable in whole or in part (directly or indirectly) for a judgment in the action or for the cost of defense".

That said, RPX frequently flags disclosures filed by NPEs in the Northern or Central Districts of California, among other districts, that neglect to report financial relationships that have been substantiated by RPX research into publicly available records. Still other plaintiffs opt to file a less stringent corporate disclosure statement (with respect to corporate parents and significant public company ownership stakes); this appears to be a popular route for NPE plaintiffs filing in the Northern District of Texas, which requires litigants to file certificates of interested parties.

While some plaintiffs attempt to skirt disclosure requirements, others request to file their disclosures under seal or ask the court to review them in camera, as the ostensible purpose of these filings, in at least some districts, is for the court to assess conflicts—not for the public to understand who might be behind certain litigation. When a plaintiff does so, any behind-the-scenes relationships remain so: cloaked from the public, perhaps even the defendant(s).

It remains to be seen whether additional courts adopt such sweeping disclosure requirements, and time will tell whether the Delaware mandate will make a significant difference in the number of patent cases filed there. Meanwhile, all signs point to continued investor interest in patent litigation, including a steady stream of new third-party backed NPE campaigns filed in 2021 and early 2022. RPX members can get an exclusive look at some of those campaigns and their funders here.

For a look at third-party funding in the first quarter of this year, see RPX's recently published Q1 in Review, with additional reporting and analysis—including on the size and growth of the US litigation finance industry—available to RPX members in an on-demand webinar.