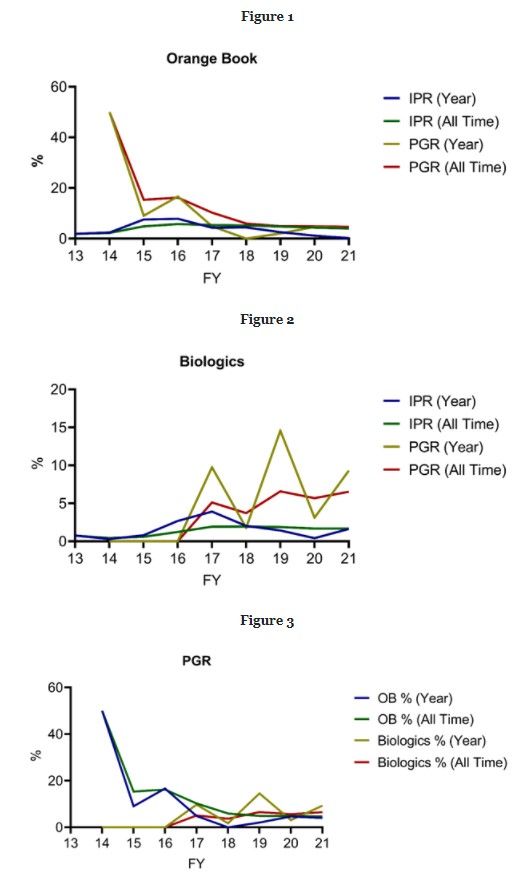 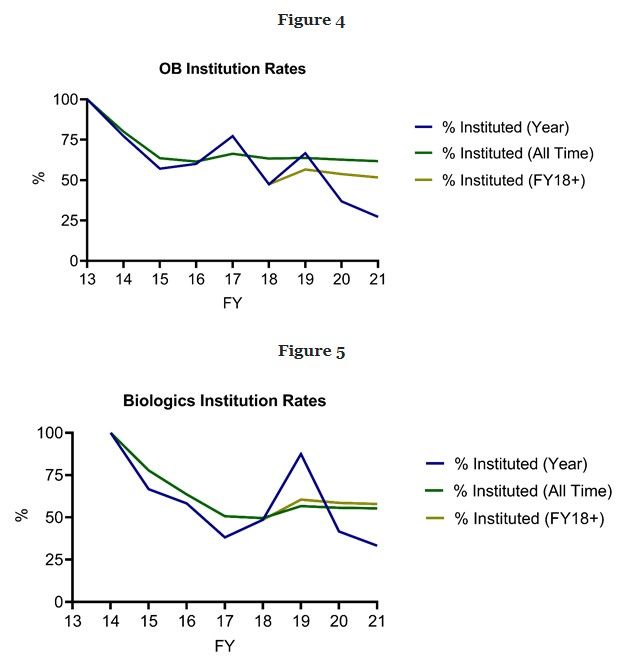 These outcome differences may reflect the broader array of claims challenged in biologic patents, which, unlike Orange Book-listed patents, may cover metabolites, manufacturing methods, and packing. Illustratively, a prior analysis indicated that process and manufacture patents had the highest rate of instituted claims canceled (69%) among patent categories considered for IPR/PGR petitions filed on patents in Art Unit 1600 through May 31, 2019.3 Process and manufacture patents play a more significant role in biosimilar litigation than ANDA litigation as these patents may be asserted as part of BPCIA proceedings.

Strategy divergence may also explain some of these outcome differences. Settlement rates were higher for petitions challenging Orange Book-listed patents (23%) compared to biologic petitions (18%), although the settlement gap was smaller on a patent basis (16% for OB patents vs. 13% for biologic patents). Intriguingly, based on data presented in the 2018 Orange Book patent study report, settlement rates for petitions challenging Orange Book-listed patents have declined from 25% (68 of 268 outcomes) between Sept. 16, 2012, and Sept. 30, 2017, to 19% between Oct. 1, 2017, and June 30, 2021 (30 of 158 outcomes), possibly reflecting falling institution rates and generally favorable claim survival rates over the past nine years of AIA post-grant proceedings.

Although every patent and petition is unique, the 2021 Orange Book patent/biologic patent study report highlights trends that may assist both petitioners and patent owners in developing strategies for challenging and defending Orange Book-listed and biologic patents before the PTAB. Notably, biologic patent owners should be wary of a potential increase in PGR challenges going forward, as well as the relative disadvantage faced by biologic patent claims following institution. This disadvantage may be compounded in the PGR setting in view of the increased number of available unpatentability grounds, including Section 101 (subject matter eligibility) and Section 112 (written description) grounds. Moreover, biologic patent owners may see an increase in parallel district court litigation/PTAB challenges as the FDA begins to publish reference product sponsors' biologic patent lists from BPCIA litigation in the Purple Book. These public patent lists, which were maintained under strict confidentiality prior to the passage of the Biological Product Patent Transparency Act in December 2020, may provide potential biosimilar applicants new insights into the patents that could be asserted against them in future litigation, as well as increased motivation to challenge such patents before the PTAB before seeking regulatory approval.