United States: No Unpatentability In A Successful Motion To Amend

The drug at issue was JEVTANA® (cabazitaxel), which is indicated for use in combination with prednisone for the treatment of patients with metastatic castration-resistant prostate cancer. Mylan challenged claims 1-5 and 7-30 of Orange Book-listed U.S. Pat. No. 8,927,592 ("the '592 patent") as unpatentable under 35 U.S.C. § 103(a). The '592 patent, along with two continuation patents that issued from it, moved the patent expiration date for JEVTANA® out about five years beyond the other Orange Book-listed patents. This can be seen from the present Orange Book report on cabazitaxel:

In addition, the 2030 expiration date of the '592 patent is about 10 years after all regulatory exclusivity has expired:

Patent Owner appealed, and the Federal Circuit vacated PTAB's denial of Aventis' Motion to Amend and remanded back to the PTAB for further consideration. Sanofi Mature IP v. Mylan Labs. Ltd., 757 F. App'x 988, 989 (Fed. Cir. 2019). According to the Federal Circuit, remand was appropriate in light of the decision in Aqua Products, Inc. v. Matal, 872 F.3d 1290 (Fed. Cir. 2017) (en banc), because the PTAB improperly placed the burden of proof on Aventis to establish that its proposed claims were patentable. In addition, according to the Federal Circuit, the PTAB incorrectly held that the preamble of proposed claim 31 should not be treated as a limitation. That incorrect claim construction led the PTAB to reject Aventis' arguments of non-obviousness.

Proposed Claims 31-34, showing the changes from original claim 27, are reproduced below:

32. (substantively identical to original claim 28) The method according to claim 31, where the cabazitaxel, or hydrate or solvate thereof, is administered at a dose of 25 mg/m2.

33. The method according to claim 31, comprising repeating the administration of said antihistamine, said corticoid, said H2 antagonist, and said cabazitaxel, or hydrate or solvate thereof, as a new cycle every 3 weeks.

34. (substantively identical to original claim 30) The method according to claim 31, where the cabazitaxel, or hydrate or solvate thereof, is administered at a dose of 20 mg/m2.

On remand the PTAB only reconsidered Patent Owner's Motion to Amend and treated the preamble language "increasing survival" of claim 31 as a limitation. The PTAB stated:

Applying that standard, the PTAB concluded that Petitioner (bearing the burden of persuasion post-Aqua Products) did not establish that the proposed substitute claims would have been obvious. The preponderance of evidence did not support Petitioner's position that a POSITA would have reasonably expected that administering cabazitaxel would increase survival of the claimed castration resistant or hormone refractory, metastatic prostate cancer patients that had progressed during or after treatment with docetaxel. Id. at *15. At best, a POSITA would have expected anti-cancer activity and hoped for, but not expected, increased survival. Id. at *16.

In reaching this conclusion, the PTAB highlighted testimony from Patent Owner's expert, Dr. Sartor, that the results of the relevant clinical trial "surprised, delighted, [and] shocked him." Id. at *18. The PTAB further noted that Petitioner's expert, Dr. Seth, also provided evidence of no reasonable expectation of success. In particular, in response to a question about whether a person of ordinary skill in the art "would expect" an increase in survival, Dr. Seth responded that the person of ordinary skill in the art merely "would hope" to see such a result. Id. at *19.

The PTAB highlighted that there was significant evidence of record to establish that those skilled in the art knew that the indications of disease control do not always correlate with increased survival. And the PTAB buttressed that conclusion by examining clinical results from the prior art:

The PTAB also gave weight to evidence of skepticism regarding the relevant clinical trial. Petitioner's expert, Dr. Sartor, testified that: "it was a challenge to get the [TROPIC] study off the ground" because "some thought there was insufficient data with cabazitaxel in prostate cancer to safely move forward with a phase III study." Furthermore, Dr. Sartor proffered that when the results of the relevant clinical trial were announced, "[p]ractitioners who had been aware of the existence of the study were surprised by the results." Id. at *22.

After weighing the evidence, the PTAB found no reasonable expectation of success of arriving at the invention recited in the proposed substitute claims. Hence, the claims would not have been obvious.

Lack of Anticipation Based on Public Use

Petitioner also asserted that proposed substitute claims were anticipated by a public use of the claimed methods in the relevant clinical trials. Id. at *22. Patent Owner countered by urging that the proposed claims were not subject to the public use bar at the time of the clinical trials because "there is no evidence indicating that anyone involved with TROPIC (including the inventor) had determined that the claimed methods would work for their intended purpose." Id. at *22-23.

Petitioner's anticipation argument was rejected by the Board. The PTAB noted that the alleged public use was a clinical study and that the evidence of record did not support a finding that the subject matter of the proposed substitute claims was ready for patenting at the time of the study. "The existence of a phase III study to determine whether the claimed treatment method would achieve the intended purpose is strong evidence that the inventor had not yet determined that the invention would work for its intended purpose." Id. at *24. Moreover, the Board noted that there was no disclosure of any of the premedication steps in the proposed claims. Id. at *25.

The Claimed Subject Matter Was Patent-Eligible

This case is also noteworthy because Petitioner raised the specter of lack of subject matter eligibility under 35 U.S.C. §101. Id. at *25. However, the PTAB rejected Petitioner's §101 arguments. Under Step 2A of the Mayo/Alice two-step subject matter eligibility test, the Board noted that the proposed substitute claims recite an abstract idea (a mental process). Specifically, the PTAB found that "a method of increasing survival" recites an intentional purpose performed mentally and was an abstract idea. Id. at *28. But the PTAB found that under Vanda Pharms. Inc. v. West-Ward Pharms., 887 F.3d 1117, 1134 (Fed. Cir. 2018), "[w]hen a claim integrates a mental process step into a method of treatment, that claim is not directed to an abstract idea." Id. at *29. In other words, even having found that the claims recite a mental process, the PTAB concluded the process was incorporated into a practical application that was eligible for patent protection.

Although the rate of granting proposed substitute claims is higher now than it used to be (15% on a per claim basis as of Nov. 30, 2020, compared to 4% in December 2017), it is still rare for a Patent Owner to have a Motion to Amend granted. And that is true, even considering the post-Aqua Products shift of the burden to the Petitioner to show unpatentability rather than resting on the Patent Owner to show patentability. 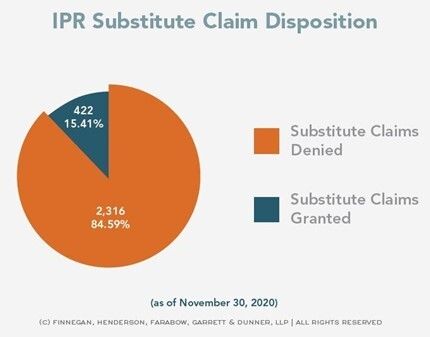 Moving beyond these statistics, this PTAB decision provides an example of different outcomes depending on whether the claim preamble is construed as a limitation. Also, when clinical trials are applied as prior art, the PTAB gives useful guidance as to how to defeat public use based on the existence of the trials at a relevant time. This is a key consideration for innovative pharmaceutical companies. And finally, amidst the great uncertainty of subject matter eligibility under 35 USC §101, the decision provides an example of successfully arguing subject matter eligibility, even if the claims recite a mental process, which is a type of abstract idea, as long as the process is incorporated into a practical application a la Vanda.