United States: FDA User Fee Reauthorization Legislation Continues To Simmer In Congress: What's At Stake And What It Means For September

As outlined in Akin Gump's previous analysis, the current five-year authorization of the Food and Drug Administration (FDA) user fee programs for branded/reference drugs and biologics, medical devices, generic drugs, and biosimilars is set to expire on September 30, 2022. Unlike past reauthorization cycles in which Congress passed the user fee reauthorization package earlier in the summer, Congress did not pass the reauthorization package prior to adjourning for August recess. This alert provides an update on the status of congressional deliberations, policy reforms that are under consideration, and the steps ahead.

Over the course of this year, Congress has been considering the details of the FDA user fee reauthorization legislation, including the user fee program recommendations that the Secretary of Health and Human Services (HHS) shared with Congress earlier this year as well as other potential FDA-related reforms. On June 8, the House of Representatives passed its FDA user fee reauthorization bill (H.R. 7667, the Food and Drug Amendments of 2022) by a bipartisan vote of 392 to 28. Less than a week later, on June 14, the Senate Health, Education, Labor and Pensions (HELP) Committee approved S. 4348, the Food and Drug Administration Safety and Landmark Advancements (FDASLA) Act, by a bipartisan vote of 13 to 9. These key milestones in the legislative process set the stage for the "four corners"—the chairs and ranking members of the Senate HELP Committee and the House Energy and Commerce Committee—to negotiate and move a final package ahead of the September 30 deadline, thereby avoiding any disruption to these critical programs.

At this time, the House and Senate have not yet announced a consensus package. The last time an FDA user fee reauthorization did not pass Congress before an August recess was in 2007. Since the House passage of H.R. 7667 and Senate HELP Committee action on S. 4348, last month, Senator Burr also introduced the Food and Drug Administration Simple Reauthorization Act (S. 4535)—an alternative reauthorization bill that would simply reauthorize the user fee programs based on the recommendations from the Secretary, and without any substantive policy riders. The following chart highlights noteworthy provisions included in each reauthorization bill. 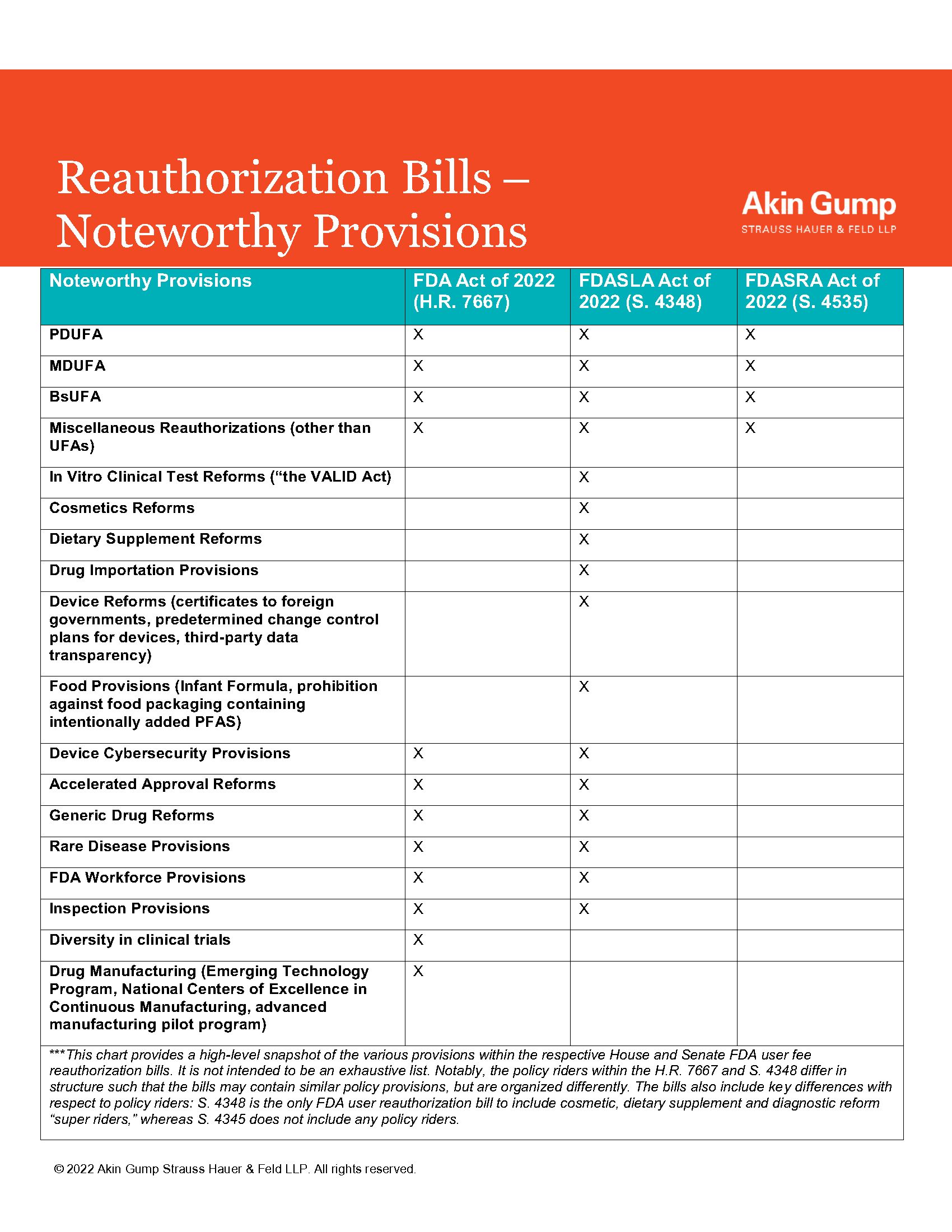 What's Next? Timeline and Outlook

The current five-year user fee reauthorization is set to expire on September 30. So far, FDA has refrained from issuing "reduction in force" notices to employees in positions funded by these user fees programs. FDA Commissioner Robert Califf has indicated that the PDUFA program has enough carryover funds to cover five weeks into the next fiscal year and that the agency is seeking "reasonable assurance" from Congress that it will act soon on reauthorization legislation.

Whether or not the House and Senate announce a consensus package in the coming weeks, there will be increasing pressure for Congress to pass some sort of reauthorization legislation in September to reauthorize the programs and minimize potential disruption to the agency's user fee funded activities. If there is not a "reasonable assurance" of passage, at some point in September FDA will likely proceed with preparing for a potential wind down of these user fee programs—even if reauthorization ultimately remains likely. These preparations will only sharpen the focus on a September reauthorization exercise. In the event that Congress moves a smaller reauthorization package, it could set the stage for some policy riders that do not move in September to be revisited in a lame duck Congress. For example, the Senate HELP Committee included FDA-related reforms in their bipartisan PREVENT Pandemics Act and it remains unclear whether Congress might package some of these reforms with other FDA legislation, whether with the reauthorization of the expiring user fee programs or some other legislative vehicle.

While there is significant uncertainty regarding the timing and scope of this reauthorization, and in particular, whether it will contain the "super riders" addressing cosmetic, dietary supplement, and in vitro clinical test regulation, there is no doubt that there remains a high degree of interest on and off the Hill regarding these provisions and a strong desire to reauthorize these programs in a timely manner. Once again, FDA issues are poised to take center stage when Congress returns in September.