Prior to FIRRMA, CFIUS had jurisdiction to review foreign investments in US real estate only in connection with foreign acquisitions of control over a US business. FIRRMA expanded CFIUS's jurisdiction to include certain transactions involving the purchase or lease by, or a concession to, a foreign person of certain real estate in the United States, even where there is no accompanying investment in a US business. Under the proposed rules, these transactions are termed "covered real estate transactions," and consist of the purchase, lease or concession to, a foreign party of "covered real estate." There are two categories of "covered real estate": (i) real estate that "is located within, or will function as part of, an air or maritime port," and (ii) real estate near US military installations or other property owned by the US government that "is sensitive for reasons relating to national security."

The proposed real estate rules are open for public comment through October 17, 2019, which provides a very short period of time for public input. Below we describe key elements of the proposed rules on which interested parties may wish to submit comments.

What is the Proposed Scope of "Covered Real Estate Transactions"?

These rights are deemed to exist "whether or not shared concurrently" with another party. Thus, an otherwise covered real estate transaction will still be subject to CFIUS review even if it results in a US party holding title jointly with a foreign party as long as the foreign party is afforded at least three of the above fundamental property rights as a consequence of joint ownership.

Covered Real Estate. FIRRMA's expansion of CFIUS' jurisdiction with respect to investments in real estate is limited to real estate in or around specific sites—certain airports, maritime ports, military installations, and other "sensitive" properties owned by the US government. These sites are divided into two categories. The new rules contain specific provisions and definitions for each: 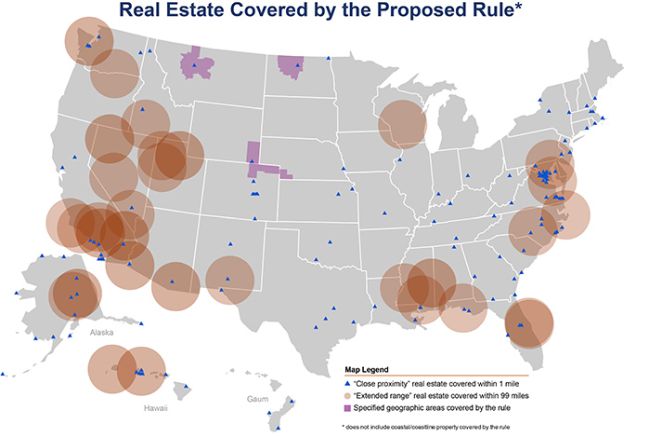 The proposed rules include a list of military installations and other qualifying US government property and their corresponding vicinity restrictions in an appendix.4 The properties identified on this list, as well as any added in the final rules, will materially delineate the scope of CFIUS' review of foreign investments in US real estate.

As discussed in our initial Advisory on FIRRMA,5 the statute significantly enhanced CFIUS' role in protecting national security by making filings with CFIUS mandatory with respect to certain foreign investments in US businesses. Covered real estate transactions, however, are not subject to that mandate. Thus, whether to submit a filing with CFIUS regarding a covered real estate transaction is a matter of discretion for the parties (absent a specific request from CFIUS for a submission).

Although parties to covered real estate transactions are not required to make any filing with CFIUS, if they choose to do so, the proposed rules give them the option to file a short-form "declaration" rather than the longer, traditional form of "notice." This may be an attractive option for some parties, particularly as CFIUS is required to complete its review of a declaration within 30 days (as compared to the longer 45-day period for review of notices). However, CFIUS can request, after reviewing a declaration, that the parties submit a full notice, so parties to covered real estate transactions may want to weigh the benefits and drawbacks of simply filing a notice as an initial matter, depending on the nature of their transaction and the timing of its planned closing.

To avoid potential classification issues, the proposed rules clarify that a covered "control over a business" transaction involving the purchase, lease, or concession of covered real estate is not considered a "covered real estate transaction," and parties to such "control" transactions should follow the filing procedures set forth in 31 C.F.R. part 800. Although FIRRMA gave CFIUS authority to impose fees for making filings regarding both types of transactions, the proposed rules do not include provisions regarding such fees. According to the proposed rules' preamble, the Department of the Treasury intends to publish a separate rule regarding fees at a later date.

Consistent with CFIUS existing rules, the proposed rules also set out significant penalties to be imposed under the new 31 C.F.R. part 802. Like the rules governing other covered transactions in part 800, the proposed rules on covered real estate transactions would establish penalties up to $250,000 per violation for parties who make a "material misstatement or omission" in a declaration or notice or otherwise make a false certification.

The proposed rules also include many explanations and examples, too detailed to summarize here, that reveal much about how CFIUS intends to define its newly delineated oversight. As noted, interested stakeholders have less than one month, until October 17, 2019, to provide comments on these proposed rules.

* Trevor Schmitt contributed to this Advisory. Mr. Schmitt is a graduate of Georgetown University Law Center and is employed at Arnold & Porter's Washington, DC office. He is not admitted to the practice of law in Washington, DC.