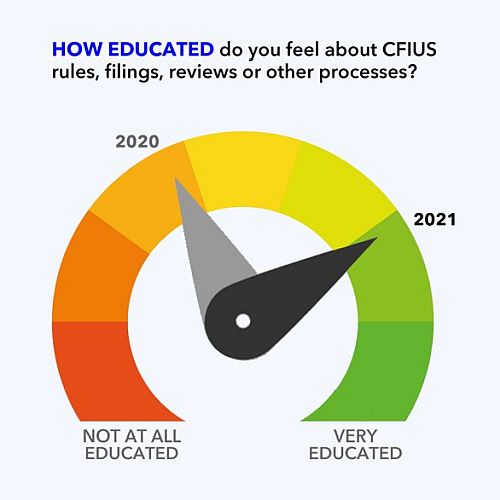 The second annual survey, conducted during the month of June, 2021, was created to help executives understand how they compare to their peers when it comes to compliance with FIRRMA and preparedness for CFIUS. The survey was

The first part of our survey was aimed at respondents that may need to file with (or respond to) CFIUS, including corporate executives, foreign investors, and other entities that may be directly impacted by FIRRMA.

First, we asked how "educated" these executives felt about CFIUS requirements, expectations, or filing processes. On a scale of one to ten, with ten being "very educated," the average response was 7.29.

According to Olga Torres of Torres Law, there is a "much higher awareness regarding CFIUS, even in industries that generally would not have been worried about CFIUS in the past."

The former General Counsel of the Office of the U.S. Trade Representative, Mendenhall adds that the Committee has been increasingly active, "rapidly expanding its staff and proactively looking for investments to review." That's helped fuel comprehension of the Committee and its mandate, as concerns over CFIUS risks have had a "profound impact on investment structures, sourcing of capital, IPO decisions, and other strategic planning decisions."

At the same time, general knowledge does not necessarily equal preparation. "Awareness of CFIUS may be on a modest upswing," says Thomas Feddo, who served as the first Assistant Secretary for Investment Security at the U.S. Treasury, "but I'm not at all convinced that deal parties, funds, and investment banks comprehensively recognize and are completely prepared for the scope of the Committee's inquiries, or the extent of its national security authorities."

According to Feddo, it's not uncommon that very bright and knowledgeable parties find themselves unprepared when faced with CFIUS inquiries. "I've seen more

than a few companies, and sometimes their counsel, caught flat-footed," he says.

That insight was also captured in the latest survey; in addition to general knowledge about CFIUS, we asked executives if they felt "prepared" to deal with CFIUS filing requirements or inquiries from the Committee. On a scale of one to ten, with ten being "very prepared," the average response was 7.57. That's a 105% increase over last year's survey, when the average response was only 3.7.

Since the survey captured subjective opinions, it's impossible to baseline the data or draw broad conclusions. "One person's 9 is another person's 7, so we have to be careful with this survey," said one former Treasury official. "However, it certainly does appear that [respondents] are feeling more knowledgeable and prepared than last year, which is probably a positive development."

That may be, in part, due to confidence with outside counsel, and their ability to assist with CFIUS matters. To wit, we asked executives how prepared their outside counsel was to help them with CFIUS rules, filings, inquiries, reviews, or other processes. On a scale of one to ten, with ten being "very prepared," the

Echoing the warnings of former CFIUS head Thomas Feddo, Olga Torres cautions that the sense of preparedness varies widely between established companies that have dealt with the Committee in the past, and those that have not had experience with CFIUS. "Yes, they are generally more aware of CFIUS," she says, "but we are still doing a lot of hand holding in the sense of managing expectations regarding the work involved, the number of months the review often takes, and the manpower and resources associated with the reviews."

We asked law firm partners how "educated" their clients were about CFIUS rules, filings or reviews ("clients" were defined as corporations, foreign investors, or others whose transactions might fall under CFIUS jurisdiction).

On a scale of one to ten, with ten being "very knowledgeable," the average response was 5.38. That's almost identical to last year's number of about five, which implies that outside counsel doesn't believe their clients are more informed when it comes to CFIUS.

Lawyers who spoke to Foreign Investment Watch about the data were not surprised by the results. "I think that's to be expected," said one law firm partner who has been involved in hundreds of CFIUS reviews. "It's the client's job to run their business, and it's counsel's job to help them manage the risks," she says. "I wouldn't expect them to know more about CFIUS or OFAC [Office of Foreign Assets Control] or any other regulatory framework than I do."

Another lawyer who asked to remain anonymous was more humorous in his analysis of the data. "Don't all lawyers think we're smarter than our clients?"

In fact, the data support that quip as well, with outside counsel scoring themselves very high on their level of preparedness to assist their clients. On a scale of one to 10, with ten being "very prepared," the average response was 8.87, almost identical to last year. "We generally think pretty highly of ourselves," laughed that same lawyer. 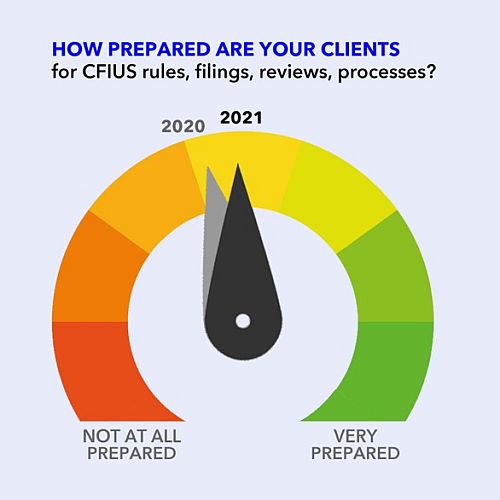 When asked how "prepared" their clients were for CFIUS, again outside counsel was not so confident. On a scale of one to ten, with ten being "very prepared," the average response was only 4.97. That's only a moderate improvement from the 2020 average of 4.4.

"I don't think this is ignorance among our client base," says one global M&A lawyer, "I think it's just the reality of the global markets." Noting that M&A has been hampered by the pandemic, she believes that corporate preparedness numbers will continue to improve over time. "Once we start seeing more deal making and transactions, there's going to be a broader necessity to comply," she says, "and I suspect these preparedness numbers will slowly start to creep up.