United States: Would You Buy A Used Car From This Man?

A recently-filed Daubert motion in a class action suit against an auto insurance company showed that "expert" testimony on the value of damaged cars repaired like new just didn't add up.

You can polish a red 2020 SUV until it shines like it's showroom new. But if it's been in a collision and repaired like new, how much is that SUV worth in resale value?

That is the underlying question in a class action suit against a major auto insurance company. A Daubert motion in this matter seeks to exclude testimony of a self-proclaimed auto appraiser hired by the plaintiffs. As an FTI Consulting statistics expert retained by the defense in the motion showed, offering testimony based on speculation and arbitrary data is like driving a car with the gas gauge hovering on E. You're not going to get very far.

Precise data and sophisticated statistical analysis are the way to go.

The case at hand begins with a suit filed in Georgia by plaintiffs claiming that the insurer had underpaid for the so-called "diminished value" of their repaired vehicles. Diminished value is the difference between what a car was worth before damage and the fair market value after repair. Since car buyers are often reluctant to pay as much for a previously-damaged car - even a red 2020 SUV repaired to showroom new - the diminished value can make up the difference.

How is diminished value determined? In this instance, the insurance company used a formula prescribed in a Georgia court case in 2001 as an agreed-upon starting point. Depending on the individual policyholder, the insurer might also factor in information collected from the policyholder with additional input drawn from market research and independent appraisers as needed, among other inputs.

The plaintiff's appraiser, on the other hand, presented an idiosyncratic methodology developed during 16 years on the job. That methodology originally involved calling used car dealers or sales managers and describing the vehicle and damage, followed by questions about how much the dealer would pay for a trade-in on the vehicle.

The appraiser now uses estimates and information about the vehicles from the owners themselves, including mileage and repair estimates. At times, in lieu of on-site inspections, he relies on photographs of the vehicles. Then he considers the National Auto Dealers Association (NADA) retail value of the car, plus assesses damage and applies his own methodology to come up with a diminished value.

In the Daubert motion, the FTI Consulting statistics expert poked holes in the appraiser's methodology large enough to drive a truck through.

Numbers Speak for Themselves

In the first of two reports, the appraiser stated that the court-prescribed formula was flawed and proposed his own modification, offering a formula based on 20 "randomly selected" claims in his files. In a rebuttal report, he revealed the claims were not randomly selected, but simply 20 he found, and in an attempt to cure this flaw, reasserted his opinion from his original report with analysis of 51 claims.

Hired to evaluate the appraiser's original report, the FTI expert looked at the formula modification offered by the appraiser based on the 20 claims. FTI performed standard statistical tests to determine whether the 20 were representative of the claims associated with the proposed class of vehicles in the plaintiffs' complaint.

FTI's conclusion: On average, the samples had higher repair costs, lower mileage, later model years, and over-represented the luxury vehicle class than the proposed class claims in the complaint.

Based on the reasons above, and others (as shown in the infographic that follows), FTI found that the sample that the appraiser used to determine his formula was highly flawed and tailored solely to the litigation and untethered to professional standards. That made it speculative and unreliable in the FTI expert's opinion. Essentially, the appraiser's formula was running on empty.

The infographic below provides more detail about the approach that FTI Consulting took to analyzing the available data and the appraiser's testimony. 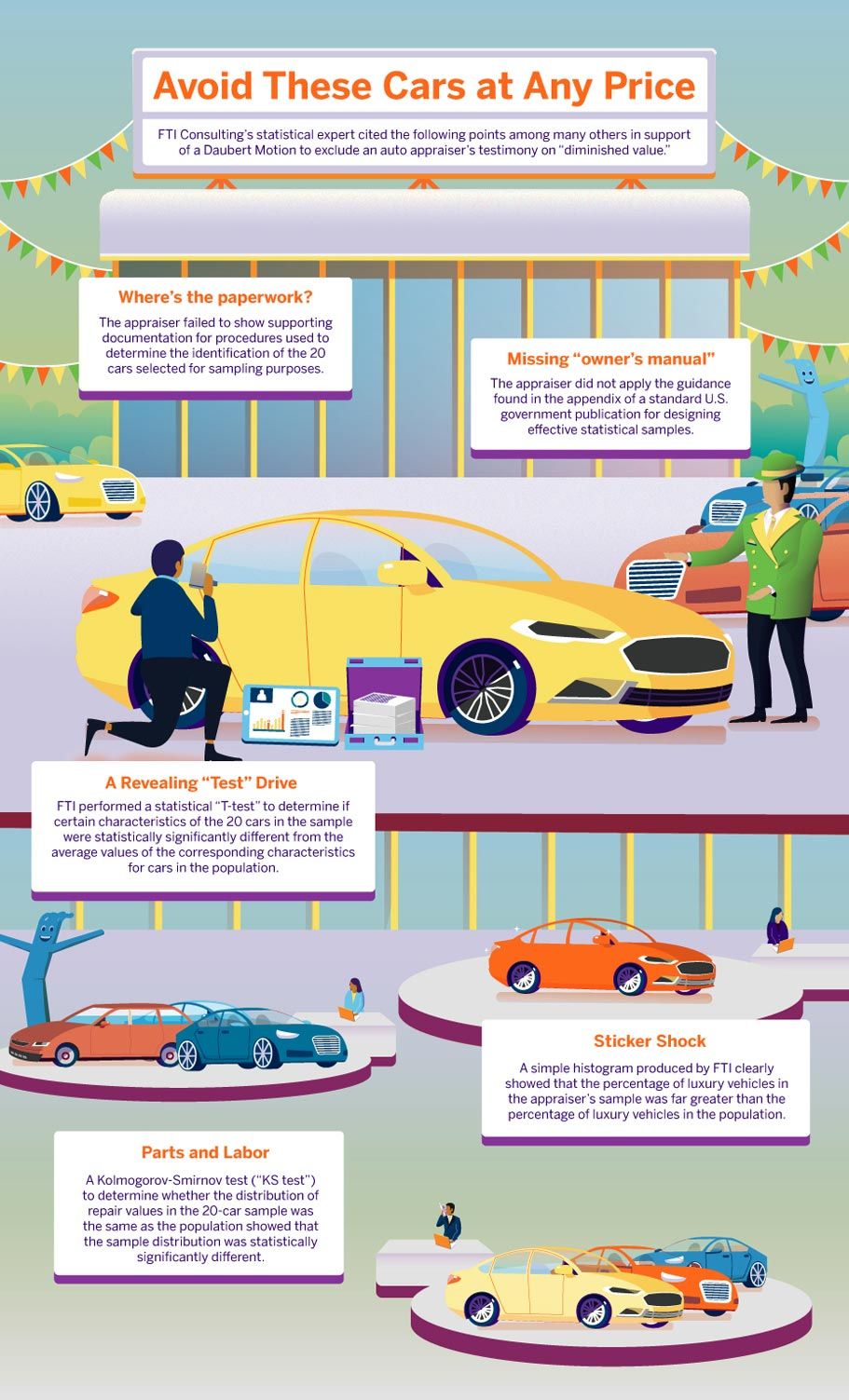