by Brian R. Chmiel, CPA and Brian Reilly, MBA, J.D.
Crowe Horwath LLP
To print this article, all you need is to be registered or login on Mondaq.com.

Legal, financial, and accounting advisers are dusting off the U.S. Bankruptcy Code and addressing the prospect of their clients and related entities becoming financially troubled or even insolvent. Authors Brian Reilly and Brian Chmiel highlight three bankruptcy preference issues to keep in mind when advising apparently viable companies. These issues, like potholes in the road, are often overlooked – that is, until the car's wheel plunges and the tire blows out.

In today's dire economic environment, the prospect of rapid deterioration of any company's top-line revenue, combined with increasingly cautious lenders, could quickly lead a firm – or the companies it deals with – to an unfamiliar position of financial distress. In this economy, even historically strong firms might face economic distress or be affected by the financial distress of its customers, vendors, suppliers, and traditional capital providers. The exhibit below illustrates the trend of steadily increasing commercial bankruptcies. Countless pundits believe that many more corporate bankruptcy filings will follow in subsequent quarters. 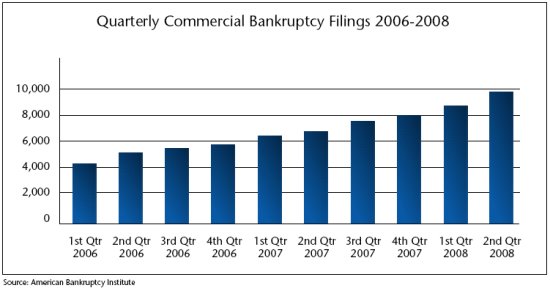 A proposal to modify or extend alternative payment terms or relationships can legitimately originate from any of the business entities interested in prolonging a historically effective business relationship. Regardless of who raises the possibility of a change in payment terms, the client might need advice that includes how to respond to an offer from a customer, vendor, or lender to change its terms. It might seem logical for a business to take action to improve its relative credit position with an entity that is in financial distress or even headed toward bankruptcy. However, modifying credit terms can backfire on the creditor, in the form of a preference or fraudulent transfer action, if the troubled entity subsequently files for bankruptcy. The creditor must balance its desire for more stringent credit terms or more collateral as security (because of the near-term perceived credit risk of the debtor) against the risk of a preference or fraudulent transfer action.1

1. The Nervous Customer: A New Offer For Cash On Delivery (COD) Payment

Company A is a longtime customer of Company B, a valued supplier of materials to Company A. Company A purchases Company B's product as a manufacturing input to its end product and is highly dependent on, and satisfied with, Company B's input product. Historically, Company A has paid promptly. Over the past six months, however, Company A has fallen behind in its trade payments to Company B. Company A has paid its monthly invoice for supplies only once in the past six months, and that was the most recent month's invoice. Company A is well past due on the net 30 day terms for the prior five months' invoices. Accordingly, Company B has booked receivables for each of the five invoices still unpaid, and has reduced its receivables for the most recent payment. This month, Company B agrees to ship another order under the new commitment from Company A that the new invoice amount will be paid in full, COD. Upon receipt of the COD payment, Company B applies the payment to the first of its five-month-old invoiced receivables in order to reduce its days sales outstanding (DSO) statistic.2 Two months later, Company A files for bankruptcy protection.

On its face, COD might seem to be the simplest practical cure for payment delinquencies with a currently troubled but historically valuable customer. This commonsense approach, however, could hit a preference pothole: The introduction of new COD terms could be construed later as being outside the ordinary course of business dealing between the two companies, a situation that could affect the creditor's potential preference defenses.3 Moreover, Company B's accounting method for the COD cash receipt could also play a critical role in yet another potential preference action defense. It could be argued that since the COD payment was applied by Company B to the old invoice, the payment was no longer a contemporaneous exchange of new value (a typical preference defense) but instead was a payment for an antecedent debt (the six-month-old invoice).

Therefore, matching payments to the appropriate invoice appears not only to be good accounting practice but could also help to preserve a contemporaneous exchange of new value that would serve as a preference defense.4 In a troubled-company environment, care should be taken to preserve all invoice and payment documents in order to substantiate potential preference defenses.

2. The Nervous Bank: Compensating Balances and the Right of Setoff5

Bank C has a long-standing lending relationship with Company D, including a revolver facility collateralized by Company D's receivables. Company D has recently had difficulty collecting its receivables and has suffered significant write-downs of receivable balances due to financial distress and business failures in its traditional customer base. As a result, in violation of the revolver agreement, Company D has paid late and made partial payments. In light of the longtime business relationship, Bank C has decided not to terminate the facility immediately, but to avoid cancellation of the revolver it has required Company D to place a $1 million cash deposit with Bank C. Two months later, Company D files for bankruptcy protection.

At first glance, obtaining a $1 million cash deposit from a troubled company might not appear to have bankruptcy preference implications. However, a common-law concept codified in Bankruptcy Code Section 553 ultimately allows Bank C to impose an administrative freeze on the deposit account, allowing the creditor to control the cash at least on a temporary basis, often to the frustration of the debtor and other creditors. Bank C would be relying on its bank's right to setoff to hold the recent $1 million deposit against other money owed to it by Company D without fear of a preference action. A Supreme Court case decision, Citizens Bank of Maryland v. Strumpf, clarified that imposition of an administrative freeze does not violate the automatic stay typically implemented in bankruptcy proceedings.6

3. The Nervous Parent: Additional Security As Its Subsidiary Struggles

Company F is a wholly owned subsidiary of Parent E. During recent meetings and financial reviews, Parent E has determined that Company F is rapidly becoming financially distressed. Company F has said as much by asking Parent E for a $15 million infusion of cash to meet its short-term needs. In response to the request, Parent E provides a $15 million loan. Concurrently, Parent E establishes a security interest in assets of Company F. Within five months, Company F files for bankruptcy protection.

While it is economically rational for a parent company to want to memorialize its new financial support to its struggling subsidiary through a new loan and a new associated security interest, acting on this natural instinct could lead to a preference or fraudulent transfer action against the parent by the subsidiary's estate if the subsidiary later files for bankruptcy. Here the security interest granted by Company F to Parent E, while not a typical cash payment, may be considered a "transfer" nonetheless. Parent E might ultimately be characterized as having preferentially "improved its interest" through the transfer that occurred by securing its latest loan.7 This characterization could prevail by establishing that Parent E leapfrogged the unsecured creditors of Company F with its new security interest related to the loan, and thus likely falls under the greater interest test as codified in Section 547(b)(5) of the Bankruptcy Code. Importantly, Parent E, owing to its control of Company F, will likely be viewed as an insider under the code, therefore extending the period of time for preference analysis to one year.8

As is clear from this brief sketch of potential hidden potholes, attorneys, financial advisers, and corporate officials must be alert to steer clear of preference hazards. As the economy contracts, all parties need to consider how business relationships might change once one of the parties becomes a debtor in bankruptcy. Advisers should recognize that their clients, as well as their clients' customers, creditors, and other related business entities, can face severe financial consequences if these potholes are not considered before transactions are executed.

1. Legal commentators have opined on the rapidly changing landscape and case law involving attorney and/or accounting professional liability cases regarding the provision of legal and accounting advice to a debtor in the zone of insolvency. See Deborah J. Piazza and Jennifer Rando, "Is Anyone Safe?," Law. com, Nov. 13, 2008, www.law.com/jsp/article.jsp?id=1202426029502.

2. DSO is frequently expressed algebraically as accounts receivable divided by sales for a given quarter multiplied by 91 (the number of days in the quarter).

7. U.S.C. 11 §547(b)(5) generally provides that the "improvement position test" or "greater interest test" is one of the required elements of such an avoidable preferential transfer.

8. In addition, if fraud were alleged to be involved in the loan and the establishment of a security interest, such an outcome could prevail based on a theory of fairness and equity.