by Heather L. Frayre
Dickinson Wright PLLC
Your LinkedIn Connections
with the authors

In January 2021, United States Citizenship and Immigration Services (USCIS) issued new I-9 guidance regarding the completion of Form I-9 for certain employees working pursuant to the Deferred Action for Childhood Arrivals (DACA) Program. The new guidance specifically addresses the situation where an employee presents an unexpired Employment Authorization Document (EAD) with category code of C33 that was issued on or after July 28, 2020, along with an I-797 Extension Notice issued by USCIS that shows a one-year extension of their deferred action and work authorization under the DACA program.

The DACA program was initially created in 2012 based on an executive order signed by President Obama. It provides temporary relief from deportation and work authorization to certain undocumented individuals who arrived in the U.S. as children.

Since its inception, the program has been the subject of controversy. The last four years were no exception, as the Trump Administration repeatedly took steps to restrict and/or eliminate the program. In September 2017, the Department of Homeland Security (DHS) announced phased rescission of DACA. In a decision issued on June 18, 2020, the Supreme Court ultimately determined that the planned rescission did not comply with federal law. Notably, the Supreme Court decision took issue procedurally with how DACA was rescinded and did not opine on the policy or legality of the DACA program itself.

On July 28, 2020, then-Acting Secretary of Homeland Security Chad Wolf issued a memorandum (the "Wolf memo") calling for a review of the DACA program. As a result of the memo, USCIS began rejecting initial DACA requests and shortened EAD issuance from two years to one year. This gave rise to new litigation, and a U.S. district court found on December 4, 2020, that the Wolf memo was not enforceable because Secretary Wolf was not lawfully serving in his post, and the court directed DHS to take several steps in compliance with its order.

Due to the court order, USCIS updated its website on December 9, 2020, announcing, for example, that USCIS would:

Then, on January 4, 2021, USCIS announced the new I-9 guidance instructing employers on how to complete Form I-9 for individuals whose EADs were presumably shortened due to the Wolf memo.

How do I complete Form I-9 for individuals who present an unexpired C33 EAD issued on or after June 28, 2020, and I-797 Extension Notice?

DACA beneficiaries may present a valid EAD, an acceptable List A document for Form I-9 and subject to reverification. In some instances, an employee may also have an extension notices issued on Form I-797 extending the EAD validity from one year to two years.

If an employee presents an unexpired EAD with category code C33 that was issued on or after July 28, 2020, along with an I-797 Extension Notice issued by USCIS that shows a one-year extension of their deferred action and work authorization under DACA: 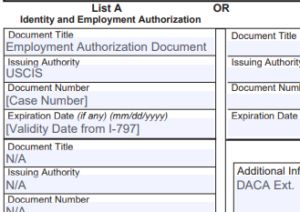 May I reverify employees who present this documentation to me, even if reverification is not yet due?

The USCIS announcement also notes that employers may reverify an employee before reverification is required if they present the same document combination (C33 EAD Card issued on or after June 28, 2020 and I-797 Extension Notice). The employer should complete Section 3 with the expiration date from the I-797 Extension Notice and write "DACA Ext." in the Additional Information field in Part 2.