The agency's rulemaking to implement the AIM Act will offer stakeholders opportunities to shape a new market-based mechanism to reduce HFCs.

Tucked inside the US$900 billion COVID-19 relief package signed into law on December 27, 2020, is a regulatory opportunity for the climate-focused Biden-Harris administration: the American Manufacturing and Innovation Act of 2020 (the AIM Act). The AIM Act requires the US Environmental Protection Agency (EPA) to develop an allowance trading system to aggressively phase down the production and consumption of certain chemical refrigerants, called hydrofluorocarbons (HFCs), throughout the United States.

In the 1980s, the Montreal Protocol, a universally ratified international treaty, resulted in a massive market shift away from the once globally dominant refrigerant chlorofluorocarbons (CFCs) towards HFCs. While HFCs have certain ozone-related benefits over CFCs, they present a distinct issue: HFCs are greenhouse gases (GHGs), often with Global Warming Potentials (GWP) hundreds, and in some instances, thousands of times more potent than that of carbon dioxide.

In 2016, the Kigali Amendment to the Montreal Protocol codified the effort to target HFCs, calling on countries to reduce the production of HFCs by 85% by 2036. While the US has not ratified the Amendment, President Biden's January 27, 2020 executive order directed the US State Department to develop the "transmittal package" seeking the Senate's advice and consent to ratify the Kigali Amendment. In the meantime, EPA is moving forward to implement the AIM Act.

The AIM Act: An Overview 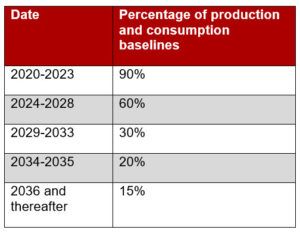 EPA may accelerate the phase-down in response to a petition from any person, beginning in 2025. EPA's determination on the petition must consider best available data and market conditions, such as substitute availability. The AIM Act gives EPA discretion to add substances to the regulated substances list or review and revise exchange values, taking into account factors outlined in the statute.

The AIM Act includes two central carveouts that protect "essential uses" of regulated substances and domestic manufacturing. First, the EPA Administrator may allocate a mandatory number of HFC allowances for a limited five-year period for end-uses that EPA designates as essential following a notice-and-comment rulemaking (the public may request such a designation by petitioning EPA). The AIM Act identifies a preliminary list of essential uses, such as defense sprays - which include pepper sprays used by law enforcement, asthma inhalers, and certain critical military uses - and directs EPA to review these specific end-uses every five years.

Second, the AIM Act includes a limited domestic manufacturing exception. The EPA Administrator may, subject to a notice-and-comment period, authorize persons to produce a regulated substance exceeding their number of allowances for a renewable period of five years if the production (1) is located at a facility in the US and (2) is solely for export to and use in another country with similar HFC limitations.

The AIM Act relies on four central mechanisms to phase down HFCs, including (1) data collection, (2) allowance trading, (3) sector-specific technology transitions, and (4) refrigerant management practices. Each of these mechanisms, as well as the rulemaking process itself, involves significant opportunities for public participation.

On February 11, 2021, EPA released a Notice of Data Availability (NODA) Relevant to the United States Hydrofluorocarbon Baselines and Mandatory Allocations. The NODA provides data on total annual HFC production and consumption from 2011 to 2013 as reported to EPA's Greenhouse Gas Reporting Program. EPA intends to rely on this data, as modified by stakeholder submissions, in developing production and consumption baseline data for forthcoming AIM Act regulation. The NODA also provides data and information on the statutorily identified preliminary list of essential uses, including trends of HFC consumption related to those applications. EPA seeks comment on potential data gaps and areas where additional information could improve the agency's data. The deadline for comments on the NODA is February 25, 2021.

Allowance trading is the AIM Act's central mechanism for HFC phase-down. Under the AIM Act, EPA must establish a national allowance-trading system for HFCs, relying on the applicable exchange values. The AIM Act directs EPA to issue a final rule phasing down HFCs and establishing the allowance-trading system on or before September 23, 2021, or no later than 270 days after passage of the AIM Act. Stakeholders can expect a proposed rule and public comment period this spring or early summer at the latest.

Like other cap-and-trade programs, a cap-and-trade program to phase down the production and consumption of HFCs will provide companies with flexibility to pursue the most efficient compliance path based on factors that are individual to that company. Companies that invest early in GHG reductions and quickly transition away from high-GWP HFCs will benefit through revenue gained by over-compliance. Companies that are further behind in developing alternatives will have the option to comply by purchasing allowances. Various aspects of the trading program design and rules will have a meaningful impact on industry; stakeholders should carefully review and comment on EPA's forthcoming proposal.

EPA may apply HFC restrictions to sectors or subsectors in which HFCs are employed through "negotiated rulemaking," a collaborative drafting process with stakeholders. The sector-specific provisions of the AIM Act include a petition mechanism, whereby a person may petition EPA to restrict the use of a regulated substance across a sector or subsector. Stakeholders should closely watch for any petitions or negotiated rulemakings for sector-specific restrictions to expedite the HFC phase-down in order to avoid surprises.

The AIM Act directs EPA to regulate the management of HFCs and their substitutes during equipment servicing, repair, and disposal, with the goal of "maximizing reclaiming and minimizing the release" of HFCs from equipment, excluding those found in foam. In developing management regulations, the AIM Act directs EPA to consider opportunities to increase reclamation of regulated substances used as refrigerants. The AIM Act also authorizes up to US$5 million in federal funds to help small businesses purchase new equipment for the recycling, recovery, or reclamation of a substitute for HFCs.

Together, these provisions could provide benefits to those in industry who make early efforts to improve HFC management practices by investing in the reclamation and recovery of HFC from equipment and improved monitoring of equipment servicing and repair.

The Biden Administration is poised to roll out a comprehensive plan phasing down HFCs over the next 15 years. The AIM Act will facilitate federal regulation of high-GWP refrigerants to phase down their use while providing market-based mechanisms that provide industry with flexible compliance options and financial incentives to innovate.

Industry stakeholders should closely follow EPA's rulemaking and take advantage of public participation opportunities in connection with the AIM Act implementation to position themselves for successful compliance.

This post was prepared with the assistance of Joanna Kamhi in the New York office of Latham & Watkins.

The content of this article is intended to provide a general guide to the subject matter. Specialist advice should be sought about your specific circumstances