United States: A Peek Behind The Numbers: The EEOC's Enforcement Statistics Show Fewer Charges Filed In 2020, While Recoveries Surged

Seyfarth Synopsis: The EEOC recently released its enforcement and litigation statistics for Fiscal Year 2020. Notably, the statistics indicate that 2020 saw a dramatic drop in filed charges, with the lowest number of charges filed in over 20 years. For example, despite the #MeToo movement remaining an enforcement priority for the Commission in 2020, the number of gender discrimination charges fell even lower than last year, which was the lowest number since 1997. However, monetary benefits recovered by the Commission in FY 2020 surged. Given the flip of the White House from red to blue and the commitment of the Biden Administration to enhanced enforcement of workplace bias laws, the EEOC's enforcement data is a "must-read" for all employers.

On February 26, 2021, the EEOC released its comprehensive enforcement and litigation statistics for Fiscal Year 2020 (available  here). In addition to enforcement and litigation activity, the data breaks down charge statistics by allegation and state – showing which charges are being filed and where. The dip in the number of charges that employers saw in 2018 and 2019 continued through 2020, with the number of charges reaching its lowest point since 1997. The prominence of gender discrimination charges seen in 2018 due to the #MeToo movement has all but disappeared, with sex discrimination charges remaining in the fourth-place position and dropping to their lowest number in over 20 years.

Charges Were Down Overall

Consistent with this overall decline, there was a decrease in almost every category of charges in FY 2020 as compared to FY 2019, with the exception of a modest increase in charges alleging claims under the Americans with Disabilities Act ("ADA"), charges alleging claims of color discrimination under Title VII,  and, most notably, charges alleging claims under the Genetic Information Non-Discrimination Act ("GINA"), which doubled since FY 2019 and reached the highest number of charges filed since the Act was passed in 2008. The categories that decreased the most were race and sex discrimination. That this does not necessarily mean that fewer individuals are reaching out to the EEOC. This dip could be attributed, at least in part, to the agency's implementation of new charge intake procedures in an effort to increase efficiencies or as a result of the COVID-19 pandemic. The dramatic change in workplace environments could have also contributed to the charge drop. 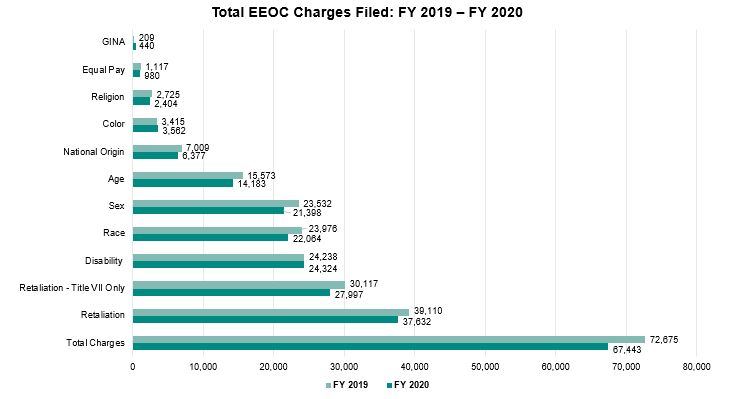 Texas And Florida Are Still Hot Spots, And Illinois Falls From The Top Five

Texas and Florida are no surprise, given their relative populations.

But population is still not everything when it comes to charges. For example, Pennsylvania (at number 3) and Georgia (at number 5, behind California) have more charges filed than New York. Notably, Illinois remained out of the top five states this year, at sixth place with 5.5% of all charges filed.

In total, 37,632 retaliation charges were filed with the EEOC in FY 2020. As has been the case for over six years, this made retaliation the most frequently filed charge in FY 2020. Behind retaliation were disability, race, and sex discrimination charges, each alleged in approximately 32%-36% of the charges filed with the EEOC. As the EEOC's report noted, the percentages total more than 100 because some charges allege multiple bases of discrimination.

Despite the dips in the overall number of charges, the EEOC's enforcement efforts should not be considered as waning. Employers should treat these statistics as an early warning system that shows where the Commission's enforcement efforts may be heading next – to that end, it is notable that retaliation and disability discrimination issues are firmly in the forefront, particularly in light of the issues caused by the COVID-19 pandemic. By continuing to set the culture in their workplaces with sound human resources practices, employers can guard against these issues and avoid hefty settlements and litigation with the EEOC.