United States: The Role Of Mortgage Fraud In The Growing Credit Crisis

by Charles F. Kuyk
Crowe Horwath LLP
To print this article, all you need is to be registered or login on Mondaq.com.

Mortgage fraud is a significant contributing factor to the subprime mortgage meltdown and the ensuing global credit crisis. Perpetrators' schemes resulted in terrible economic damage to both individual homeowners and financial institutions. Author Charles Kuyk addresses the scope of the problem and explains how controls can significantly reduce the risk of mortgage fraud that results in serious and enduring damage.

The story of the subprime mortgage crisis and ensuing credit crunch has been painfully well documented. While early estimates of the scale of the problem put the losses at about $350 billion, recent estimates place the loss at nearly a trillion dollars. The International Monetary Fund (IMF) estimated in its April 2008 "Global Financial Stability Report" that the potential losses in the financial sector for loans and market losses on related securities might be as high as $945 billion,1 noting:

"What began as a fairly contained deterioration in portions of the U.S. subprime market has metastasized into severe dislocations in broader credit and funding markets that now pose risks to the macroeconomic outlook in the United States and globally."2

In his latest book, "The Subprime Solution," economist Robert Shiller said that we are at "a historic turning point in our economy and our culture. ... The forces unleashed by the subprime crisis will probably run rampant for years, threatening more and more collateral damage."

Many of the structured securities at the heart of the subprime meltdown – such as collateralized debt obligations (CDOs) and structured investment vehicles (SIVs) – have all but disappeared from the investing landscape. Subprime mortgage-backed bonds have been rendered "extinct'' by the collapse of the U.S. housing market, according to Jennifer Elliott, group managing director in the Asia-Pacific for Moody's Investors Service.3

No one can predict the final cost of the crisis, but it continues to grow and may well exceed the estimate the IMF made in April 2008. With millions of subprime and Alt-A adjustable rate mortgages (ARMs) resetting in 2008 and 2009, it would not be surprising if the crisis expands.

The market turbulence in summer 2007 primarily stemmed from deteriorating conditions in subprime mortgage-backed derivative securities (CDOs, SIVs), but this turbulence has spread rapidly to other debt markets, such as commercial mortgage-backed securities, home equity lines of credit, and student loans. The growing uncertainty of the valuations of these securities, fueled by the lack of liquidity in their trading, has exacerbated the crisis well beyond expectations. The speed and extent of the crisis caught many by surprise and triggered intervention by central banks to meet financial firms' liquidity needs.

The Federal Bureau of Investigation (FBI) has defined mortgage fraud as "the intentional misstatement, misrepresentation, or omission by an applicant or other interested parties, relied on by a lender or underwriter to provide funding for, to purchase, or to insure a mortgage loan."4 Mortgage fraud is frequently carried out by those working in the mortgage industry, including mortgage brokers, lenders, appraisers, and accountants, as well as borrowers. Acts of mortgage fraud are punishable by up to 30 years in federal prison or fines of $1 million or both.

Victims of mortgage fraud include borrowers, lenders, investors, and those living in and near neighborhoods where mortgage fraud has occurred. Neighboring homeowners are often indirect victims when borrowers become delinquent and default on their mortgages, which in turn leads to foreclosures and the deterioration of surrounding property values.

Mortgage fraud continues to contribute to the subprime mortgage and general credit crisis today. According to the FBI's "2007 Mortgage Fraud Report," mortgage fraud occurred throughout the United States. The FBI's data, collected in 2007 from law enforcement and industry sources, revealed that the top 10 states for mortgage fraud were Florida, California, Georgia, Michigan, Illinois, Ohio, Texas, New York, Colorado, and Minnesota.

The declining housing market in 2007 and 2008 has provided a fertile environment for the schemes of perpetrators of mortgage fraud. The Mortgage Bankers Association forecasts a continued downward trend in the housing market, which will provide unscrupulous real estate insiders with additional incentives to find fraudulent ways to make a profit and more opportunities for scam artists to prey on vulnerable owners and would-be owners of homes.

In addition to the financial institutions with money at risk in their portfolios of mortgages, many federal and state agencies are involved in preventing, detecting, and investigating mortgage fraud. These include the FBI, the U.S. Department of Housing and Urban Development – Office of Inspector General, the Internal Revenue Service, and the two large government-sponsored entities, Fannie Mae and Freddie Mac.

Fraud for housing generally involves misrepresentations by a prospective borrower to support his or her purchase of a residence. The goal is to purchase a house for which the buyer would not otherwise have been qualified.

These misrepresentations typically involve one borrower and one lender and often include the borrower's exaggeration of employment and income levels, the extent and value of assets owned, and/or the understatement or omission of liabilities. In many cases, loan applicants submit forged or fraudulent documents to gain a mortgage. Fraudulent appraisals also are frequently involved in both fraud-for-housing and fraud-for-profit schemes.

Fraud for profit, however, is motivated purely by monetary gain and often involves multiple properties and mortgages as well as collusion by multiple participants in the mortgage lending process. Based on its analysis of suspicious activity reports filed by depository institutions, the Financial Crimes Enforcement Network (FINCEN) confirms that "fraud for profit is often committed with the complicity of industry insiders such as mortgage brokers, real estate agents, property appraisers, and settlement agents (attorneys and title examiners)."5

It is this second category that is of most concern to law enforcement and the mortgage industry because of the magnitude of such fraud in the industry. Gross misrepresentations concerning appraisals, sources of funds, false intent to occupy, and falsified or forged loan documents are common in fraud-for-profit schemes. 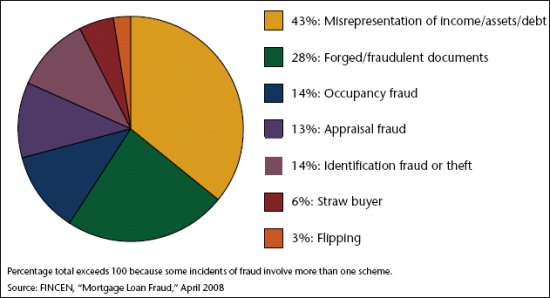 This is how some of the more common mortgage fraud schemes work:

Misrepresentation Of Income, Assets, And/Or Debt. By fraudulently representing the nature of employment or income (by overstating), assets owned (by overstating), or liabilities owed (by understating), a buyer can gain access to a more expensive home than he or she would have gained had truthful disclosures been made. In most cases, these misrepresentations result in higher debt-to-income ratios than the loan originator would find acceptable. As might be expected, loans granted based on fraudulent misrepresentations have a higher incidence of delinquency and early payment defaults.

Appraisal Fraud. Through use of an inflated appraisal on a property, a borrower can purchase a more expensive home than he or she might otherwise have been qualified to purchase. Inflated appraisal values are often the product of relying on inflated comparables or inflated attributes of the subject property. While the appraisal report might appear to be legitimate, the appraiser's description of the property or selection of comparable home sale transactions can be manipulated to produce a higher value than warranted. As with misrepresentations of income, assets, or debt frauds, mortgages gained through appraisal fraud can often lead to delinquency and default when the borrower fails to make loan payments.

Flipping. Although flipping can be a legitimate investment vehicle, it is also used to perpetrate fraud - when the property is purchased, appraised at an inflated value, and then quickly resold. The difference between the original and subsequent purchase price (based on the fraudulent appraisal) is pocketed by the perpetrators. In addition to fraudulent appraisals, flipping schemes often also include other misrepresentations by the fraudulent buyer, such as inflated income and asset disclosures.

Foreclosure Rescue. In this scheme, the victim is typically a homeowner/ borrower facing foreclosure. The fraudster presents the borrower with an opportunity to save his or her house by signing a quitclaim deed to the supposed rescuer, with the understanding that the rescuer will deed it back when the borrower obtains new financing. Unfortunately for the borrower, the rescuer is really a fraudster who records the deed, promptly sells the house, and pockets the proceeds.

Several U.S. regulatory agencies have issued directives on mortgage loan underwriting standards that can serve as useful guidance to lending institutions. One example is the "Statement on Subprime Mortgage Lending" issued jointly by the Office of the Comptroller of the Currency, the Board of Governors of the Federal Reserve System, the Federal Deposit Insurance Corporation, the Office of Thrift Supervision, and the National Credit Union Administration.7 This publication and others provide guidance on risk mitigation techniques that financial institutions can follow to minimize their hazard of being victims of mortgage fraud.

Federal agencies put particular emphasis on the need for institutions to follow sound underwriting practices, particularly when lending to applicants with less than prime credit characteristics, and to ensure that customers have a complete understanding of the terms and obligations of the loans for which they are applying.