by Fernando A. Bohorquez Jr (New York)
BakerHostetler
Your LinkedIn Connections
with the authors

Native advertising has by all accounts been the darling of the digital marketing world in 2013.  Although it comes in all shapes and sizes, the general consensus defines "native advertising" as the practice of designing ads to look like the natural editorial content of the website on which they appear. Native's proponents hail it as the second coming, while critics assail native ads as commercials masquerading as content -- whatever your view, most everyone seems to be doing it. 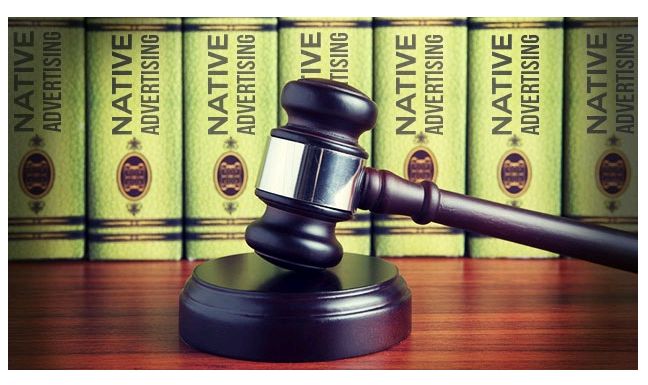 A recent study indicates that about 75 percent of advertisers have gone native and the rest intend to. Social giants like Facebook and Twitter have adopted it, and publishers like BuzzFeed, The Atlantic, and Forbes have embraced it -- each with varying approaches and levels of success.

For instance, in your average BuzzFeed native ad, the site will post advertising content dubbed as articles "Presented By" its featured partners and set up to appear like the rest of BuzzFeed's content, typically in its signature list-of style.

Using its wealth of demographic information to target the most relevant audience, Facebook places ads as "Suggested Posts" directly into user's news feeds. Twitter has a similar approach with "Promoted Tweets." 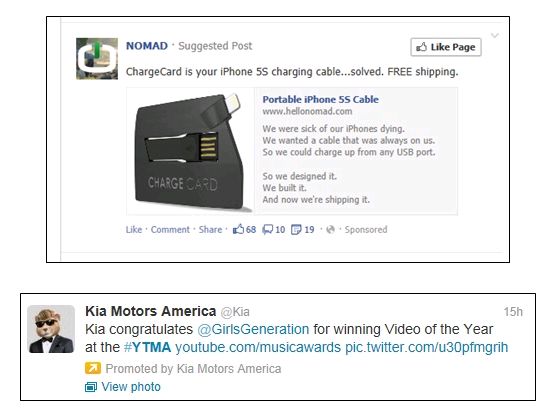 Lately it seems everyone is jumping on the native bandwagon. Instagram announced that its users will soon be seeing sponsored images shuffled into their photo streams. LinkedIn has recently shifted much of its advertising focus to native content, greatly increasing the number of sponsored stories in users' "Updates." Pandora has gone native with the introduction of sponsored playlists. Even The New York Times is beginning to implement a native content platform.

But just because everyone is doing it, doesn't mean what everyone is doing is legal. Now we're not suggesting that native is not a legal form of advertising. Of course it is. But like any form of advertising, native needs to comply with certain laws, rules, and regulations. So native's breakout year begs an important question: How far can brands, advertisers, and publishers legally push it?

The question then becomes: When do these blurred lines between content and advertising become unfair or deceptive in the eyes of the FTC or industry regulators?

Native advertising has actually been around in some form or another since the early 1900s and the heyday of radio (e.g. The Texaco Star Theater). In fact, native today could be considered just the next evolution of the print and TV ad practice often dubbed as "hybrid advertising" by regulators. Blurring of editorial and advertising content in "hybrid ads" (think advertorials or late night infomercials) has long been subject to FTC scrutiny. For instance, the FTC's first infomercial case from the 1980s concerned a complaint against a sunglasses manufacturer for falsely claiming that a 30 minute TV show in an "Inquiring Reporter" format with scientists, "spontaneous" trials on the street, and a talk show format was an independent show as opposed to an ad.

There is no reason that the rules and regulations applicable to non-sexy, non-native ads aren't equally applicable to native. Indeed, as we've written before, advertising law basically requires digital marketers to tell the truth and don't be sneaky just as it does with off-line marketers. Advertisers and publishers looking to stay on the right side of regulators and the law with native ads can look to the FTC's existing rules and regulations for some guideposts, which frankly already govern these practices.

Generally speaking, section five of the FTC Act sets forth the basic principles of advertising law applicable to native:

In addition to these broad principles, the FTC has recently clarified these tenets as applied to the on-line world. For instance, the FTC's recent "Dot Com Disclosures: Information about Online Advertising" offers guidance on issues clearly relevant to many aspects of a typical native advertising campaign. As summarized in the "Dot Com Guidelines" (which we recommend every digital marketer read), one key principle is that online advertising needs to be disclosed as such. Moreover, the "Dot Com Guidelines" make plain that online advertisers need to ensure that any disclosures fit into the context in which the advertising appears and are placed in close proximity to the ad. All these points apply squarely to native advertising.

The FTC's guidance on sponsored search engine results suggests some best practices for native advertising as well. In these search engine guidelines, the FTC recommends that sponsored search results should be clearly set apart from organic search results. The FTC approves such methods as shading and borders around the sponsored results to set them apart. This might inform digital marketers in how they should set apart their native content from editorial content of a site.

Finally, the FTC's guidance on online endorsements is also relevant to native advertising. The online endorsement guidelines make clear that the FTC wants the relationship between advertisers and content creators, like bloggers, clearly and conspicuously disclosed. This is particularly relevant in the context of paid endorsements on social media. Obviously, if the FTC is requiring bloggers to disclose any "material connection" to a brand, (i.e., a connection that might affect the credibility of the endorsement), the FTC will follow suit with native advertising and at minimum require identification of any native content as an advertisement. Most native ads already identify the commercial brand by stating "Sponsored by," "Presented by," or something similar. Although it remains to be seen whether the FTC will require anything more, advertisers should be especially careful not to be too cute when disclosing the material connection.

Do we need specific regulations for native advertising?

No regulator or self-regulator has determined to date whether additional specific regulations are needed. But the growth of practice is clearly on the radar.

For instance, the FTC will host a native advertising workshop on December 4 to examine the practice. Titled "Blurred Lines: Advertising or Content?", the workshop will bring together FTC representatives with panelists from digital publications, advertising industry organizations, academia, and consumer groups, including Huffington Post, IAB, Columbia School of Journalism, and Public Citizen. Notably, there is a good chance that the workshop may result in FTC guidelines, similar to this year's updated "Dot Com Disclosures" after the May 2012 workshop.

On the self-regulatory side, IAB has created a task force to explore the native landscape with the goal of providing best practices. The National Advertising Division of the Better Business Bureau (or "NAD") recently issued its first decision a few weeks ago addressing native advertising practices, finding that Qualcomm was not obligated to continually identify itself as the author of several sponsored content articles after expiration of the agreement because Qualcomm didn't author the content. At a micro-level, a few publishers are starting to promulgate their own native guidelines. For instance, after the now infamous Scientology debacle, The Atlantic adopted native content guidelines, which include a two-stage review process, prominent "sponsored content" labels, and monitoring of user comments.

Even without more specific guidance, the foregoing FTC online regulations provide a good framework for digital marketers. Here are a few quick lessons that can be gleaned from existing rules and regulations:

Disclosures should be prominent in the context users will engage the ad
The second point for native we think is critical: Not only do you have to disclose, but you have to make sure that disclosure is visible in the context it appears. The key difference in native advertising today is just how well it blends in with editorial content. Take, for instance, the BuzzFeed story in the image below:

Without the "Presented By" text, it would be incredibly hard to distinguish that story from the other content of the site. It would likewise be hard to distinguish if the disclosure was in tiny text, not included alongside the ad itself, or otherwise obfuscated from the content. One of the criticisms of The Atlantic after it published its infamous Scientology article was that the article was not clearly distinguished from the rest of the site's content.

Vet your native content
At the end of the day, you're on the hook for your own advertising practices. No matter how honest your intentions, if the host of your native advertising is deceptively displaying it like true editorial content, or in a manner likely to deceive consumers, you may incur liability. Make sure it's clear up front with the websites hosting your native content: How does that site separate out its native content from its editorial content? How long will your content be posted? If the content remains on the site after the agreement period, will it continue to be marked as sponsored? Most publishers vet any form of advertising to ensure quality and brand consistency, and these concerns apply with even more force with native ads. As mentioned above, this is one lesson The Atlantic learned the hard way.

In other contexts, when content created by a company is reasonably in the "public interest" or considered non-commercial, such as reporting on current events or making some larger societal point, that speech may be protected by the First Amendment from certain legal claims like copyright infringement or government regulation. In a prominent California case, for instance, L.A. Magazine successfully defended a misappropriation of image lawsuit from Dustin Hoffman after imposing his head on female model in a "butter-colored silk gown by Richard Tyler" for a fashion article that spoofed iconic movie scenes. Although the photo was part of the cover story and used to sell magazines, the court held that it wasn't necessarily commercial speech. The article "as a whole" was a "combination of fashion photography, humor, and visual and verbal editorial comment on classic films and famous actors." And the fact that part of its purpose was to increase magazine circulation and sales wasn't enough to render it purely commercial. According to the court in that case, "[c]ommon sense tells us this is not a simple advertisement." Question whether the same could be theoretically said for certain types of native ads.

The near future may hold some specific regulations or guidelines on native advertising. But until then, the best practice for native ad campaigns is to follow as close as possible existing advertising rules and guidelines and keep in mind the three points mentioned above.