United States: A Promise To My Father: Helping One Veteran At A Time

My father, Colonel John J. Cassidy is a highly decorated Vietnam veteran. Last Wednesday, I celebrated his birthday and honored his service by volunteering at the Los Angeles County Bar Association's Veterans Legal Services Project clinic. It was a coincidence that Proskauer's sponsorship of the clinic fell on my dad's birthday, but the connection between my father and my involvement in the clinic has deep roots. I participate in the clinic because of my dad – to fulfill a promise I once made him.

My father administered my oath of office when I was commissioned to the Navy in 1992. In the years that followed, I relied heavily on his advice to find my way through the triumphs and trials of a young Naval officer. After completing my active service, I went to law school, raised a family and built my legal career. My father's advice was still relevant to the business world and served to guide many of my steps along the way to becoming a partner at Proskauer.

When I moved to Los Angeles six years ago with Proskauer, I immediately noticed the city's need for veterans' services. California has the largest number of veterans in the country – at the time 1.8 million, with 335,000 in Los Angeles County. According to the groundbreaking 2014 Los Angeles County Veterans Study, conducted by the USC School of Social Work Center for Innovation and Research on Veterans & Military Families, nearly eight in 10 service members were leaving the military without a job and nearly a quarter of veterans in Los Angeles County with jobs were earning at or below the poverty level. 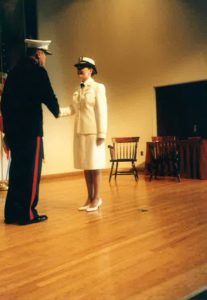 Colleen Hart and her father during her
commission to the Navy in 1992.

Thanks to Proskauer's active and impactful pro bono and corporate responsibility programs, I knew that I could do my part for my firm and my new city. I was immediately overwhelmed by the possibilities. There were so many wonderful and worthy organizations. I wanted to take cases that made an impact but I didn't know where to start.

So, I called my dad. He said this:

"Help one at a time – and don't forget my men." He told me not to forget the average sailor, solider and marine. The kind of men and women he served with – the unsung heroes. They do their duty, come home, raise a family, work hard, and maybe sometimes need a little help. He told me that these are the people he fought with in Vietnam. "Help them," he told me, "one at a time."

I promised I would.

Soon after that conversation, I discovered the LACBA Veterans Legal Services Project. The Project offers legal services, clinics, and self-help workshops to remove barriers to veteran employment. Through a monthly pro bono clinic at Bob Hope Patriotic Hall in downtown Los Angeles, volunteer lawyers sit down with veterans to offer assistance for issues such as traffic tickets, outstanding warrants and expungements.

A simple traffic ticket, normally $35, can end up costing over $1,000 with the addition of penalties and assessments if not addressed immediately. Veterans may not have the money to pay the fines, often resulting in suspended licenses or warrants. These warrants, in turn, may limit a veteran's ability to apply for or change jobs.

Veterans come to the clinic for assistance because, under California law, there is some discretion for judges to take into consideration military service and its after-effects when deciding whether to dismiss a traffic ticket or expunge certain convictions. The Project has an outstanding success record for veterans who qualify for the Project's services.

Proskauer has sponsored the veterans' clinic for the last six years during which Proskauer attorneys have helped hundreds of veterans. At the 2019 Los Angeles County Bar Association Armed Forces Ball in October, Proskauer was presented with the Patriotic Hall Legal Clinic Award.

On the night of my father's birthday, I sat down with a veteran who came in for help with a ticket. I confirmed his name and contact information and then we started to go over his service. He was a Marine. Served in Vietnam in 1965, during the first wave. "You served with my dad – same time, same place," I said, dumbfounded. "How about that?" he said, unflapped. 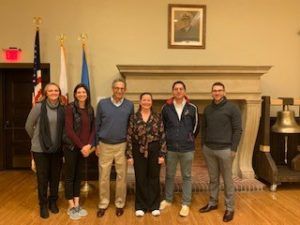 We went over his life after the service and what brought him into the clinic. He came home from Vietnam, raised his family, worked for 40 years and was now retired. The ticket he received had the wrong birthdate and the original notice of hearing was sent to the wrong address. He just received a second notice, now with a huge fine that he could not afford to pay on his fixed pension. The notice said that his license would be suspended if he did not pay but he needs his car to go to the grocery store, the doctor and the senior center. I gave him information on how to get a new hearing date and on how the Project could assist with the hearing. And there it was. As simple as that. Help one at a time.

"Thank you for your service" I said to the veteran when we were done. "Thank you," he said. "And thank your dad too."

A Promise To My Father: Helping One Veteran At A Time