The IPO concluded in their 2021 paper 'The changing profile of users of the UK patent system' that the general downwards trajectory of patent applications at the IPO in recent years is down to the a "complex mixture of components", including a loss of applications from "one-off applicants or applicants with very small portfolios". Of course, there are also early indications that Brexit and COVID-19 may have had affected applicants' behaviour - particularly from UK-based applicants, for whom applications in 2021 are down 3.2% relative to 2020 (from 11,960 to 11,573). Indeed, if we take a look at data from the EPO's 'Statistics & Trends Centre' for UK-based applicants of EP applications, we see the numbers are similarly down in 2021, down 1.2% relative to 2020 (from 5,698 to 5,627).

Figure 1 also shows the marked increase in UK patent grants in recent years (10,899 in 2021, up 11.5% relative to 2020). The IPO has put this down to their recent achievement in clearing their patent examination backlog, which has seen the number of late patent examinations1 reduced from 13,000 to zero in the last three years. 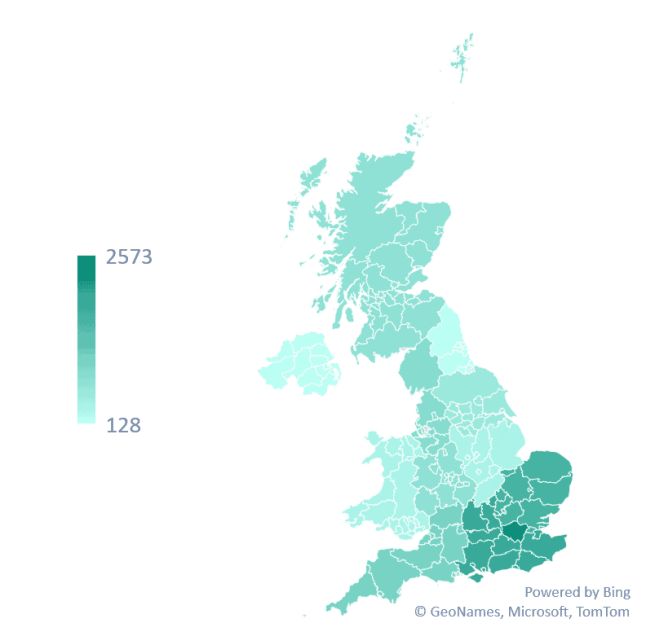 Figure 2 - 2021 patent applications at the IPO from UK applicants, by home region.

Taking a look at the top applicants in terms of both the number of patent applications filed and the number of patents granted in 2021 - as in Table 1 below - we see significant activity from big players in the electrical and computing fields. IBM, for example, filed over 300 applications in 2021, while Ocado Innovations, who use AI and machine learning to optimise warehouses and reduce food waste, filed an impressive 123 applications. Halliburton, the US energy industry multinational, were granted over 500 UK patents in 2021.

In terms of technology areas, there has been a noticeable increase in patent publications in all IPC sections4. As seen in Figure 5 below, the most significant increase in publication activity since 2020 - in absolute numbers - comes from the "Electricity" IPC section, which covers such innovations as electrical components, electronic communication techniques, and electrical power generation. The IPC section "Physics", including optics, computing, and cryptography amongst other fields, remains the most active overall in 2021. 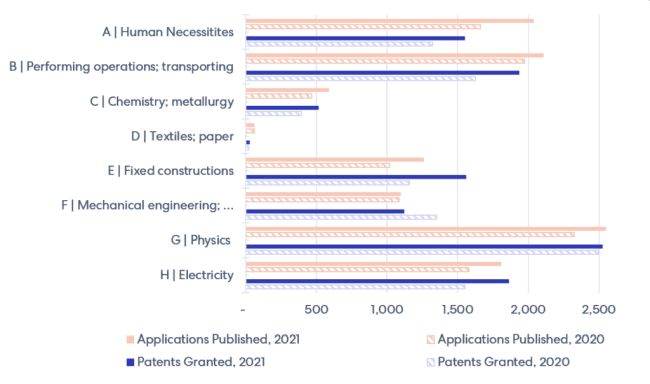 There is some evidence of a small number of applicants shifting to using the EPO instead of the IPO. The different trends between the two offices are driven by changes in the behaviour of applicants, as would be expected in the current climate and given the differences in fees and coverage of the two. The majority of applications to the IPO are still from UK applicants, however UK-based applications and applications from abroad have dropped in recent years.

1. Patent backlogs are those that have not been examined more than 42 months after the initial application.

2. Where regions are determined based on the address given for the first named applicant. The regions are those used by IPO: East Midlands; East of England; London; North East; North West; Northern Ireland' Scotland; South East; South West; Wales; West Midlands; and Yorkshire and The Humber.

3. Where countries are determined based on the address given for the first named applicant. There are 15 applications for which the country of origin is unknown.

4. Sections are the highest level of hierarchy of the IPC system. Counts are based on the first / inventive IPC allocated to each application.

ARTICLE TAGS
UK Intellectual Property Patent Trademark
POPULAR ARTICLES ON: Intellectual Property from UK
The IP In NFTs – What Is Being Purchased?
Herbert Smith Freehills
As we reported in our first blog post in this series, non-fungible tokens (NFTs) are a new asset class that is being adopted eagerly across all sectors...
Overcoming Hurdles When It Comes To Marketing Activity For The Birmingham Commonwealth Games
Marks & Clerk
Sponsors might have been locked in for months, or even years, but there are plenty more businesses that will be keen to capitalise on the buzz and positive energy around the upcoming Commonwealth Games...
By Design: Where To File First?
Haseltine Lake Kempner LLP
When applying to register a design, most applicants will eventually want to secure protection in many places around the world. However, it is typical to begin with a single application in one country or region, ...
Innovation In Hydrogen Fuel Cells: An Analysis Of Intellectual Property Trends
Marks & Clerk
The world is looking to decarbonize its fuel and energy sources, and clean-burning hydrogen is poised to have a key role in energy storage.
A Global View Of Innovation
Cipher
Every day, a huge number of patents are filed for new technologies.
Music Rights - Striking A Chord With Investors
Mayer Brown
As global transactional deal activity flourished throughout 2021, a particular asset class was hitting all the right notes with investors.
FREE News Alerts
Sign Up for our free News Alerts - All the latest articles on your chosen topics condensed into a free bi-weekly email.
Register For News Alerts
Article Tags
UK Intellectual Property Patent Trademark
Similar Articles
Powered by mondaq AI
MATCH
45%
What Makes A Good Patent Attorney? Marks & Clerk
48%
Supplementary Protection Certificates: Additional Protection For Regulated Products Haseltine Lake Kempner LLP
73%
How Do I Go About Getting A Patent? Keltie LLP
69%
British Science Week: Patent Filing Strategies, And The Importance Of Portfolio Growth Gill Jennings & Every
69%
2014 UK Patent Applications Up From 2013 Marks & Clerk
Related Articles
What Next For Standard Essential Patents (SEPs) In The UK – Responses To The UKIPO's Call For Views Herbert Smith Freehills
Patenting DLT Innovations In Europe Marks & Clerk
UPC – The Location Of 13 Local And One Regional Division Courts Announced And Numbers Of Legally Qualified Judges At Each Herbert Smith Freehills
European Software Patentability: The Big Split Kilburn & Strode
The IP In NFTs – IP Issues When Minting NFTS – IP Ownership And Infringement In The Metaverse Herbert Smith Freehills
Mondaq Webinars
Litigation Funding in Canada
Nomos Capital Corp.
Private Wealth - Getting it Right: Trusts, Foundations and Funds
Dixcart Group Limited
More Webinars
Comparative Guides
Anti-Corruption & Bribery
Artificial Intelligence
Banking Regulation
Blockchain
Cartels
More Guides
Mondaq Advice Centres
UK
Coming to and Investing in the UK
Global
Trademarks in SAARC Countries
More MACs
Curated Content
Protection For Plant Varieties In Europe And The UK Post-Brexit
Dehns
The Silent Treatment: The EPO's Approach To Non-therapeutic Methods Encompassing Therapeutic Effects
Dehns
Implications Of The Genetic Technology (Precision Breeding) Bill On The Life Science IP Sector
Dehns