The Intellectual Property Enterprise Court (IPEC) has held that the CHINA TANG trade mark, used for a Cantonese restaurant called "China Tang" at the Dorchester Hotel in London, was infringed by the running of a Chinese takeaway in Barrow-in-Furness under the name "China Tang" by West Lake East Ltd (WLE).

Back in 2005, GNAT and Company Limited (GNAT) registered the series mark CHINA TANG shown below for among other things, "Restaurant services; catering services; cafes; cafeterias; and self-service restaurants" in class 43: 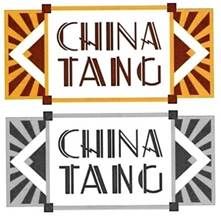 GNAT licensed the mark to China Tang London Limited (CTL), which had run an opulently decorated Cantonese restaurant called "China Tang" at the Dorchester since 2005. In contrast, Mr Gu, the sole director and owner of West Lake East Limited (WLE), ran a Chinese takeaway in Barrow-in-Furness. WLE had started trading in 2009. Mr Gu and his wife owned the freehold in WLE's business premises and WLE had traded under the name "China Tang" at all times. Some images of the shop front and a sample menu are shown below:

GNAT and CTL alleged that Mr Gu and WLE had infringed the CHINA TANG mark. WLE and Mr Gu argued that the differences in location and style between an upmarket restaurant in Park Lane and a modest takeaway in Barrow militated against there being confusion in the real world, asserted honest concurrent use and counterclaimed for partial revocation of the CHINA TANG mark because of non-use, insofar as it was registered for "cafes; cafeterias; and self-service restaurants" (but not restaurant or catering services).

HH Judge Hacon found that the average consumer was a user or potential user of restaurant or catering services; in other words almost every adult and child in the UK. This broad characterisation applied whether or not the specification of the CHINA TANG mark included "cafes", "cafeterias", and "self-service restaurants".

Due to the aural identicality of the CHINA TANG trade mark and WLE's "China Tang" sign, the close visual similarity between them and the close similarity between WLE's services and the restaurant services covered by the CHINA TANG specification (in particular, the services of low-cost restaurants which typically offer takeaway services), the judge decided that there was a likelihood of confusion.

In cross-examination, Mr Gu admitted that before choosing the name "China Tang" for his business, he had not performed a trade mark search for the name "China Tang" or an internet search for restaurants of that name. The judge took the view that even if Mr Gu had conducted a basic internet search for "China Tang", he would likely have found CTL's Park Lane restaurant website and/or reviews and commentary about it. Honest practices would then have required him to obtain legal advice about the intended trading name for his business.

Accordingly, the judge found that WLE was unable to rely on the defence of honest concurrent use, and Mr Gu was jointly liable for the acts of infringement.

This judgment reminds us that honest concurrent use will only arise in exceptional circumstances, an example being the Court of Appeal's decision that the use of "Ideal Home" for online retail services by Media 10 Ltd (the organisers of the Ideal Home Show, an exhibition which had been running since 1908) was not infringing because it was honest and had no adverse effect on the essential function of the IDEAL HOME mark, which belonged to IPC Media (the publishers of Ideal Home magazine, first published in 1920).

The case involving the IDEAL HOME mark illustrates that two businesses can use the same trade name for a long period of time, which is likely to cause a certain level of confusion amongst consumers, but that doesn't necessary amount to infringement.

However, as HH Judge Hacon noted, the proceedings involving the CHINA TANG mark were "not one of the rare cases of honest concurrent use contemplated by the Court of Appeal in IPC Media".

In this particular case, the failure of Mr Gu to check the availability of the CHINA TANG name prior to choosing it for his business proved fatal, with the judge of the clear view that size does not matter:

"... had the defendant been a large enterprise with a trade mark department which diversified by opening a single takeaway in Barrow and which failed to conduct a trade mark search, it would be hard not to conclude that this failure was not in accordance with honest practices absent good reasons for the failure. That would remain true even if the failure was negligent rather than deliberate. I can see no principled reason for a cut-off related to the size of the enterprise below which such a failure remains in accordance with honest practices. Setting up even the smallest business is likely to require competent legal advice on a variety of matters and that should include the trading name. A public register of other parties' rights is there to be consulted, in part so that those rights may be respected."

Our full article on this case appears in Entertainment Law Review: please click here for link to abstract on Westlaw.

ARTICLE TAGS
UK Intellectual Property Trademark
POPULAR ARTICLES ON: Intellectual Property from UK
The IP In NFTs – What Is Being Purchased?
Herbert Smith Freehills
As we reported in our first blog post in this series, non-fungible tokens (NFTs) are a new asset class that is being adopted eagerly across all sectors...
By Design: Where To File First?
Haseltine Lake Kempner LLP
When applying to register a design, most applicants will eventually want to secure protection in many places around the world. However, it is typical to begin with a single application in one country or region, ...
European Software Patentability: The Big Split
Kilburn & Strode
The long and winding code – a short history of European software patentability through the lens of pop culture
Protection For Plant Varieties In Europe And The UK Post-Brexit
Dehns
The International Union for the Protection of New Varieties of Plants (UPOV) functions to "provide and promote an effective system of plant variety protection...
French Supreme Court Says Cross-border Patent Infringement Claims May Be Possible
Herbert Smith Freehills
The French Supreme Court issued a decision quashing a Paris Court of Appeal decision and thereby opening the door to the jurisdiction on the merits of French courts to rule on cross-border...
Patenting DLT Innovations In Europe
Marks & Clerk
In Europe, inventions that utilise distributed ledger technology will generally fall under the heading of "computer-implemented inventions (CIIs).
FREE News Alerts
Sign Up for our free News Alerts - All the latest articles on your chosen topics condensed into a free bi-weekly email.
Register For News Alerts
Article Tags
UK Intellectual Property Trademark
Similar Articles
Powered by mondaq AI
MATCH
53%
Fowl Play In Reading? Dehns
51%
A Dog's Breakfast: Use Of ZUMA For Dog Food Infringes Famous Restaurant's Trade Mark Gowling WLG
51%
Give A Dog A Bad Name - ZUMA Trade Mark Infringement And Own Name Defence TLT Solicitors
49%
For Nando's And Fernando's: Independent Restaurant Accused Of Trade Mark Infringement Waterfront Solicitors LLP
49%
For Nando's And Fernando's: Independent Restaurant Accused Of Trade Mark Infringement Waterfront Solicitors LLP
Related Articles
The New Standard For Sequence Listings Keltie LLP
Deeds Not Words Marks & Clerk
European Software Patentability: Cheating Your Way To The Finish Line Kilburn & Strode
Mintel Sustainability Barometer Cipher
Can '#zombiebrands' Come Back To Life? Why Do Such Brands Cause Problems For #trademarklaw? Find Out This And More On HGF Ltd
Mondaq Webinars
Litigation Funding in Canada
Nomos Capital Corp.
Private Wealth - Getting it Right: Trusts, Foundations and Funds
Dixcart Group Limited
More Webinars
Comparative Guides
Anti-Corruption & Bribery
Artificial Intelligence
Banking Regulation
Blockchain
Cartels
More Guides
Mondaq Advice Centres
UK
Coming to and Investing in the UK
Global
Trademarks in SAARC Countries
More MACs