Although the shape and form of Brexit is as yet unclear, the UK Competition and Markets Authority (CMA) is in a state of transformation, readying itself for its new role in a changing and uncertain world.

The CMA's immediate challenge is whether to plan for a transitional deal or a no-deal, hard Brexit? "It is a very delicate phase. There is a lot of uncertainty," says CMA Chief Andrea Coscelli. The high level of uncertainty over the interface between the EU and UK merger regimes is starting to impact real-life scenario planning.

What is clear is that many EU merger filings post-Brexit will also face a parallel review in the UK. Until now, large mergers have been investigated either by Brussels or by national competition authorities, depending largely on the merging companies' revenue. A 'safety valve' referral mechanism allows cases to be referred from national authorities to the European Commission or vice versa where the other authority would be better placed to conduct the review. Following Brexit, the Brussels one-stop shop will no longer extend to the UK and this will lead to parallel EU and UK merger-review proceedings.

On what date will jurisdiction shift? And what happens to ongoing reviews and mergers that have been agreed to or announced but not yet notified?

What is certain is that there will be a significant increase in UK merger reviews. Last year, the CMA reviewed 62 mergers and the five-year average sits at around 66 cases per year. The CMA is expecting a further 30–50 merger cases per year as a result of the change in jurisdiction. This means an increase in workload of some 75 percent. 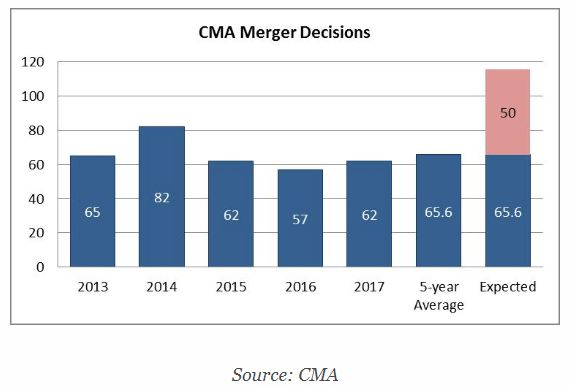 In order to deal with the additional case load, the CMA has negotiated additional funding of some £20.3m, much of which will be spent on increasing the size of its case teams by some 240 officials, an increase of almost 40 percent. The CMA is actively recruiting officials but they are finding that it is a significant challenge to fill such a large number of posts in time for the increased workload. In parallel, the CMA is aiming to reduce costs by moving to Canary Wharf from central London and by building up case-handling teams in Edinburgh and Manchester.

2. The Impact on Business

Additional filings mean an increase in regulatory burden and scrutiny. Companies need to factor in separate UK processes in their planning. These may be run on different timetables to those in the rest of Europe. As is already the case with other authorities around the world, early pre-planning and engagement will lead to better outcomes.

The CMA has already indicated that it may need to change its merger-control processes so that it can deal with remedies earlier in the investigation than has been the case to date. This will allow it to coordinate its approach with other authorities internationally, and, crucially, to contribute to the collective thinking around the substantive analysis.

One of the key features of the UK merger-control system is the voluntary nature of the regime, which means that parties have no obligation to file a transaction for review. For the time being, it will remain a voluntary regime. That does not mean that the parties can ignore the UK in a case where the UK market is affected. The CMA actively monitors mergers and is likely to call in those cases that would have previously been reviewable in Brussels. The CMA's estimates 30-50 such cases irrespective of whether they are pro-actively pre-notified or left to the CMA to call in.

We do not expect voluntary nature of the regime to change in the short to medium term, but it is the oddball in Europe and we would expect a debate around a mandatory regime to resurface periodically.

If the UK were to leave the EU on Friday, 29 March 2019 without a transitional agreement, there is a question mark over which merger-control regime would apply on Monday 1 April 2019 and, critically, what would happen to ongoing merger reviews. This is becoming increasingly pressing. With less than six months to go before "Brexit day," this is beginning to feature in scenario planning for currently planned mergers, as the more complex cases are already likely to straddle Brexit day. The UK government's technical guidance on a "No-deal Brexit" remains vague: speak to both authorities and take legal advice.

It seems reasonably clear that where the UK automatically ceases to be a member of the EU by virtue of the expiration of the two-year notice period under Article 50 TEU, the EU Commission loses jurisdiction over the UK aspects of mergers. This is because, as a nonmember state, the European Treaties will no longer apply to the UK by virtue of Article 50(3) TEU. The UK would then, for merger-control purposes, be similar to Switzerland. The inability to adopt a decision in respect of the UK affects not only mergers notified after 29 March, but also ongoing merger reviews of cases notified before that date.

The UK merger legislation provides that the CMA generally has jurisdiction3 to investigate for up to four months after completion of a transaction. As such, there should not be a jurisdictional gap, given that the CMA could in theory investigate any lapsed EU review of a UK market. However, the position is not that straightforward, because the UK merger legislation continues to contain references and some carve-outs in respect of EU merger reviews. Unless the legislation is changed before 29 March 2019 (which seems optimistic in the currently crowded legislative schedule) some messiness and uncertainty will almost inevitably remain. More importantly, such a change in jurisdiction will lead to disruption and, potentially, delay.

Potential pragmatic solutions to such issues do exist, of course, and these are set out below. Such solutions would require close dialogue between the relevant authorities and the merging parties and some careful choreography. We believe that it is likely that the CMA will seek to review an ongoing merger when there are likely to be effects in a UK national or local market or in a wider geographic market of which the UK is part. At the moment there is significant reticence on the part of the Commission to envisage nondeal scenarios but it may be hoped that on live cases, particularly closer to the deadline, a more pragmatic approach may prevail.

In this case,4 the EU Commission will continue to have jurisdiction for the remaining EU-27 member states beyond 29 March 2019. The UK will automatically receive jurisdiction over the UK market after (but not before) 29 March (again, provided the UK thresholds are met).

One approach could be that the parties engage in a parallel dialogue with the CMA. The CMA is actively encouraging such a dialogue. For the parties, this means some duplication (and potentially some additional time) but it will enable them to submit a CMA filing immediately after 29 March (if necessary). More importantly, it will mean that the case team is assembled and ready to go. Such a UK review will restart the clock—which is then a UK clock ticking under a UK process.

A more creative, and possibly more elegant, solution would be for the merging parties to seek a pre-notification referral back to the UK under Article 4(4) EUMR ahead of time. The result of such a referral (if granted) would be to re-allocate a case to the UK under EU rules, which could happen even before 29 March. Once re-allocated, the CMA could then review the merger under UK rules and should then be unaffected by the events on 29 March. The same result could be achieved if the CMA (rather than the parties) made such a referral request under Article 9 EUMR during an ongoing investigation.

The referral mechanisms are most likely to be relevant in complex cases involving substantive issues and/or where timing or legal certainty is particularly important.

This will be more complex, as UK withdrawal (due to the associated loss of UK turnover for the purposes of the EU turnover thresholds) could cause the EU Commission to also lose jurisdiction for the remaining EU-27 member states. In that case, the transaction would need to be renotified in the EU-27 national authorities where the notification thresholds are exceeded, as well as the UK's CMA. This would invariably lead to delay and procedural complexity.

One possible workaround in a sufficiently complex case would be to consider simultaneous referrals up to the EU Commission from those remaining national authorities under Article 4(5) EUMR. This would clearly require some careful choreography (and goodwill) from national competition authorities but could be a way to minimise disruption.

An argument could also be made that the Commission's jurisdiction in relation to the remaining EU-27 countries is established at the time of the agreement or announcement of the bid and that subsequent changes do not affect this.5 There are some significant issues with such an approach6 and it would be brave for the Commission to rely on this in cases involving substantive issues or where appeals are a possibility—but it does underline the uncertainty of the situation. Whether any or all of these potential solutions are feasible will depend on a number of factors, including the presence or absence of substantive and/or timing issues and the willingness and ability of the authorities to work with the parties to find pragmatic solutions.

Alternatively, parties could hold off notification until 1 April. . . .

3 As long as the jurisdictional thresholds are met. These are target turnover of £70m or more or a combined share of supply of 25 percent (and an increment).

4 At which point, UK turnover will no longer be counted towards the EUMR turnover threshold.

6 First, the relevant provisions in the Combined Jurisdictional Notice (apart from being a notice rather than a binding legislative act) relate to changes in the parties' turnover and not, as is the case with Brexit, a change to the Commission's jurisdictional reach. Second, there is not a single 'trigger event' that could establish jurisdiction, as mergers in contemplation and completed mergers in the UK also constitute such trigger events so that choosing only one of these events would seem an artificial basis to establish exclusive jurisdiction for a prospective merger analysis.