Investment in blockchain, smart contract and related areas has been gathering pace and focus now turns to making the innovative ideas a reality in the financial services sector including insurance.

Clyde & Co's team is actively engaged in reviewing such transactions on a multi-sector basis and our series of papers from 2016 dealing with some of the detailed considerations can be found at https://www.clydeco.com/insight/search/list/any/all-regions/any/any/any/any?q=Blockchain§ion=&y=&m=&author=any&tag=&orderby=post_date&sort=desc.

We highlight below some of the core factors to consider when aligning the exciting new technologies with the existing legal framework.

What is blockchain and distributed ledger technology?

A blockchain is simply a database or ledger. Given its broad meaning, it can be a database of virtually any recordable information (for instance the transfer of bitcoins – its pure meaning). Blockchain platforms store data in "blocks" and "chain" them together to form a cohesive, unbreakable record of that information. The wider term is Distributed Ledger Technology (DLT) which encompasses, but is not limited to, blockchain platforms.

The joint operation of two features in particular make DLT potentially revolutionary. First, identical copies of the particular ledger are stored on and accessed from many computers around the world – sometimes in the thousands or more, other times on a couple. Hence the distributed in DLT. Any attempted addition or change to the ledger is only allowed if permitted by the code; is authenticated by the entire network of servers and any validated change to one ledger automatically updates the others. Second, the cryptographic technology that validates the changes is both transparent to the whole network and secure records are created. Once amended the record cannot be altered (it is immutable). All of these events take place practically instantaneously.

So-called smart contracts are coded instructions which execute on the occurrence of an event. These often use DLT or blockchain technology to record and execute transactions. Whilst their common name is arguably a misnomer (they are not necessarily contracts in the traditional legal sense), their implementation can enable, for example, insurance monies to be transferred virtually immediately on the occurrence of an event (such as a travel insurance payout following a delay to a flight). In their purest sense the code – once agreed – becomes self-executing and self-governing and thus (it is argued) replaces the need for a wider contract or checks and balances. Thus the code replaces traditional legal contractual script.

Usage in the insurance sector

There are various examples of how the technology maybe utilised in the insurance sector, so as to produce what we have dubbed 'Smart Policies':

Any area is ripe for development in which the availability of trusted data held on secure ledgers, thus bypassing intermediation, allows either fractional costs savings at the lower end of the spectrum or whole new product models at the extreme.

Those who are charged with implementing Smart Policies will need to consider a number of key factors, each of which will turn on the nature of the transaction. At its simplest, they may relate to a simplified "railed" payment scheme or, at its most complex, a multi-tiered and multi-party placement involving insurers, reinsurers and retrocessionaires and potentially with linked financing support. 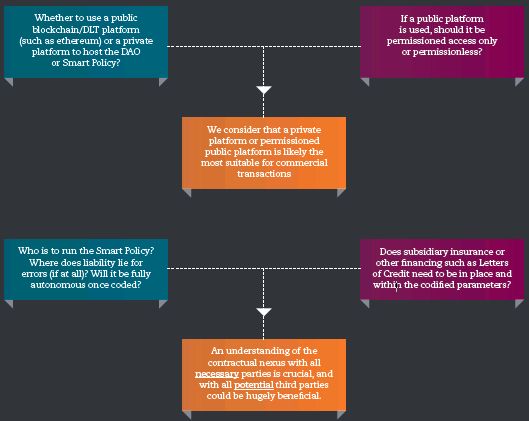 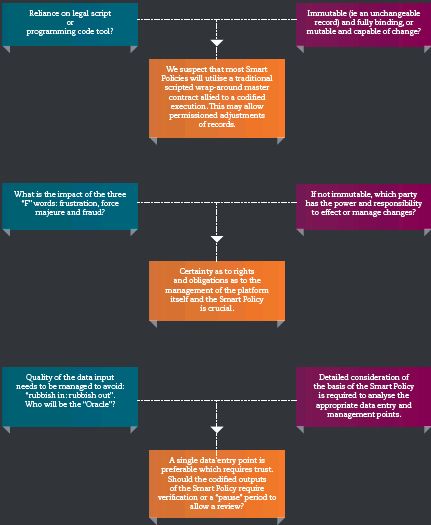 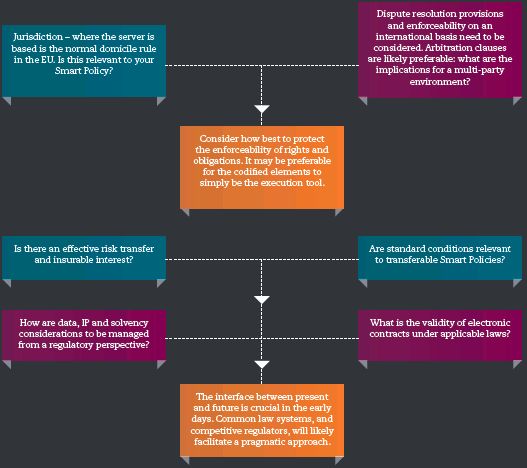 In addition to the usual regulatory and contractual matters, we see three areas in which legal advice needs to be allied with appropriate programming and technical support:

None of these factors need inhibit the development of this technology. The insurance market, with its acceptance of risk and traditional reliance on short form contracts (slip policies) which build upon underlying agreements and relationships, is in our view ideally placed.