UK: What Is Distributed Ledger Technology?

by David Grant
Marks & Clerk
Your LinkedIn Connections
with the authors

Distributed ledger technology (DLT) is an umbrella term for a range of network platforms in which data is stored in a shared ledger that is distributed across the nodes of the network, rather than its being stored by a single central authority. One of the best known examples of a DLT is Blockchain, which provides the technical infrastructure for the Bitcoin cryptocurrency. The high profile of Blockchain in the field of finance – and increasingly other sectors as well – means that the terms Blockchain and DLT are often used synonymously with one another. 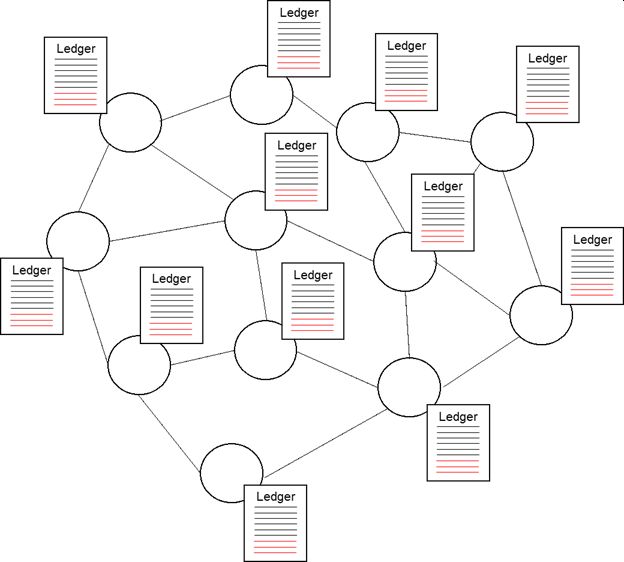 The basic principle of a DLT can be understood with reference to the diagram above, which shows a peer-to-peer network of computer nodes that are able to communicate with one another directly. Each node holds a copy of a digital ledger that stores details of transactions as entered by the various nodes. Where a new transaction is carried out, a node commits that transaction to the ledger; the transaction is then be validated by the other nodes in the network using one of a number of different consensus mechanisms. Once agreement is reached, each one of the nodes updates its copy of the ledger to include the transaction.

Each newly validated transaction is linked to one or more previous entries in the ledger so as to form a sequence of linked transactions. Typically, this is achieved through use of a cryptographic hash function with each block of transactions referencing a preceding block by including a hash of that preceding block within its header. The name "Blockchain" itself derives from the way in which blocks of transactions are linked together in a chain; other types of DLT have also been proposed in which the chain structure is replaced by a different type of structure for linking transactions, such as a distributed acyclic graph (DAG). The serial linking of transactions in this way, coupled with the absence of any single centralised authority responsible for maintaining the ledger, means that the data stored in the ledger is very hard to tamper with. Any modification of the data in an earlier block will cause a knock-on effect in which the data is subsequent blocks must also need to be modified, something that can only be done with a consent of the majority of the nodes in the network.

One particularly important development in the field of DLTs has been the introduction of smart contracts, which came to the fore with the emergence of the Ethereum blockchain. A smart contract is a piece of computer code that can be used to automate the execution of transactions on the blockchain, once certain criteria have been met. For example, a smart contract could be used to record the assignment of a physical asset from one party to another, when an agreed amount of funds have been transferred from the assignee's account to the assignor's account.