by
CGLytics
Your LinkedIn Connections
with the authors
To print this article, all you need is to be registered or login on Mondaq.com.

Mark Zuckerberg has been Chief Executive Officer of Facebook, Inc. since he founded the company in 2004 and has held the combined position of CEO/Chair since the Company's IPO in 2012. Shareholders have increasingly voiced their concerns regarding the combination of both roles. Those opposing the combined CEO/Chair position state that it gives Zuckerberg too much control over the company, where minority shareholders already have very little influence. Founder Mark Zuckerberg controls over 51% of the vote although he owns only 13% of the economic value of the firm. Additionally, headlines surround the billionaire founder, as Zuckerberg again failed to address a committee of international lawmakers who are amid an investigation into Facebook's disinformation, antitrust, and privacy scandals.

In light of the above, several investors have banded together and filed multiple shareholder proposals for consideration at the company's 2019 AGM, which took place on May 30th, 2019, aimed to alleviate their concerns over Zuckerberg's influence and lack of oversight of the company. Of interest were proposal five and six filed.

Proposal Five: Proposed primarily by NorthStar Asset Management, in conjunction with other groups of shareholders, requesting that each share be given an equal vote. Currently, Class B shares (controlled by Zuckerberg and a small group of others) have 10 times the voting power of Class A shares. They continued in their supporting statement noting "since July 2018, Facebook value dropped as much as 40% due to Management and Board decisions that have not protected shareholder value. By allowing unequal voting power, our company takes public shareholder money but does not provide us an equal voice in our company's governance..."

Proposal Six: Recommended that the Chair of the Board of Directors operates as an Independent Member of the Board. The supporting statement offers that there exists no form of checks and balances in order to limit Mr. Zuckerberg's power. The statement continues, "we believe this weakens Facebook's governance and oversight of management. Selecting an independent Chair would free the CEO to focus on managing the Company and enable the Chairperson to focus on oversight and strategic guidance." It's of importance to note that nearly 60% of the S&P 1500 has separated the roles of Chief Executive Officer and Chairperson as of April 2018. This proposal received the public support of both the Council of Institutional Investors (CII), as well as Trillium Asset Management.

Unsurprisingly, the Board of Directors has concluded with a recommendation to vote against all stockholder proposals mentioned above. However, the requests made through these proposals heavily resemble several that have been proposed in past years.

CGLytics has taken a deeper look into Facebook's board composition and effectiveness when compared to all other companies in the US market. Utilizing CGLytics' governance data and analytics in the specialized platform it was discovered that the key area where the company is underperforming, compared to the sector average, lies primarily in the combination of the role of CEO and Chairman. 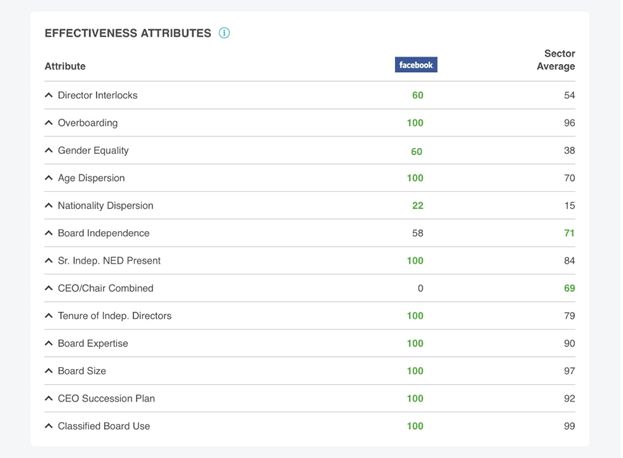 The zero score for the CEO/Chair criterion is in sync with the concerns of the shareholders who are seeking the dissolution of the combined position. This is also supported from the NYSE Stewardship guidelines, where the separation of the CEO/Chair position is required. However, taking all other factors into consideration, Facebook's board composition and effectiveness is rated 'Very Good' and higher than the sector average. Even though the CEO/Chair combination has a score of 0, the majority of the other effectiveness attributes rank above the sector average.

The effectiveness attributes in the chart above are based on the company in question's governance practices compared to the corporate governance code of the market in which it is primarily based (in this instance, the NYSE stewardship guidelines). The thresholds above are set by empirical research performed by CGLytics. Each attribute receives a score from 0 to 100, with a score of 100 reflecting the best governance practices.

Given the repeated failure of such proposals at the company's most recent AGM, the future of Facebook seems to remain in the hands of Mark Zuckerberg. It comes as no surprise that these proposals would have similar results as those at previous AGMs, given Zuckerberg's voting power at the firm. However, the increasing regularity of these types of proposals have been making headlines around the company's governance structure and posing serious questions to the general public regarding Zuckerberg's current and future role at the company.

Corporate boards and executive teams increasingly require a broader range of analytical tools to identify potential areas of reputational risk, even for controlled companies, which could make them the object of activist campaigns. For more information regarding how CGLytics' deep, global data set and unparalleled analytical screening tools can potentially help you identify these areas of risk, click here.