In 2019, across the European Union, 126 nuclear power reactors are in operation in 14 Member States, with a total estimated capacity of 118 GW and an average age of close to 30 years. In France, Finland, Slovakia and Great Britain, six reactors are currently under construction. Meanwhile, some other EU countries are also planning to build new plants.

Nuclear energy is considered one of the key instruments for a sustainable, competitive and secure EU energy system in 2050, as set out in the EU's Energy Roadmap 2050.

Supporting this is a recent study by Deloitte for FORATOM, which emphasised the current and potential economic benefits that the nuclear power industry has on employment and the creation of highly skilled jobs, state revenue and economic growth within the European Union.

So far, so positive. However, in the UK, all but one of the 15 existing nuclear power stations will be retired by 2025, leaving only the 1.2 GW Pressurised Water Reactor at Sizewell B in operation.

Without any new nuclear power stations opening, around 60 TWh a year of low carbon energy will be lost, affecting both the UK's energy security and its ability to achieve its ambitious emission reduction targets.

A NEW GENERATION OF NEW BUILD

A succession of UK Governments have, since the UK reversed its previously adverse policy to nuclear new build, supported and encouraged nuclear new build as nationally significant infrastructure projects. Eight sites have been confirmed as being suitable for new nuclear power stations (all of which are adjacent to sites of existing nuclear plants). New build proposals have been developed for six of the sites. 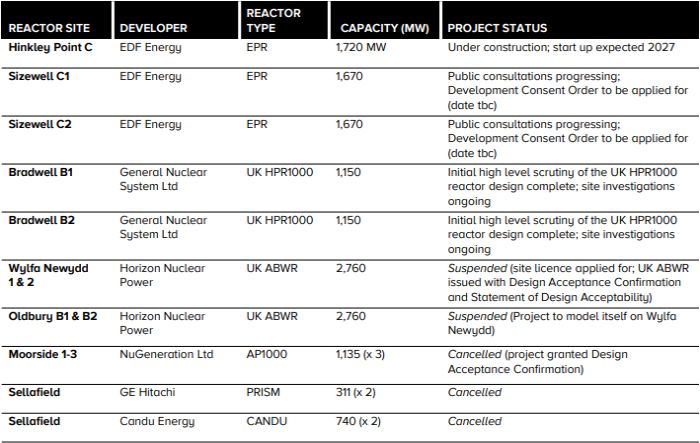 Hinkley Point C is currently under construction and will provide some 3.2 GW of capacity, from two Areva European Pressurised Reactor (EPR) units. The first unit is due to be completed by the end of 2025. The 3.2 GW Sizewell C, Hinkley Point C's duplicate project, is awaiting site approval and an investment decision.

Bradwell B is still progressing its Generic Design Assessment (the process for accreditation of China General Nuclear's UK HPR 1000 reactor) and also awaiting site approval and a final investment decision. Other projects at Wylfa, Oldbury, and Moorside have been suspended or cancelled.

The much anticipated renaissance of a new generation of new nuclear build has stalled. The questions are why, and what can be done?

The assessment process of the nuclear regulators, the Office for Nuclear Regulation and the Environment Agency and Natural Resources Wales, enables them to scrutinise new nuclear power station designs before they are built, identify any potential design or technical issues early and ask the reactor designer to address them. In doing so, they provide assurances to the developers that their designs have been approved in a country with a high reputation for safety and risk assessment, with potential benefits for marketing that technology in other countries.

The UK regulators are dealing with a number of different reactor technologies – Hitachi's ABWR, China General Nuclear's UK HPR1000, EDF's UK EPR" and Westinghouse's AP1000®, none of which have yet been deployed in the UK.

This contrasts with a "fleet approach" adopted in other countries such as South Korea, where a single, tried and tested (and therefore generally more economical) reactor design is adopted for all new nuclear power plants.

In addition to the three technologies being assessed, different financial support models have also been proposed. For Hinkley Point C, a Contract for Difference (CfD) (a contract under which the developer is paid an agreed amount per megawatt hour, which enables the generator to stabilise its revenues at a preagreed level) with a strike price of £92.50 MWh has been agreed.

While the strike price of £92.50 was considered high (even at the UK Government's own admission), the expectation was that through lessons learned and economies of scale, it would be possible to deliver subsequent nuclear power plants at a reduced strike price.

The UK Government had reportedly been prepared to take a onethird equity stake in the Wylfa Newydd project, alongside investment from Hitachi, Government of Japan, export credit agencies and other strategic partners. It had also considered guaranteeing all of the required debt financing to complete construction, and a Contract for Difference with a strike price expected to be no more £75 per megawatt hour.

For Moorside, a more private equity-based solution was proposed. Nonetheless, NuGeneration Ltd, the developer, said the Government would be an essential stakeholder in any nuclear project and also suggested export credit agencies as an important source of capital.

As part of the Government's 2018 Industrial Strategy, the Nuclear Sector Deal talked about "the right support from the government" and a "new approach to building power plants" to help meet the Clean Growth Grand Challenge.

Recently however, Horizon Nuclear Power said that it was suspending the Wylfa Newydd and Oldbury projects as "satisfactory" commercial arrangements could not be agreed. The Moorside project has been cancelled altogether, primarily owing to financial difficulties of NuGen's parent company, Toshiba, but also due to a reluctance of the company to assume the significant construction risk associated with such a complex and large-scale project.

In response to the suspension of Wylfa Newyyd and the cancellation of Moorside, the Secretary of State, Greg Clark, said the Government continued to "believe that a diversity of energy sources is a good way and the best way of delivering secure supply at the lowest cost, and nuclear has an important role to play in our future energy mix".

However, so far, the UK government's level of support, has been insufficient to enable Horizon and NuGen to reach agreement. The question is therefore, if this was not the right support, then from both parties' perspectives what is?

Developers and other stakeholders have recently called for an alternative approach towards financing nuclear power projects, namely that of the Regulated Asset Base (RAB) model. The Government has listened and is currently reviewing the viability of the RAB model and assessing whether it could offer value for money for consumers and taxpayers.

The RAB model was originally developed in the UK as a regulatory construct to provide comfort to investors in privatised infrastructure in regulated sectors, i.e. the electricity, natural gas, railways, telecoms and water sectors. Under this model, a private company acts as the infrastructure manager, owning, investing in and operating the assets. The infrastructure manager receives revenue from users and/or subsidies to fund its operations and recoup investment costs.

The RAB assesses the value of the assets used in the performance of a regulated function, and allows a regulated return based on the value of the investment and the combined rate of return on equity and debt. The operating costs are recouped on a payas-you-go basis. The RAB model generally allows all capital expenditure to be recovered sooner than it otherwise would have been.

In practice, this can provide pricing certainty, and with price certainty comes increased investor and financier confidence. Use of RABs have enabled a lower cost of capital for privately financed infrastructure investment, often much lower than under project finance contracts, e.g. 5-7% rather than 15% or more. In the context of nuclear power projects, which have extremely high upfront capital costs and long build periods, the RAB model should allow investors to recoup at least a portion of their investment far earlier than the typical 10 years it takes a nuclear plant to start generating revenues. Further, as investors will need to borrow less for a shorter period of time, interest payable on bank loans during construction (and therefore the overall financing costs for the projects) are expected to fall, ultimately reducing shareholder funding commitments and funding risk.

The RAB model lacks any specific legislative basis and instead relies on primary duties being imposed on the relevant regulators. Nonetheless, the RAB model benefits from reputational support, such that it has been applied most recently on the Thames Tideway Tunnel Project. The current value of investment under the RAB financing model in water, gas and electric networks and regulated airports in use today is approximately £160 billion.

The Government has indicated that it will publish its assessment of the RAB model by the summer at the latest, as part of a planned Energy White Paper. The question will be whether a RAB financing model would be suitable for nuclear power, taking into consideration the technological, economic, political and regulatory characteristics of the UK energy market, and address key investor issues for new nuclear, including significant construction risk exposure.

The Energy White Paper and assessment of the RAB model will be awaited with interest. Whether it can give certainty to a sector which has been handling three different nuclear technologies, at different stages of implementation and under different financial models, remains to be seen.