IN THE LAST EDITION OF OUR ENERGY & INFRASTRUCTURE INSIGHT, WE DISCUSSED THE UK'S NEW-BUILD NUCLEAR PROGRAM AND THE VARIOUS CHALLENGES IT IS FACING. IN PARTICULAR, WE NOTED THE ANTICIPATED PUBLICATION OF BOTH AN ENERGY WHITE PAPER AND A CONSULTATION ASSESSING THE REGULATED ASSET BASE (RAB) MODEL AS A POTENTIAL ALTERNATIVE TO THE FIT CFD MODEL FOR FINANCING UK NUCLEAR NEW-BUILD.

The anticipated Energy White Paper has yet to appear. The Department of Business, Energy & Industrial Strategy (BEIS) has, however, published its Consultation (Department of Business, Energy & Industrial Strategy, RAB Model for Nuclear – Consultation) on a RAB model for new-build nuclear projects and sought industry's views on the same.

Accordingly, the Government has proposed a bespoke nuclear RAB model, based on the banked Thames Tideway Model, but with nuclear-specific adaptations.

The Government's fundamental objective is to de-risk newbuild nuclear projects so that they can secure an investment grade rating to support equity financing from institutional infrastructure investors (such as pension funds) and debt financing in the form of low-cost, long-term 'nuclear bonds'.

To understand how this de-risking might be achieved one first needs to understand the RAB Model, and then how it might be applied to nuclear.

THE EVOLUTION OF THE RAB MODEL FOR NUCLEAR NEW BUILD

The RAB Model is a form of economic regulation which is already widely used for U.K. monopoly infrastructure assets (water, gas and electricity networks). Under this model, the Project Company receives a license to build, finance, operate and maintain an asset and charges users for the cost of doing so.

Based on the RAB, the Regulator then determines the level of charges which the Project Company can pass to end-users (consumers). These charges are also are adjusted periodically to reflect changes in circumstances, including inflation.

In the Thames Tideway Tunnel project, the U.K. Government recognized that the high capex requirements, high complexity and consequent major construction risks meant the private sector would not finance that project at a sufficiently low cost without greater public/private risk sharing. In these respects, new-build nuclear bears many similarities to Thames Tideway.

When developing the Nuclear RAB Model, BEIS used the Thames Tideway RAB model as a starting point but proposed certain modifications—primarily to reflect the even greater construction costs and risks associated with new-build nuclear.

The Government has identified four specific features that would be required to de-risk new-build nuclear and therefore substantially reduce the cost of capital:

A Government Support Package (GSP) to protect investors and consumers against certain low probability but high impact risk events deemed otherwise 'unbankable'. Specifically, the risks that the GSP would protect against include:

The quid pro quo of these protections is that returns to shareholders would be capped, and in the event of certain delays/costs overruns, even suspended.

An Economic Regulatory Regime (ERR) to ensure the fair sharing of cost and risk between investors and consumers. Based on certain "building blocks" (including return on capital, depreciation and operating costs), the Regulator would determine the Allowed Revenue that would enable the Project Company to recover its costs and generate a return on capital to finance those costs.

In a deviation from the classical RAB model, the Project Company would be entitled to recover all of its forecast Project Costs according to a base-case based on global benchmarking and due diligence undertaken prior to grant of the RAB licence (the so-called 'ex-ante' approach).

This contrasts with the classical 'ex-post' approach described above whereby Project Costs are only included in the RAB if they have been efficiently incurred.

Importantly, the Project Company would also receive Allowed Revenue from 'Day One' of construction. This should significantly reduce financing costs, given it would allow the Project Company to start servicing its debt from the outset rather than incur substantial amounts of interest on loans that would otherwise be fully outstanding for the duration of the 5- 10 year construction period.

Finally, up to a pre-determined Funding Cap, a certain percentage of cost overruns will be shared between consumers and than equity investors.

A diagram showing the alignment between capital costs, RAB build-up and financing sources is set out below: 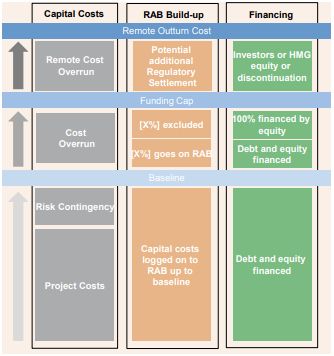 A new, independent economic Regulator, to regulate the ERR and be responsible for protecting the interests of consumers, while having regard to the ability of the Project Company to raise finance.

A variable Revenue Stream mechanism, providing a £/MWh price (calculated periodically by reference to the Allowed Revenue), allowing for adjustment by the Regulator as circumstances change, and through which funds can be raised from electricity suppliers (and ultimately electricity consumers). 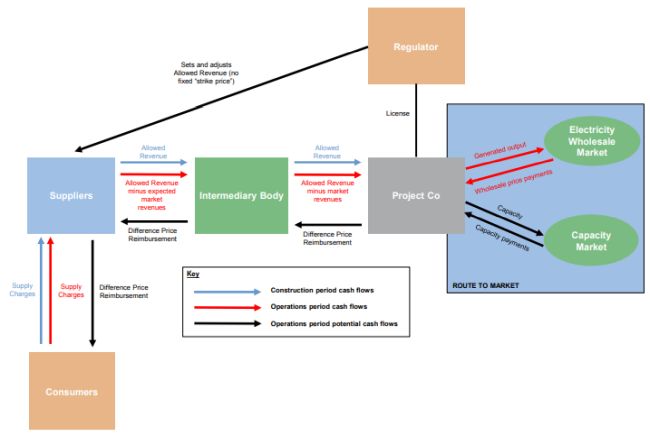 HOW HAS INDUSTRY RESPONDED?

The Government believes that the RAB model will enable new nuclear to be built at scale by both enabling access to lower cost capital and ensuring greater value for money to consumers than the FiT CfD model. The question is: does industry agree?

Initial responses have been broadly positive. The industry has welcome the apparent simplicity of the model. The industry has also acknowledged that the RAB model has the potential to significantly reduce the cost of capital.

As always, however, the devil will be in the detail— particularly as this model has never been applied to projects as complex and costly as new-build nuclear.

Further, it is still to be considered whether the nuclear RAB model offers sufficient value to money for consumers and taxpayers.

On one hand, if the model reduces the cost of capital this should also generate a welcome reduction in new-build nuclear electricity prices.

On the other hand, given consumer sharing of liability for cost overruns, and the fact that Allowed Revenue is payable to the Project Company from day one (i.e. whether or not the relevant plant is ever completed), both consumers and taxpayers would also bear some significant risks.

While the UK's Nuclear Industry Association (NIA) believes BEIS has identified a viable funding model in the RAB, it notes that the model is still very "high level".

The NIA has also noted that flexibility will be required if the model is to be adapted to different nuclear technologies, including small modular reactors.