In the wake of the COVID-19 pandemic, governments across the world introduced arrangements aiming to support businesses in retaining employees by subsidising all or some of their salary. Ius Laboris UK firm Lewis Silkin surveyed these in 2020; here they present the results of a 2021 follow up survey.

In the wake of the COVID-19 pandemic, we carried out an international survey to identify if various jurisdictions were supporting their employees through job retention schemes and wage subsidies, for temporary lay-offs during the COVID-19 pandemic. A year later, we have reviewed each government's scheme.

The 2021 survey reveals significant differences between the remaining schemes still offered, with some schemes already terminated, a variation in subsidised amounts and replacement schemes being introduced. 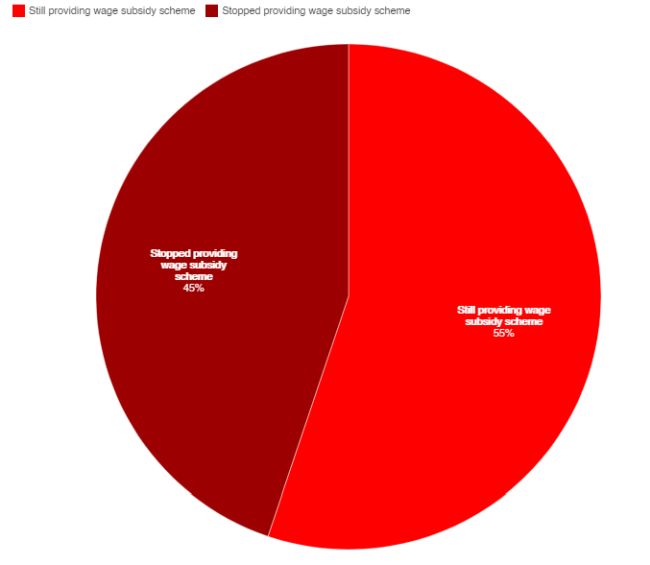 Most countries have created a replacement scheme 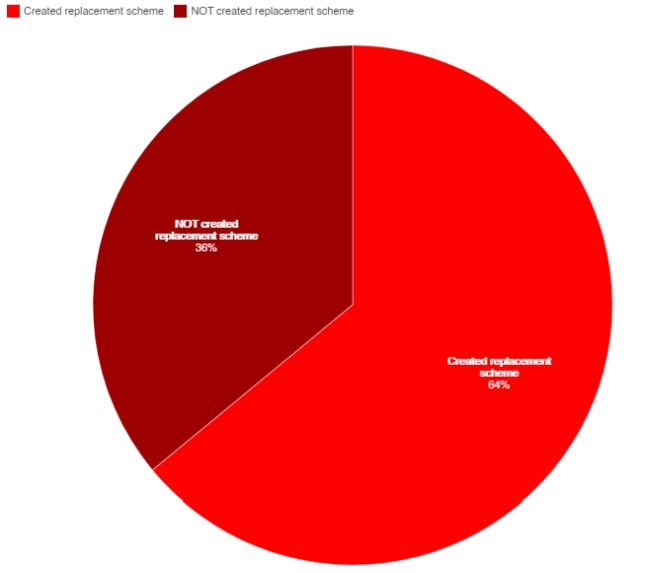 When surveyed last year, the majority of wage subsidies were due to end by December 2020, however given the ongoing pandemic and subsequent effects to employment, it is no surprise that an overwhelming majority of jurisdictions have maintained their schemes well into 2021, with some continuing support with no anticipated end date.

Some countries reduced the amount paid under their wage subsidy scheme 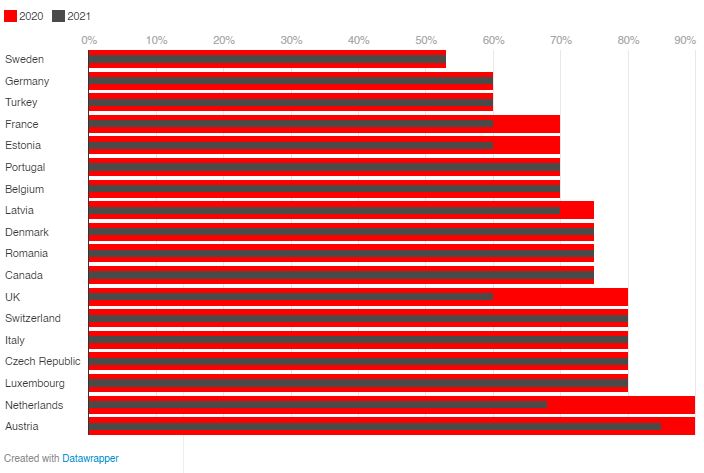 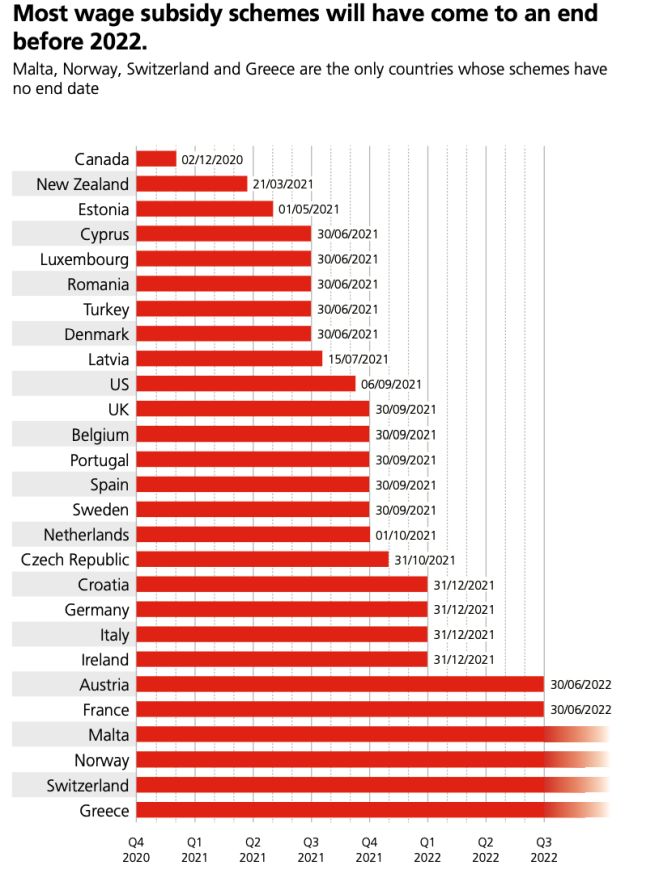 It comes as no surprise that just over half of the countries surveyed (16 countries) are still providing some form of wage subsidy scheme. Given the ongoing pandemic and subsequent effects to employment, many jurisdictions have extended their original schemes, with some jurisdictions being more generous than others. In early 2020, Norway, Switzerland  and Greece  all had expected end dates, with the latest support ending in September 2020. However, all three jurisdictions have since decided to extend their schemes, without a new end date specified. This is in stark comparison to a number of jurisdictions who have also extended their schemes, however ensured an end date is specified, for example Spain, who have stipulated 30 September 2021 as an end date, with the possibility of government extensions should there still be a need for support. Canada and New Zealand were some of the first jurisdictions to end their support programmes, with Canada  ending in December 2020 and New Zealand terminating support in March 2021.

Approaches to wind down

Currently in the United Kingdom, the furlough scheme has been extended numerous times, but is also expected to draw to an end on 30 September 2021. The UK Government decided to gradually reduce the amount contributed towards the scheme, offering an opportunity for more input from employers to contribute towards their furloughed employee wages. From 1 July 2021, the level of grant was reduced, and employers were asked to contribute towards the cost of their furloughed employees' wages. To be eligible for the grant, an employer must continue to pay furloughed employees 80% of their wages, up to a cap of GBP 2,500 per month for the time they spend on furlough, however 70% is government contribution and employer contribution is 10%. From August – September, government contribution will be reduced to 60% and employer contribution is set at 20%. This is in stark comparison to Portugal, which is also offering its wage subsidy scheme till 30 September 2021, however the State has maintained their original offering of paying 70% and the employer bearing the remainder 30%, provided the company is within a crisis situation, such as business closure or supply chain disruption.

Last year, under the programmes offered in Greece, Croatia and  New Zealand, no percentage cap was stipulated in their schemes and, in some other cases, the financial limit offered varied depending on whether the employee was full or part-time. In Greece  for example, they have now reduced the subsidy amount and introduced a cap on the financial support offered. From December 2020, the subsidy amount for employees, whose employment contracts were suspended, was/is EUR 534, reduced from the original EUR 800.

Out of all the countries surveyed this year, the Netherlands, displayed the largest drop in percentage cap from 90% offered in early 2020, to 68% of monthly salary support now offered. There has also been a slight change in conditions of the scheme. Last year, employers could claim up to 90% of the salary costs in the event of a 100% turnover reduction. The current scheme allows for a subsidy to a maximum amount of 85% of the total salary costs, but also caps the turnover reduction at 80%.

Sixteen countries out of those surveyed have introduced replacement wage subsidy schemes, with varied packages on offer. Belgium's current scheme ends on 30 September 2021, however, an alternative scheme has been introduced, where companies that are facing a lack of employment as a result of the COVID-19 pandemic and unable to employ their personnel at the usual rate will, most likely, be able to benefit from a stricter regime of temporary unemployment for 'economic reasons'. This will include strict conditions and procedure.

Similarly, Czech Republic have announced a replacement scheme called 'Kurzarbeit', still to be enacted by government. The new scheme is only expected to be activated in autumn or winter, should the pandemic deteriorate significantly and is set to last for a maximum of six months with repeated extensions of up to three months. The contribution will be provided in the amount of 80% of compensation of salary provided to the furloughed employees by their employer and may not exceed 1.5 times the average salary. The support would also cover social security and health insurance payments.

Despite Canada  ending their original scheme at the end of 2020, there are various schemes offered to provide support to those out of work. The 'Canada Recovery Benefit' (CRB) is the most similar to the Canada Emergency Response Benefit (CERB) which was previously offered. The CRB offers CAD 500 per week for up to 38 weeks, no different to the CERB that was offering CAD 2,000 per month. This is available to workers who are not employed or self-employed for reasons related to COVID-19 or have had their income reduced by at least 50% due to Covid, and not eligible for Employment Insurance.

Countries such as Estonia, Italy  and the United States  have chosen not to introduce replacement schemes.

Germany  and Turkey  are amongst countries that have decided to maintain all aspects of their original schemes and not alter eligibility.

This is in comparison to Malta, where the circle of employers that can now benefit from their scheme has been considerably reduced. In 2020, at the beginning of the pandemic, the grants were available to a list of employer types, for example hotels, shops and manufacturers which were affected by the pandemic. Now, the grants have been restricted to the tourism sector only.

In 2020, Croatia  limited the scheme to only employers experiencing a decline in turnover, or employers who were able to provide evidence of cancellation of orders, business contracts and reservations due to COVID-19. Croatia has now provided further slight modifications to the scheme's eligibility. To receive Government support, there must be a decrease of employee total working hours of at least 10% for the relevant month, which must be connected with disruptions in business processes. To prove this disruption, there must be:

Similar to the start of the pandemic, the overall levels of financial support and processes for wage subsidy distribution remain varied, however it is encouraging to see so many countries still providing some form of support and introducing replacement schemes which ensure that some struggling sectors are not neglected in the road to recovery. It remains to be seen whether some jurisdictions will now implement permanent programmes which adopt some form of the existing schemes.