Turkey: The Future Of Domestic Coal-Fired Power Generation In Turkey

Even in the most liberalized power markets production planning requires a policy approach so that the long term balance of the market will be secured and other policy objectives are also watched. That is exactly why the policymaking functions are still being kept and carried out by the ministries while regulatory functions are undertaken by the sector-specific regulatory bodies. Having said that, one needs to reiterate the crucial statement in power markets: "Even in highly liberalized power markets, generation is still subject to long-term planning.1"

There are several rationales underlying such a philosophy. First of all, the construction of power plants takes quite a long time so one needs to start deciding on how much to generate today given the demand forecasts for the future. Second, although electricity is one of the most homogenous goods, it is not possible to argue the same for power plants. There are at least three types of plants: base load plants, shoulder plants and peak load plants. The system should be designed such that an appropriate amount of plant from each type should be available at a given point in time.2 Third, some technologies may be at the priority agenda of the policymakers for several reasons such as being domestic, politically preferable or environmentally friendly. Last but not least, some types may create more domestic jobs than others, and it is a crucial parameter for political purposes. 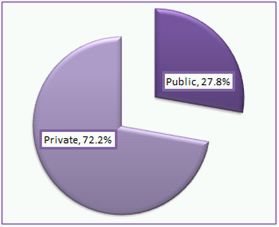 Debates in developing the coal-fired power capacity in Turkey should be evaluated from this perspective. In 2001, Turkey embarked on a massive electricity market liberalization program and established the sector-specific regulatory body, Energy Market Regulatory Authority (EMRA). Secondary legislation then followed and the government, to a great extent, quit the power generation sector through privatizations and abstaining from building new ones as well. As of the end of 2015, more than 70 percent of the installed capacity belongs to the private sector including the BO-BOT-TOR3 plants for which the contractual period comes to end on a time-phased basis. 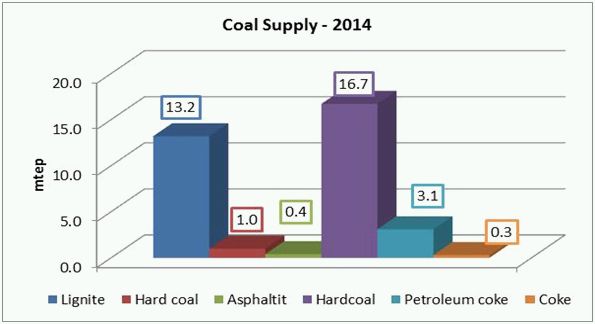 Lignite accounts for the vast majority of domestic coal supply. Although lignite production has been increasing in the long term, its variance is quite high. Based on the data published by the Ministry of Energy and Natural Resources (MENR), lignite production was 62.6 million tons in 2014, quite lower than its peak level in 2008 which was 75.6 million tons. Imports for hard coal, on the other hand, increased steadily and reached almost 30 million tons in 2014.7 Domestic hard coal production has declined substantially during the same time period.

As of the end of 2015, coal accounted for 21.2% of total installed capacity in the power portfolio of the country. In terms of generation, coal scored second just after natural gas with a 28.4% share in total. 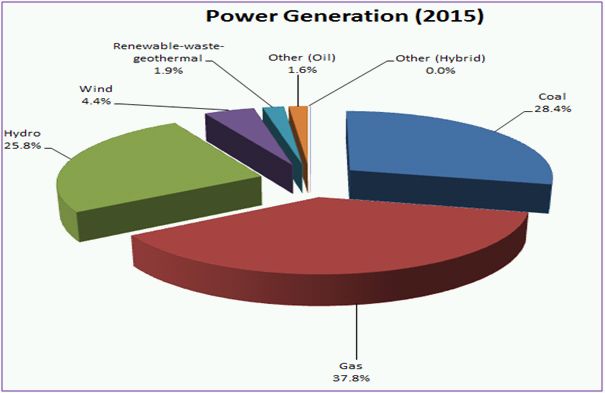 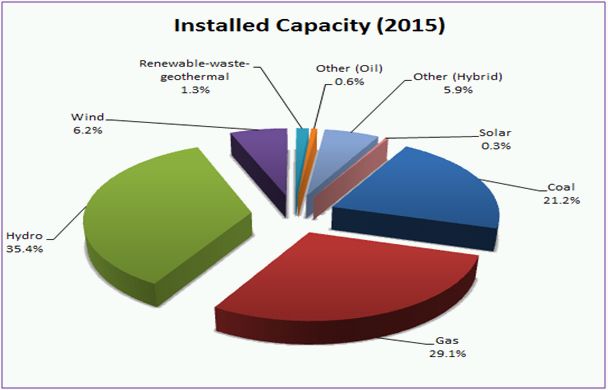 The government has specific targets for utilizing the domestic coal reserves in power generation. More specifically, all of the domestic coal resources have been set as a target to be utilized fully. As discussed above, the government has good reasons for putting coal as the primary source of power generation. It is domestic; it alleviates import dependency and current account deficit, it is cheap (without considering the environmental negative externalities); it can be dispatched as base-load plant, and it creates domestic jobs more than other types.

As of April 2016, power plants fired by domestic coal (both lignite and domestic hard coal) and above 100 MW capacity are depicted below. As seen from the table, 9,215 MW is already in operation while 3,025 MW and 2,311 MW plants are either under construction or granted preliminary licenses by EMRA:8: 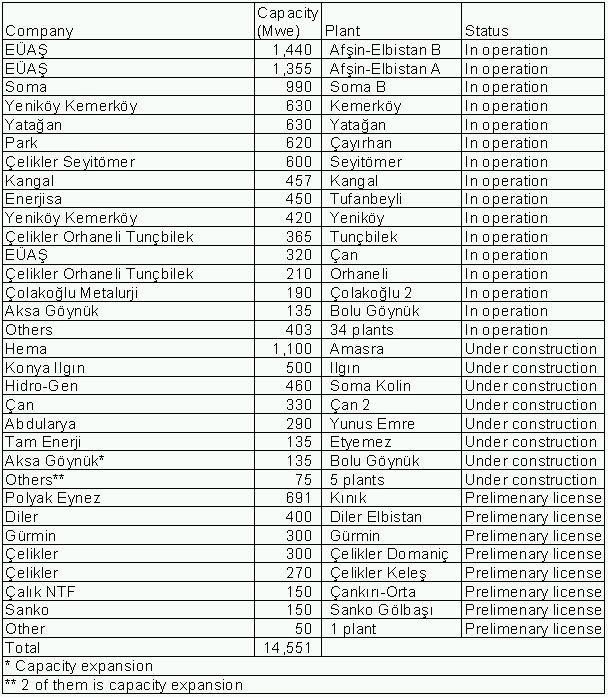 From a constitutional perspective, natural wealth and resources shall be under the authority and the disposal of the State. Article 168 as follows:

Thus, models are needed to be developed such that exploration and exploitation rights are delegated efficiently to private parties while constitutional restrictions are respected. Further complicating is the need to peg this to power generation.

Traditionally, royalty/leasing10 method has been implemented to allocate the rights for exploration and exploitation domestic coal reserves. Most recently royalty/leasing auctions were carried out which also incorporated power plant contingencies. The on-going projects are as follows:11 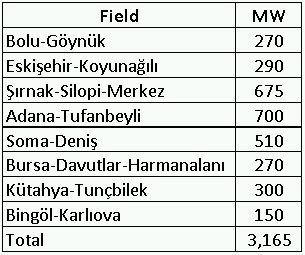 In 2015, additional fields have been transferred to Turkish Coal Administration (TKİ) from General Directorate of Mineral Research and Exploration (MTA). The power generation capacities of these additional fields are as follows:

It is estimated that, the power generation potential from domestic lignite resources is 25.000 MW and as said before, the goal of the government is to fully utilize this potential.

Electricity Generation Company (EÜAŞ) holds 8.5 billion lignite reserves on its balance sheet of which 4,8 billion is located in the Afşin-Elbistan basin. Studies are being carried out to develop these reserves as a single package and through an inter-governmental agreement (IGA).

Several public-private partnership (PPP) models are being discussed to develop these coal fields and attached power plant installations efficiently. Policymakers seek for an investor-friendly model in coal that is also to the benefit of the State. Most recently, Energy Minister Berat Albayrak stated that, "We will do our best for making indigenous coal fired thermal power plants feasible. We work on new models. There may be purchase guarantee involved in these Models. In short, we seek an investor friendly model in coal to be beneficial for the State as well.12"

It is also reported that MENR is seeking a new investment model for the operation of local coal basins such as Konya-Karapınar, Çayırhan-II Basin, Afyon-Dinar and Tekirdağ-Ergene which have been explored recently and Afşin-Elbistan in particular, and that a privatization model with the TOR method is being evaluated regarding these fields. Publicly owned companies accordingly will be founded initially for each of these basins. The public companies will be transferred to the Privatization Administration (PA) upon completion of all infrastructure and procedures such as Environmental Impact Assessment (EIA) Reports and eventually will be privatized with the TOR method on the condition that power plants are built in these areas. It is accordingly being stated that several problems that occurred in the previous models will be avoided, that investments for necessary power plants will be supported by incentives to enable the operation of basins, and that coal mines will accordingly be utilized which will represent a considerable energy potential for Turkey.13

It is also reported that, public companies subordinated to MENR that will be established for each basin will primarily update preliminary feasibility reports regarding the coal mines and power plant investments. It is stated that these companies will also have to obtain the EIA reports necessary for the investments to be realized on these fields. Investments for power plants by the private sector will thus be supported without losing any time, regarding the companies in question which are ready for any additional investments when these companies are transferred to the private sector by means of privatization.14

The proposed structure is also being crowned by a feed-in tariff support mechanism. Similar to the renewable support mechanism in place for renewable based power generation, long term electricity purchase guarantees are being discussed to further incentivize and attract the private investors to the new model. Minister Albayrak explicitly stated that purchase guarantees might be a part of the new incentive scheme.15

The goal seems appropriately to integrate the exploitation rights of the coal reserves and the respective power plants attached to the reserves. We may anticipate a rapid increase in the share of domestic coal in power generation in the next decade.

Indeed, it is not the first time that purchase guarantees are being discussed for domestic coal-fired power generation. Initially in the Law on Geothermal Resources and Natural Mineral Waters then in the Law on Building and Operating Nuclear Power Plants and Energy Sales, there were provisions for 15 years purchase guarantees for lignite-fired power plants above 1,000 MW capacity threshold. However, these initiatives did not yield the expected positive outcomes and have been implicitly terminated since their envisaged periods for commissioning are expired.

We still don't know the details of the models that the MENR are working on. However, we can still put forward some clues for success based on the international experience. First, a PPP model that could enable a fair and transparent framework based on competitive bidding should be adopted. In particular, two elements of a possible PPP structure would be critical:

It should be kept in mind that, even the most optimal model might have adverse effects on the power market structure that is being developed in Turkey for more than one and a half decade. Needless to say, purchase guarantees create a loophole in the competitive structure of the market. Renewable Energy Support Mechanism (YEKDEM) portfolio which is currently operational provides lessons for future feed-in tariff arrangements. Thus, opinions of EMRA on the incentive regime being developed for coal should definitely be taken into consideration. Energy markets, on the other hand, have become more and more technology driven during the last decades. Long term commitments, thus, are highly vulnerable to being outdated and to usher in stranded costs when the newer and cheaper technologies become available. Such concerns raise serious critics against long term coal support schemes.

Meanwhile, Turkey has taken up several commitments (although unbinding) during COP 21 meetings in Paris.16 Up to 21 percent reduction in GHG emissions from the Business as Usual level by 2030 has been set as the Intended Nationally Determined Contribution (INDC) of Turkey. Given that the energy sector accounts for around 70% of the total emissions of Turkey, policymakers have to find ways to reconcile the objectives regarding coal-fired power generation and international pledges given in Paris.

2. Even "not built" is an option given the comparative costs of building the marginal plant and the VOLL.

4. 2016 Budget presentation of the Minister of Energy and Natural Resources.

7. Generated by the author from the Overall Energy Balance excel sheets published in MENR web site.

9. 2016 Budget presentation of the Minister of Energy and Natural Resources.

11. 2016 Budget presentation of the Minister of Energy and Natural Resources.